How Does the MA Sales Tax Compare?

Massachusetts' state sales tax rate is now 6.25 percent and generated $5.2 billion in FY 2013 (the most current year with complete collections data available from the Massachusetts Department of Revenue).1 The rate was increased from 5.0 percent beginning in 2010.2 The current rate is similar to other southern New England states but higher than rates in northern New England. There is a range in state-level general sales tax rates across the rest of the US as well. While five states, for example, have a state-level rate of 7.0 percent—well above the Massachusetts rate—fourteen states have rates below 5 percent (including four states that have no sales tax at all).3

Tax rates themselves, however, are not an especially useful measure by which to compare the actual impact of taxes in different states. While only some dozen states have state-level general sales tax rates equal to or higher than Massachusetts,4 a number of factors make the actual impact of the Massachusetts general sales tax smaller than in almost every other state: 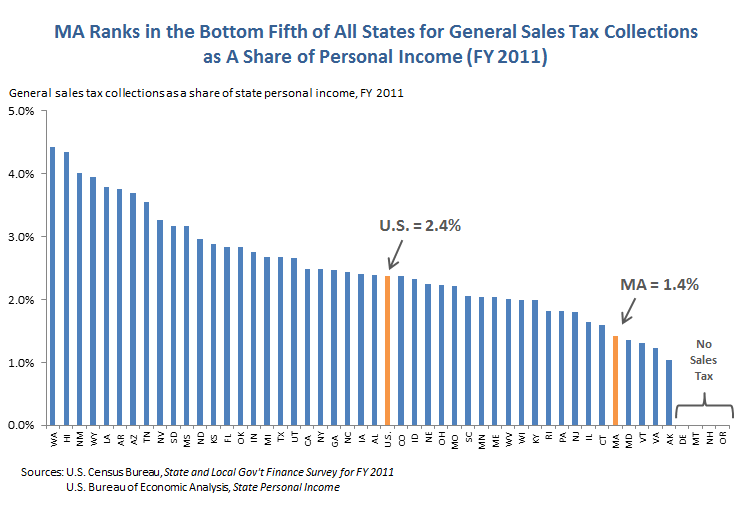 Who Pays The General Sales Tax?

Analysis performed by the Institute on Taxation and Economic Policy (ITEP) finds that, on average, in 2012 Massachusetts families in the lowest 20 percent of incomes paid 1.8 percent of their incomes in direct general sales taxes.6 The share of income going to direct general sales taxes drops off steadily as income rises, with the top 1 percent paying only 0.3 percent of their total income toward these taxes (see chart, below).

This can be explained by the difference between the consumption requirements of low vs. high-income taxpayers. People with low incomes usually must spend all of their income in order to make ends meet (or even more than their total income in some years, if borrowing and use of savings is taken into account). This means that much of their income becomes subject to the sales tax through the purchases they make. People with high incomes, by contrast, typically spend only a portion of their income, saving or investing the remainder.

The overall effect of the general sales tax therefore is regressive, with poorer people paying more of their income toward this tax than do richer people. At the same time, reducing the sales tax rate would reduce state revenues. Unless these sales tax revenue losses were offset with revenue increases (most likely from other tax sources), the state would have to reduce spending on programs and services, many of which directly benefit low and moderate income people. 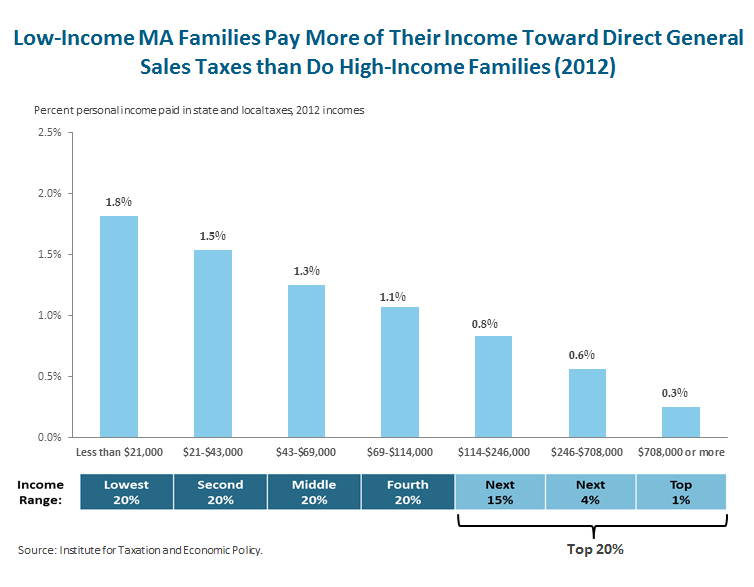 2 The new GST rate took effect on August 1st 2009.  Along with the change in Massachusetts law that increased the state sales tax from 5 percent to 6.25 percent, localities were permitted to adopt both a "local option" tax of 0.75 percent on meals and raise their hotel room tax from 4 percent to 6 percent.  At the same time, the sales tax was extended to include alcoholic beverages sold at package and liquor stores, but this provision was repealed through ballot initiative, effective for sales on or after January 1st 2011.