The state budget, and the taxes that fund it, are the primary way we pay for the things that we do together through government. These include providing education; building and maintaining public transportation, roads, and bridges; and helping people get back on their feet when they face hard times. Funding for these services has lagged, however, because of decades-old tax cuts.

In the late 1990s and early 2000s, the Legislature adopted a series of cuts to the state personal income tax. These cuts have played a major role in reducing the revenue available to fund the state budget and, as a consequence, have severely limited the capacity to fund essential services in the Commonwealth.

Four of these income tax cuts have been and continue to be particularly costly to the Commonwealth:

In the current fiscal year (FY 2019), these four tax cuts together will deprive the Commonwealth of $4.15 billion in annual revenue. 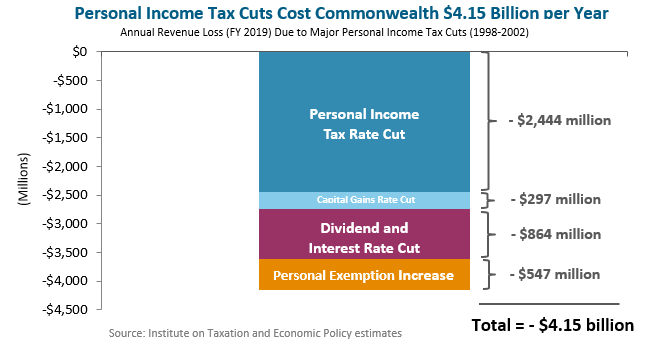 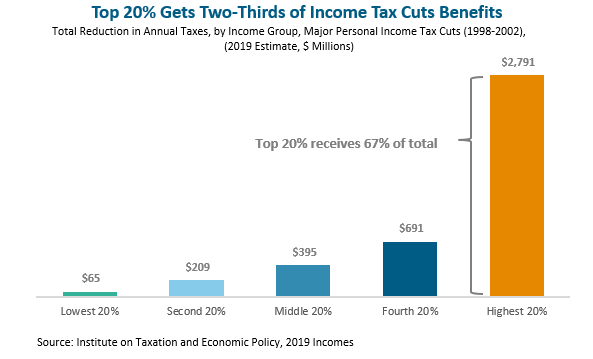 These income tax cuts are part of the reason Massachusetts has an “upside-down” tax structure," one that on average collects the smallest share of household income from those with high incomes, and larger shares of household income from low- and moderate-income households. As a whole, the major income tax cuts adopted during the late 1990s through early 2000s — because they focus such a large share of total tax reductions on high-income households — have added to the upside-down nature of the Massachusetts tax system rather than helping turn it right-side up. (While increasing the personal exemption improved tax fairness, it nevertheless resulted in a substantial revenue loss. See Endnote 3, below.)

Notably, the upside-down nature of the tax system disproportionately and negatively impacts communities of color. Due to a long history of systemic barriers to opportunity -– barriers that have prevented many people of color in Massachusetts from equitable access to high-paying jobs, education, and other avenues leading to higher household income -- Black and Latinx workers today are over-represented among low-income taxpayers and underrepresented among higher-income taxpayers. These tax cuts therefore add to racial and ethnic income inequalities in the Commonwealth. 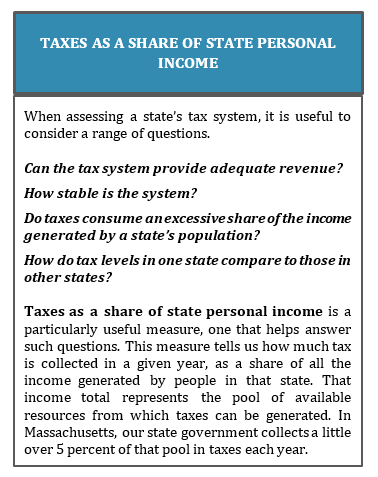 In addition to these tax cuts resulting in the loss of $4.15 billion in annual revenue, other factors also have affected state revenue collections in the years since 1998. These include state-level tax policy decisions, as well as changes in consumer spending patterns and in the structure of the Massachusetts economy.

Though there have been several tax increases over this period — including increases to the state sales tax and gas tax, among others — other changes have added to the revenue losses described above. These include consumer shifts toward online shopping, changes in how businesses structure themselves and thus how they are taxed, and the growing concentration of income gains among the highest income households. The net effect of all tax increases and reductions since 1998 (combined with other factors affecting state tax revenues and economic growth) is that total state tax revenue as a share of state personal income has declined (from 6.3 percent in FY 1998 to 5.2 percent in FY 2019). Today, state tax collections are equivalent to a significantly smaller share of our state economy than they were 20 years ago. This decline will amount to a loss of $5.95 billion in annual tax revenue for the Commonwealth in FY 2019.4 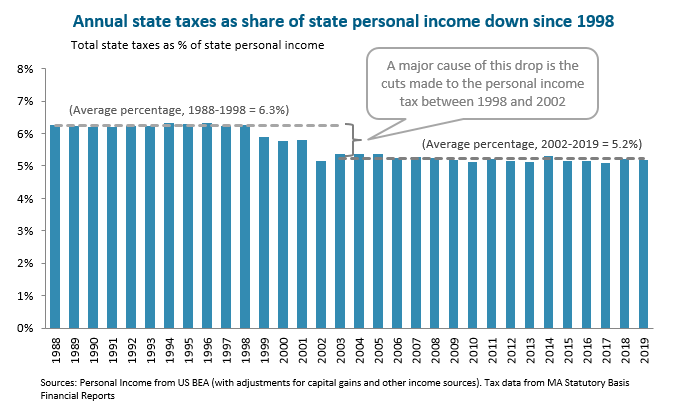 This substantial decline in potential revenue collections has played a role in producing ongoing fiscal challenges for the Commonwealth — including severe shortfalls during economic downturns. In response to these chronic and acute budget shortfalls, state lawmakers have allowed inflation-adjusted funding to decline markedly in many program areas across the budget, such as local aid, public health, environment and recreation, and higher education. While some areas of the budget have seen very substantial funding increases — for example, health care expansion and reform, and areas within human services — revenue constraints have prevented the Commonwealth from funding these priorities while also maintaining investments in other key areas. Deep cuts in funding for essential public investments can compromise the state's long-term growth potential and harm the current and future well-being of the people who live and work in Massachusetts. (For more detail on historical funding levels for various areas of the state budget, see MassBudget’s interactive Budget Browser.)

1The Massachusetts Department of Revenue (DOR) expects the relevant thresholds for revenue growth will be met during 2019, which will trigger a further and final rate cut to 5.00 percent on January 1, 2020. DOR estimates this additional rate reduction will result in a further annual revenue loss of $185 million. (See DOR Commissioner’s Consensus Revenue Hearing testimony from Dec. 5, 2018, pg. 7: https://www.mass.gov/lists/dor-briefing-book#fy2020- )

3Given the wide income inequality in Massachusetts (and the U.S. as a whole), it is not altogether surprising that reductions in taxes that are levied on personal income would disproportionately benefit those collecting a large share of total income. Nevertheless, it is possible to design tax cuts – including personal income tax cuts - that target reductions toward low- and moderate-income households, rather than on the highest income filers. The increases made to the personal exemption amounts are a good example. While costing the Commonwealth some $550 million in forgone annual revenue, this set of changes delivers only 8 percent of the total benefits to the highest income 5 percent of households and 70 percent of the benefits to the bottom 80 percent of households.