MA Poverty Down, Incomes Up Substantially in 2016

The new ACS data on poverty show marked improvement over 2015. For Massachusetts, the official overall poverty rate (as opposed to the Supplemental Poverty Measure, see further discussion below) fell over 1.1 percentage points from 2015 to 2016. This is a significant drop. After holding stubbornly between 11.4 percent and 11.9 percent from 2010 to 2015, the Massachusetts poverty rate is finally nearing its pre-recession level.  Only 7 states have lower poverty rates than Massachusetts (which is tied for 8th-lowest with New Jersey).

Massachusetts has increased its minimum wage one dollar each year since 2014, from $8 to $11 in 2017. As MassBudget reported in State of Working Massachusetts 2017, the only times since 1990 that wages among the lowest-earning 10 percent of Massachusetts workers have increased have followed statutory increases in the state’s minimum wage.2 (See the Wages and Income section of the report.)

Another recent study found that increases in the minimum wage sharply reduce poverty among working-age adults.3 It appears likely that the 1.1 percent decline in the Massachusetts poverty rate from 2015 to 2016 is in part due to the state’s recent minimum wage increases. (Other factors could include a labor market that has been continuously tightening since the Great Recession, as discussed in the Jobs and Employment section of State of Working Massachusetts 2017.)

The child poverty rate in Massachusetts showed a statistically significant drop between 2015 and 2016, from 14.5 percent of children (under 18) to 13.3 percent. This rate is still higher than child poverty in 2007, before the Great Recession, when poverty was 12.6 percent. (To read more about the childhood poverty rate, see MassBudget’s factsheet, “Improvements for Our Children, Fewer in Poverty; Almost All Insured.”)

The new data also demonstrate the degree to which federal and state policies help individuals and families pay for basic necessities. In addition to the official poverty measure, the Census Bureau uses an alternative measure of poverty called the Supplemental Poverty Measure (SPM). Unlike the official measure, the SPM accounts for differences in the cost of living among regions; includes a variety of everyday expenses (like clothing, housing and utilities); and factors in various forms of income support that are not included in the standard poverty measure (like SNAP—formerly known as “food stamps”; the Earned Income Tax Credit (EITC); the Child Tax Credit (CTC); and housing supports).

Overall, for the U.S., these income and work support programs keep millions out of poverty. The cornerstone of our national safety net is Social Security, a program that lifted 26.1 million people above the poverty line in 2016, including over 17 million seniors. The Earned Income Tax Credit and the Child Tax Credit combined to lift 8.2 million people, including 4.4 million children, above the poverty line. The following chart shows the number of people each program kept out of poverty nationally in 2016.

While state-level estimates for the impacts of these programs are not yet available for 2016, older data offer a window into the important role they play here in Massachusetts, particularly for children. From 2009 to 2012, these programs and credits together kept an average of 918,000 people in Massachusetts above the poverty line each year, 199,000 of whom were children. More specifically, 141,000 and 148,000 people in Massachusetts were lifted above the poverty line due to SNAP benefits and the EITC and CTC, respectively (see chart below). 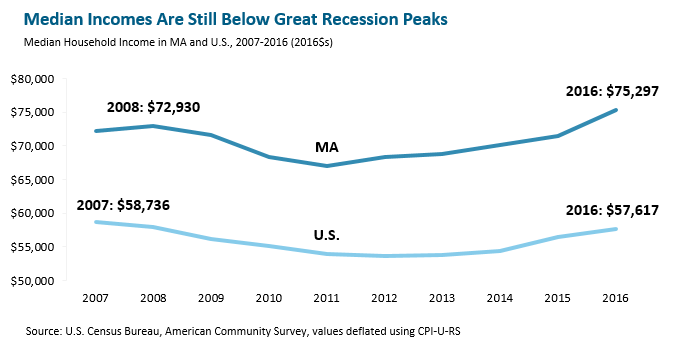 As in past years, Massachusetts is among the states with the highest median incomes in the country, ranking 4th in the new ACS data. This makes sense because in 2016 Massachusetts became the first state ever where a majority of the workforce held bachelor’s degrees. Massachusetts workers with college and advanced degrees earn about twice as much as workers with only a high school diploma. And nationally, the states with the best-educated workforces also, as a rule, have the highest wages. (See the Education and the Economy section of State of Working Massachusetts 2017).

1Today’s ACS-based estimates differ from the Current Population Survey (CPS) estimates released by the U.S. Census Bureau two days ago. The two surveys employ different designs, asking people somewhat different questions, which produces somewhat different results. The ACS is considered the best source for state-level estimates. The CPS is the official source for national data. In order to provide apples-to-apples comparisons between Massachusetts and the nation as a whole, in this factsheet MassBudget supplies ACS-based estimates for both.

3Arindrajit Dube, “Minimum wages and the distribution of family incomes in the United States,” April 2017.