Median Household Income Dropped in Massachusetts and the U.S. in 2010 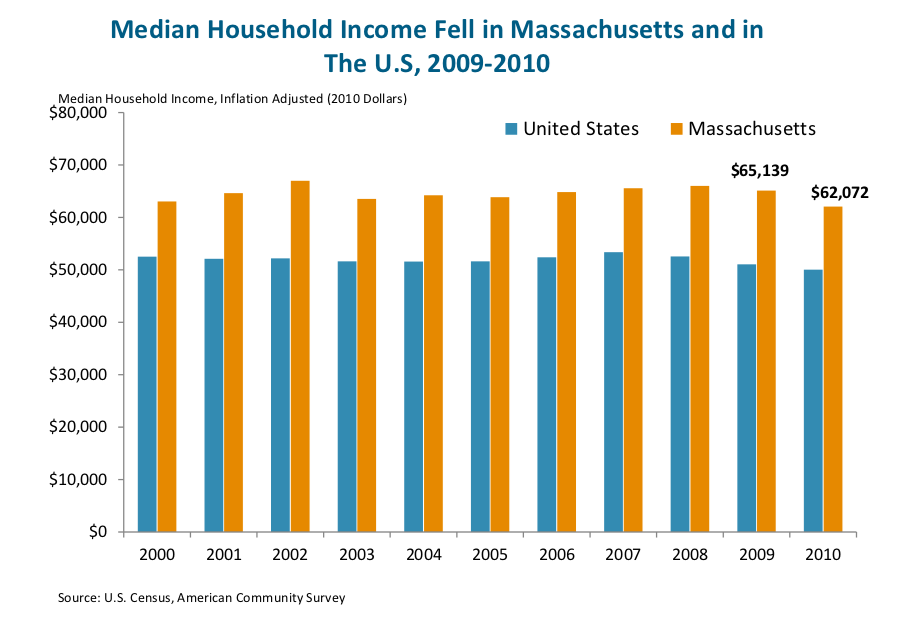 Despite the drop, Massachusetts’s 2010 median household income continued to compare favorably to those of other states, as shown in Figure 2, remaining among the highest in the nation. 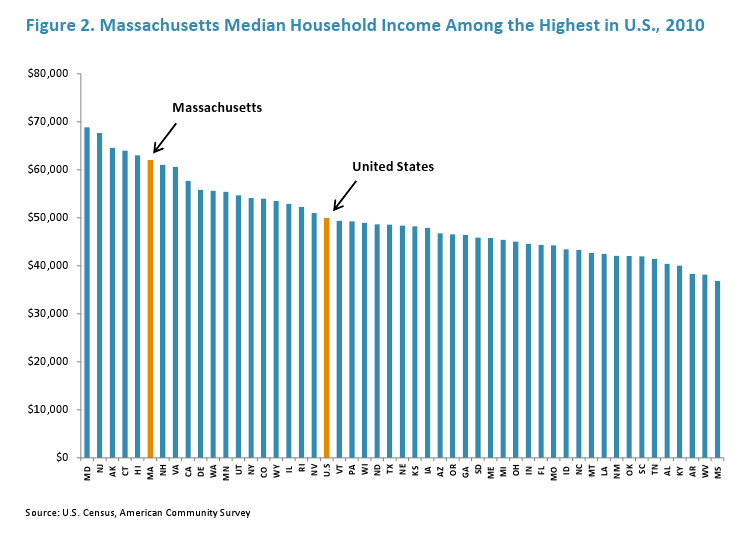 All dollar amounts in this summary are expressed in constant 2010 dollars. Inflation adjustments are made using the Consumer Price Index for all urban consumers (CPI-U).

The Census Bureau’s recent data on household income derive from two main sources: the Current Population Survey (CPS) and the American Community Survey (ACS). The CPS is the older of the two surveys -– dating back to the 1940s -– and is therefore a more reliable source for making comparisons over longer periods of time (though, due to sample size constraints, data is best pooled over two or three years to do so). The CPS is also the official source for national poverty and income data. However, the ACS is based on a larger sample and is thus able to provide information on a state and sub-state basis that does not have to be pooled over multiple years.

Median household income is a statistical measure indicating the exact middle of the range of all household incomes, such that half of all households have incomes below the median and half have incomes above the median. Under the Census Bureau’s methodology, income refers only to before-tax money income and therefore does not include reductions (or increases) in net, take-home income due to tax liabilities (or credits), or the value of non-cash benefits such as Medicaid or food stamps.

At various points in this analysis we refer to whether or not the difference between two estimates -- usually from two years -- is statistically significant. Because the CPS and ACS data are based on surveys of a random sample of individuals meant to represent an entire state or the nation, one cannot be certain that the estimate produced by the sample is the actual rate for the entire population. For each number they publish, the Census Bureau therefore includes a "margin of error" using a 90 percent confidence level. A “90 percent confidence level” means that there is a 90 percent likelihood that the true population measure falls within the margin of error.

When two estimates (for example, a single measure such as median household income, taken in two different years) are compared, we must determine how certain we are that any difference reflected in these sample estimates actually denotes a true difference in the real population. Using the margins of error, we can calculate whether the two measurements reflect a true difference in the real population (in this case, at the 90 percent confidence level) rather than an artificial difference occurring by chance in two random samples. When we say that two estimates do not show a “statistically significant difference,” we therefore are saying that we cannot be certain that the estimates -– even though numerically different –- provide an accurate measure of a real difference in the true population.