Declines in Spending on Early Education & Care in Massachusetts

Early education and care is an essential resource for both children and parents.

For Parents: Early education and care makes it easier for parents to work, giving them the support they need to seek and keep jobs, to improve their economic circumstances, and to provide for their families. This kind of support has become even more important since welfare reforms of the mid-1990s, which encouraged welfare recipients to join the workforce.

Looking at trends in state and federal funding for early education and care programs in Massachusetts, we find that:

Prior to welfare reforms in the mid-1990s, early education and care was a relatively small piece of the safety net with cash assistance being the primary support for families receiving Aid to Families with Dependent Children (AFDC). As figure one shows, in FY 1995, after adjusting for inflation, the state provided $975 million for cash assistance while early education and care received $284 million.2 The introduction of Transitional Aid to Families with Dependent Children (TAFDC) in 1995 marked a change in policy away from providing parents money to stay home and care for their children and towards encouraging—and requiring—work. Time limits and work requirements forced parents to work, elevating the importance of early education and care and other supports which would allow parents to enter or stay in the workforce. 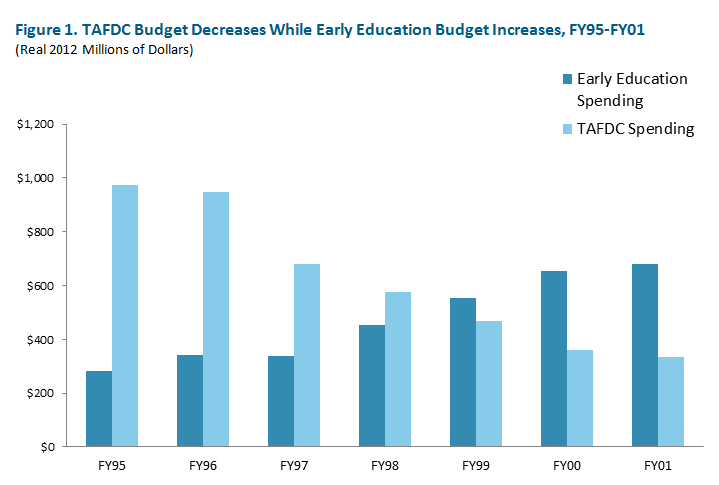 Between 1998 and 2002 Massachusetts implanted a number of cuts to the income tax, costing approximately $2.5 billion in revenue each year. Massachusetts cut the personal income tax rate from 5.95 percent to 5.3 percent resulting in a $1.3 billion annual loss, cut the dividends and interest tax rate from 12 percent to 5.3 percent for a $750 million annual loss and expanded the personal exemption costing about $480 million annually.3

In the decade following these tax cuts, state spending on early education and care declined by over $174 million, more than 25 percent (figure 2). 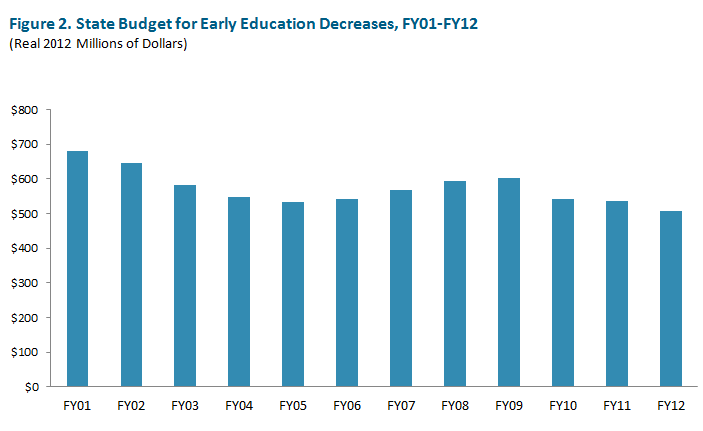 Cash assistance, which experienced huge spending cuts during the previous period as the number of recipients was cut in half, remained largely unchanged from FY 2001 to FY 2012 (Figure 3). It should be noted that although the number of families receiving assistance was cut by more than half from 103,558 in 1994-95 to 49,774 to 2009-10, the number of families with children in Massachusetts in poverty remained nearly unchanged (113,150 to 111,377).4 The decrease in cash assistance has not come from more families climbing out of poverty.

Accessing child care is extremely important for families trying to climb out of poverty, but cuts to early education and care over the last decade have made it more difficult for families to get that support. Today well over 40,000 children in Massachusetts are on a waiting list for child care. While state policies aim to support and encourage work, all too often parents who need affordable care to be able to work do not have access to such care. In fact, since January 2011 the state's income eligible child care voucher program has been closed to new families.5 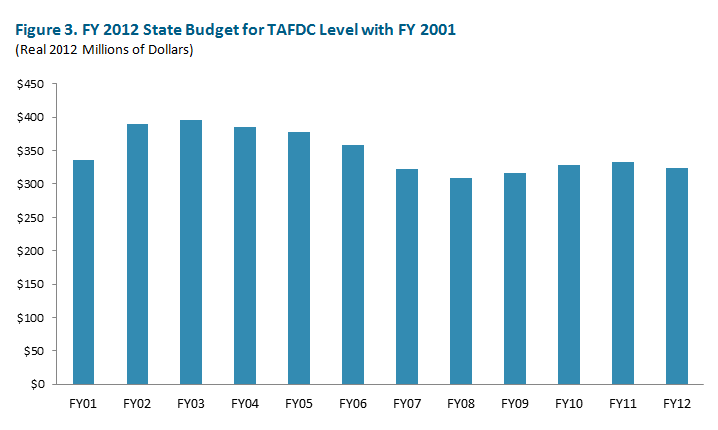 Federal and State Funding for Early Education and Care 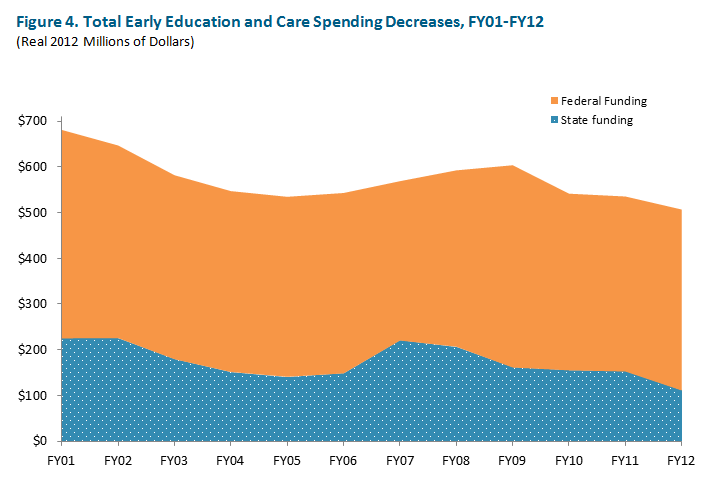 Although funded through both state and federal sources, the vast majority of early education and care funding, currently around 80 percent, comes from federal sources. As Figure 4 indicates, between FY 2001 and FY 2012 federal funding decreased approximately $60 million (13 percent) from $456 million to $396 million. The federal reduction can be traced to the lack of an inflationary adjustment in TANF, the largest source of federal funding.

The decline in state funding has been significantly steeper than the federal decline largely due to state income tax cuts which decreased revenue significantly. Whereas in FY 2001, the state contributed over 33 percent of the total early education and care budget, by FY 2012 that percentage had dropped to under 22 percent. In fact state funding decreased over 50 percent during this time from $225 million in FY 2001 to $111 million in FY 2012 (See Figure 5). Even though state funding makes up much less than half of budgeted spending, the $114 million state decrease accounts for almost two-thirds of the total decrease in spending since FY 2001. 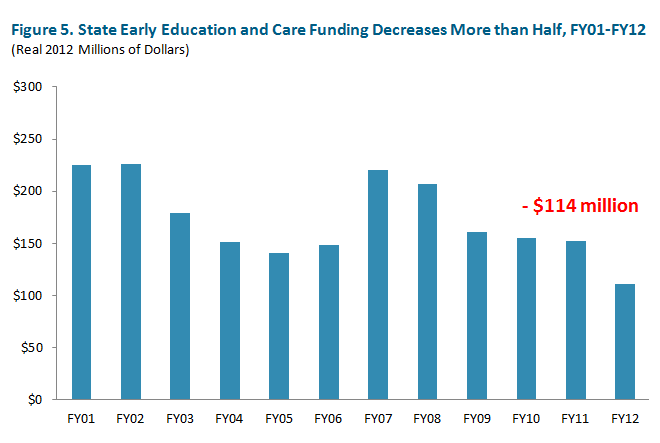 Early Education and Care, and Cash Assistance Spending Decrease Sharply as a Share of Personal Income

When examining spending over time it is often valuable to consider what we dedicate to particular objectives—such as providing quality early education and care to working families—in the context of our overall resources. Over time, our economy grows. In that context we make choices, as a state, about whether to dedicate the same share of our resources to the things we do through government, or to increase or decrease that share.6 Therefore, it is useful to ask, if we were dedicating the same share of our overall resources (personal income) to early education and care and to cash assistance that we were dedicating to those supports for low income families before welfare reform, what would we be spending today? As Figure 6 shows, in FY 1995 spending on these two program areas together accounted for 0.47 percent of the state economy. By FY 2012 the share had dropped to 0.21 percent. 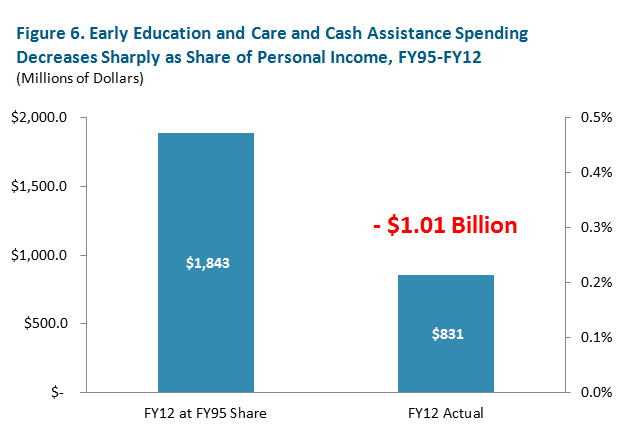 Most discussions of early education and care funding eventually center on two main areas affecting the service received by children and families: access and quality. 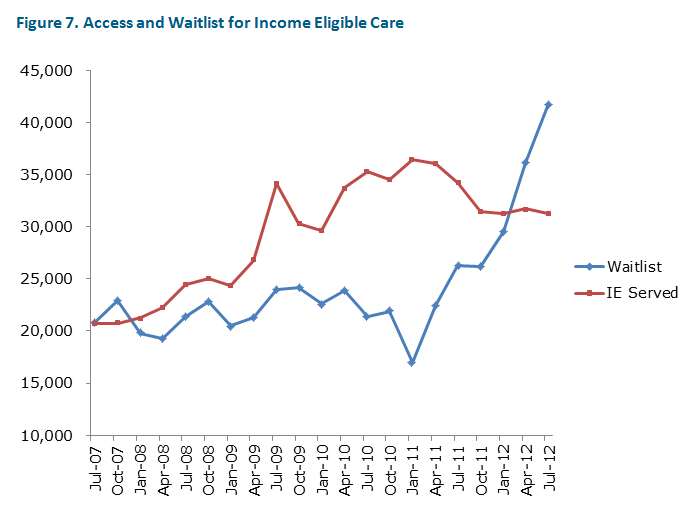 Access to care is extremely important for families. However, the quality of care that families can access is even more important for the long term development of children receiving care. Many studies note the link between high quality early education and later child success in school and life.11 Although the exact elements that define high quality are still debated, one quality widely recognized as a key element is the training and professional development of early education teachers.12

The new Quality Rating Information System (QRIS) used by the Department of Early Education and Care standardizes quality measures making it easier and more efficient to evaluate program quality for licensed providers of care.13 Five key indicators along with other standards are used to evaluate programs and determine each program's quality rating.14 The amount of formalized early childhood education of teachers is one of the key indicators.

This main driver of quality also serves as the primary cost driver for early education and care providers making high quality care expensive. The single largest expense for providers is teacher salaries and teachers with more training in early childhood education receive the highest salaries. On the flip side, providers receive almost all of their revenue from rates charged to families or subsidized payments by the state. In Massachusetts, receiving state subsidized payments at below market rates makes it difficult for providers to attract and pay teachers with higher degrees of training—potentially impacting the quality of care available for children using a subsidy to access care.

The federal Administration for Children and Families suggests states reimburse providers at a rate which would provide families access to 75 percent of the available facilities in their local area.15 In Massachusetts, for center based care, there are 6 regions and 3 age groups for children under school age which means there are 18 different rates paid to center based providers in the state. Of those 18 rates - none meet the 75 percent threshold.16 In fact, none of the 18 reaches the 50th percentile. Only one rate paid by the state exceeds the 30th percentile. Another 8 give access to between 10 and 20 percent of the facilities in the local market, and half of the 18 (9 price points) are set so that families have access to less than 10 percent of the available care facilities in their local market for their child. Reimbursement rates for family based providers are slightly higher, but none reaches the 75 percent threshold.17

Having consistent care for children before they reach school age has always been important for working parents. In 1995, access to early education and care became even more important due to changes in public assistance introducing work requirements for families receiving assistance.

The decrease in spending is having a detrimental impact on families. In the last decade more children have been added to a waitlist for care. In fact more children are currently on the waitlist then receive a subsidy through the Income Eligible program. Quality is also affected as rates paid by the state to providers are well under market rates making it difficult for providers to hire, train and provide ongoing professional development opportunities to early education teachers.18 What does all this mean for children and their families? For those who receive support - their children may still not receive the high quality early education and care that is most likely to lead to long term success in school and life. And for families who are put on the waiting list—parents will have difficulty finding and keeping work and children will not receive educational opportunities that can help prepare them for kindergarten and beyond.

1 In his accompanying paper, Arthur MacEwan summarizes some of this research and documents the large economic benefits of early education and care. See "Economic Gains from Early Care and Education."

2 Throughout most of the paper funding amounts are adjusted for inflation to 2012 dollars unless otherwise noted. The spending comparison between 1995 and 2012 of early education and care, and cash assistance combined (Figure 4) is measured as a share of the economy.

3 For more information on the tax cuts, see our factsheet.

4 A main of goal of welfare reform was to help families with children join the workforce and thus climb out of poverty. As can be seen, although the number of cases decreased&3151; the ultimate goal for many families has not been realized as poverty rates in Massachusetts have stayed level.

5 Although the voucher system is closed—children on the waiting list may still have the opportunity to receive child care through a contracted slot. Slots are contracted with specific providers who have a set number of spots available for children receiving a subsidy. When a spot opens up the state can fill that spot with a child on the waiting list.

6 For more information about using personal income to compare spending levels, see MassBudget's "Adjusting for Personal Income: When, Why, and How."

7 Families served by TAFDC are also low income working families—although many families are exempt from work requirements. For a list of exemptions, see here.

8 The chart below is taken from a Department of Early Education and Care Board Presentation October 2012.

9 Many factors contributed to the decrease in caseload during this period. The improving economy of the late 1990s and EITC expansions in 1990 and 1993 are two external factors which impacted TAFDC caseload levels. A few of the internal TAFDC policies which impacted caseload levels include: time limits, work requirements, and the decreasing value of TAFDC assistance—which is not adjusted for inflation. For more information about caseload changes, see here, here (p3), and here.

10 Families seeking support can utilize a voucher or a slot. A voucher allows families to choose any provider that will accept a state subsidized placement. A slot is an opening at a specific provider. Slots cannot be transferred to other providers.

13 The effectiveness of QRIS is still to be determined as it has only recently been implemented over the entire state. However, a QRIS system has been implemented in over twenty states and comes from research highlighting key practices linked to high quality education.

14 The five indicators are: 1) Curriculum and Learning, 2) Safe, healthy indoor and outdoor environments, 3) Workforce development and professional qualifications, 4) Family and community engagement, and 5) Leadership, administration and management. There are currently four levels of quality and programs must meet all criteria of one before qualifying for a higher rating.