Note: throughout this brief, terms in bold are defined in the glossary at the end of the report.

As part of implementing the Commonwealth’s new school funding law, the Student Opportunity Act (SOA), the Governor proposed increasing Chapter 70 aid by $303.5 million over current levels in the Fiscal Year (FY) 2021 budget. In this first year, the Governor delivers on one-seventh (14 percent) of the SOA reforms in most areas —special education, health care for educators, social-emotional support, and increments for English Language Learners — keeping those reforms on track for full implementation in seven years.1

However, not all of the SOA reforms are consistently or equitably phased in by the Governor’s proposal despite this goal being outlined in the law.2 One critical area that is not on track — increased support for students from low-income families through Low-Income Rates. In his FY 2021 budget proposal, the Governor only delivers on 4 percent of the progress towards the SOA target.3 This leaves 96 percent of the change left to be accomplished over the next six years.

According to a preliminary analysis of the funding proposal, slowing the low-income rate progress down to 4 percent from 14 percent, results in a reduction in aid of $73.6 million.4 This reduces the capacity of districts educating children who are economically disadvantaged, to enhance services, expand opportunities, and promote achievement. The Commonwealth would need to increase Chapter 70 aid by $377.1 million (24 percent more than Governor Baker proposed) to phase-in low-income rate increases at an equal pace as the other components (see chart below).

The Governor’s proposal to increase low-income rates 4 percent towards the target in the first year, while leaving an average of 16 percent each year to follow, does not meet the objective of consistent implementation. This is particularly true when the other areas are moving an even 14 percent towards the goals of the SOA.

Justification for Inconsistent Funding is Misguided

The consistency and equity of the proposed phase-in is particularly worrisome because the low-income rates provide districts with funding they need to enhance services for children who are economically disadvantaged. Delaying extra funding for these youth cuts against the larger goal of the SOA and school finance system at large, to provide all kids, regardless of their background, the resources and support necessary to achieve academically and succeed. A low-income district hoping to expand learning time, for example, would have fewer resources in FY 2021 to extend the school day or partner with after-school providers with 4 percent of SOA low-income funding instead of 14 percent. 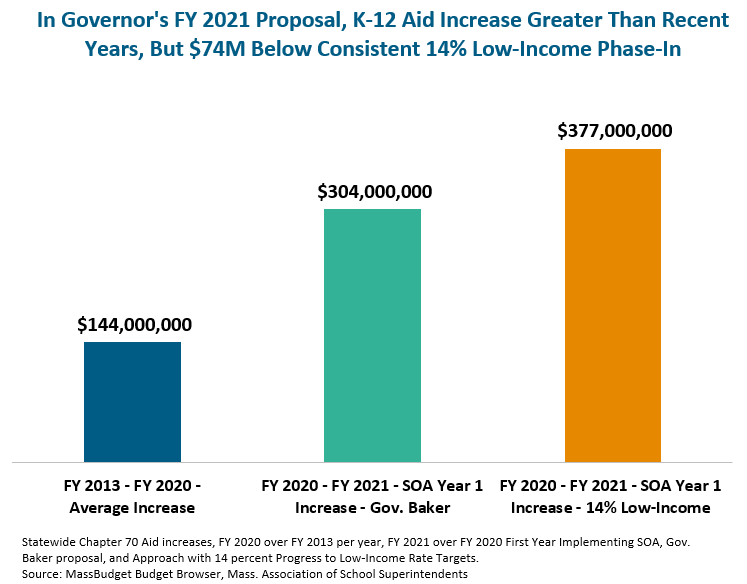 With consistent (14 percent) phase-in of low-income rates, about 100 districts would gain more aid than under Governor Baker’s approach, while about 200 districts would see no additional aid. Due to the interaction of the overall size of the Foundation Budget and how much cities must contribute locally, a handful of districts would have to contribute more local funding and would face a slight reduction in state aid. Gateway City communities, generally lower wealth urban districts that serve many students of color, would gain $65.9 million above the Governor’s proposal with the 14 percent implementation approach.

The justification provided by the Administration for uneven progress on low-income rates rests on questionable assumptions. In his proposal, the Governor pointed to the immediate shift to defining low-income kids as those up to 185 percent of the Federal Poverty Level (FPL) from the previous 133 percent FPL.5 This assumes that raising this threshold to count more children as low-income, counteracts the need to raise low-income rates at the same level as other portions of the formula. This defies the fact that both identification of low-income students and the adequate resources for each student are both necessary to deliver appropriate services. These are also separate policy areas within the SOA.6 Targets for low-income rates in the SOA are concrete dollar figures, ranging from $3,500-$8,800 (in FY 2020 dollars) depending on the share of district enrollment identified as low-income. 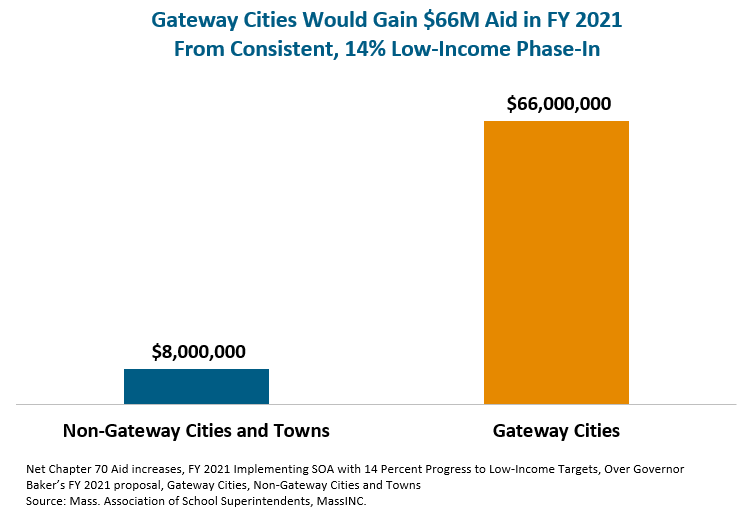 Arguing that increasing the number of low-income students counted lessens the need to consistently phase in the low-income rate in the SOA is unwise. Practically, the state must have three key components:

There is reason to expect that enrollment data on which the Governor’s low-income rate delay is based on in FY 2021, are likely to shift significantly in the next year and beyond. The SOA directs the Department of Education to unveil a new process to accurately count the number of low-income students in each district starting in FY 2022.7

Overall low-income enrollment increased by 46,800 students between FY 2020 and the FY 2021 Governor’s proposal.8 Of these students, around 37,300 were identified by using the higher threshold of 185 percent FPL. However, the specific counting process for FY 2021, outlined in the SOA, uses data that is at least five years old.9 Critically, the SOA outlines that this old data can only be used as a stopgap in FY 2021.

Counts of low-income kids could shift significantly once the Department of Education develops its new process for identifying students in FY 2022. This new counting system could put districts in a difficult position if it holds down their state aid. This could happen if there are inflated funding increases in FY 2021 based on temporarily higher counts. These types of increases may not be sustained under the new counting system.

The temporary nature of the FY 2021 poverty count makes it particularly unsuitable as a rationale for slowing down progress towards greater support for low-income students outlined in the SOA.

The Administration’s approach is not the only way forward. As discussed above, the FY 2021 budget could include an even 14 percent of the progress towards the low-income rate targets. This would keep the Commonwealth on track to achieve the ambitious vision of the SOA — with our disadvantaged students at the forefront. This could add $73.6 million to FY 2021 allocations, particularly benefiting districts that serve many low-income students and that have faced great budget challenges in recent years.10

Keeping the promise of the SOA, while also investing in key priorities like transportation, housing, affordable childcare, and higher education, requires that Massachusetts raise adequate and progressive revenue to support the state budget. MassBudget has outlined numerous opportunities for our state to raise revenue in a progressive way.11 Such proposals ask those who pay less in taxes today, and who have gained an outsized share of wealth and income in our state, to pay their fair share. That is a key pillar of how we can ensure all students, regardless of their income, race, and family background, are able to succeed in their education, career, and life.