Does it Make Sense to Collect Bus Fares?

This report examines how public transit is a public good and how other public goods are often made free to encourage their use and promote equity. This introduction to the Does It Make Sense to Collect Bus Fares? series also discusses experiences with eliminating bus fares in Massachusetts, as well as in public opinion.

Eliminating fares on Massachusetts Bay Transportation Authority (MBTA) and Regional Transit Authority (RTA) buses makes sense for practical economic reasons as well as for equity and environmental sustainability. The resources spent collecting bus fares don’t serve any transportation function. Selling bus passes and tickets, verifying and collecting them, and enforcing fare payments do not help transport bus riders more quickly or safely to their destinations. On the contrary, bus fares discourage people from using the bus, and fare collection slows down travel while making it more stressful and inconvenient. Everything related to fares diverts resources that could otherwise provide more and better service.[1]

Unlike with transit, no fees are collected to enter city parks or libraries, or to attend public K-12 schools, ride a public elevator, use a public garbage receptacle, or report a fire. These public services are free, partly as a matter of public right and additionally to encourage their use as a public good.

In fact, passengers pay fares on public buses and rail largely because several generations ago this was the practice on the trolleys and streetcars that had been private. Mass transit continued to play a vital role once auto ownership became widespread, but it has become less and less viable to support this service through fares.

Public transit is also a public good that helps the environment, traffic congestion, and public health. The Commonwealth has committed to the goal of reducing emissions from the transportation sector, a goal which can be advanced by greater use of public transit.

Many reasons to make buses free

There are strong economic, equity, environmental, and public health reasons to encourage public transit ridership by eliminating bus fares. Automobiles create enormous costs that are not reflected in the prices faced by drivers. Emissions from the transportation sector are Massachusetts’ largest and fastest growing source of global warming pollution, with cars and trucks the major source. More driving also leads to more deaths and injuries from collisions, to increased asthma, polluted runoff, and other problems. Emissions and health impacts are much smaller per passenger mile for buses, especially when ridership is high.

Enhancement to public mobility is a form of “public good” that helps people by connecting communities and enabling people to get where they want to go. Our economy also works more efficiently when customers and workers can more readily get to places of work or go shopping. This effect may go underappreciated because business owners rarely know about the employee or a customer they never had who was discouraged because they had to pay a fare.

Compared to fares on trains or subways, fares on buses are generally more cumbersome to collect, cause greater service delays, are the most inequitable, and their revenues are relatively more modest.[2] 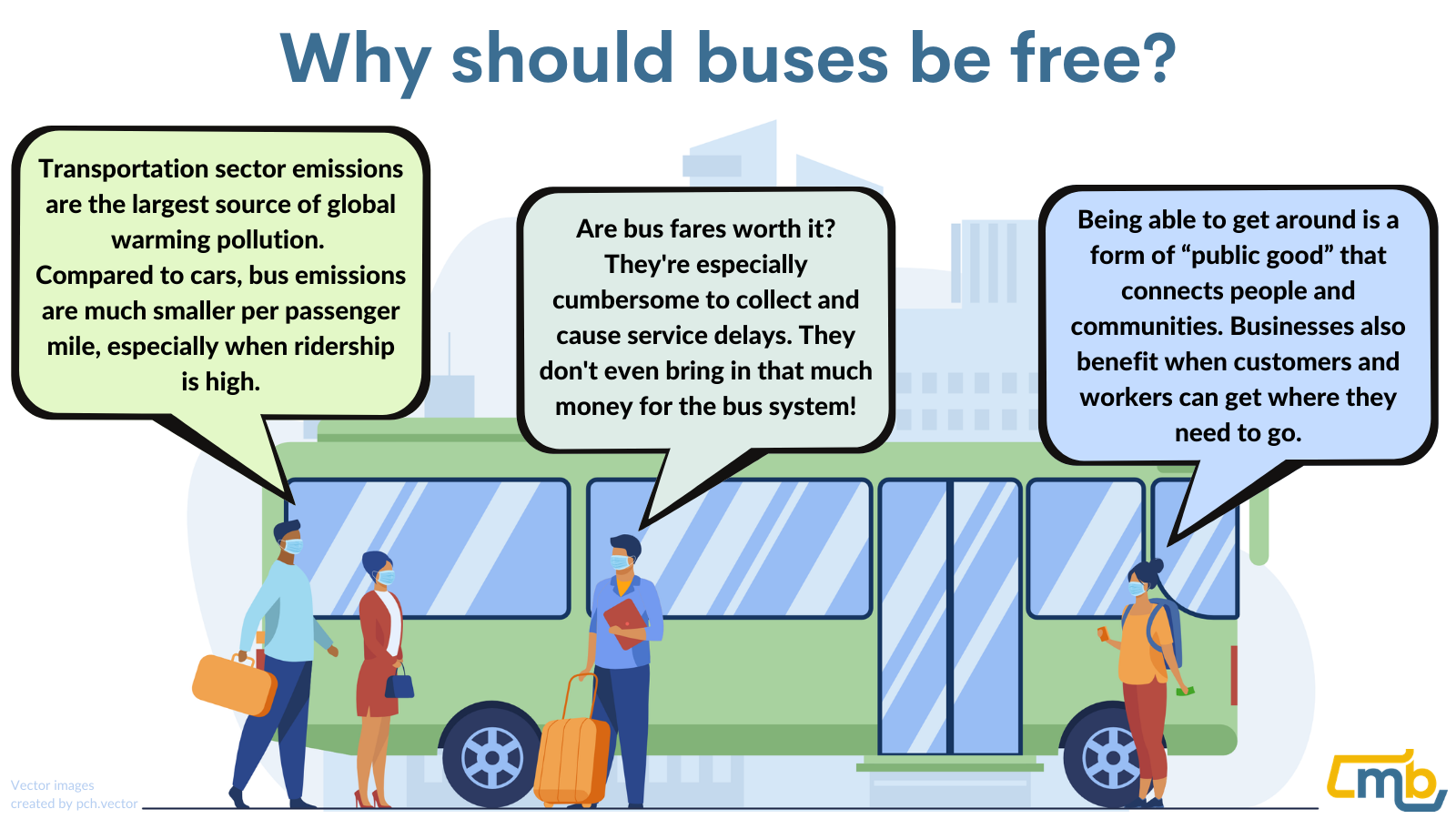 Fare-free buses is an idea that has been catching on in current opinion and practice. During the early months of the COVID-19 pandemic, public buses stopped collecting fares except on the Nantucket and Berkshire RTAs, using automatic passenger counters to track ridership. The Worcester RTA Advisory Board voted to extend fare-free service through June 30, 2021.  Starting in 2012, buses stopped collecting fares at Logan Airport’s Silver Line stops. A successful 2017 fare-free pilot program on another Silver Line route for two weeks resulted in faster , more reliable travel and greater rider satisfaction. Three major bus routes have been fare-free in Lawrence since 2019. Dozens of other places around the U.S., such as Kansas City and the Upper Valley region of Vermont and New Hampshire, have introduced fare-free service. Massachusetts’ U.S. Representative Ayanna Pressley and Senator Ed Markey proposed the Freedom to Move Act to finance improved transit service and compensate transit agencies for lost revenue when they eliminate fares.

[1] This paper is most focused on bus fares, but most of the findings pertain – usually less strongly – to other forms of public transit, such as subways, commuter rail, light rail, and even ferries.

[2] On the MBTA, the exception is the surface Green Line and the Mattapan trolley.