Who are ITIN filers?

Immigrants in Massachusetts have shouldered an outsized risk as frontline workers during the pandemic. Yet thousands of immigrants and their families who work and pay taxes are prevented from receiving important support through the Earned Income Tax Credit (EITC) because they are ineligible for a Social Security Number.

The law requires all wage earners to pay taxes, regardless of immigration status. The Internal Revenue Service provides immigrants who are ineligible for a Social Security Number with an Income Tax Identification Number (ITIN) so they can comply with tax laws.1 Immigrants paying taxes with an ITIN are taxed the same as any other taxpayer.  Paying taxes with an ITIN also helps immigrants document their physical presence and work history and can help with opening a bank account or obtaining a mortgage.2 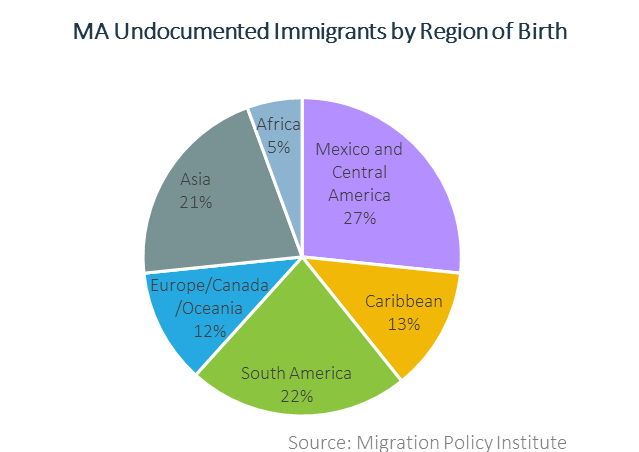 There are over 200,000 immigrants in Massachusetts 16 years of age or older whose immigration status prevents them from obtaining a Social Security Number and are therefore unable to access important tax benefits available to most workers. About 1 in 25 workers in Massachusetts is an immigrant without status. These workers provide the backbone for many industries essential to our economy, as immigrants without legal status are concentrated in such essential industries as food services, health care, and construction. Many undocumented immigrants face racism and discrimination in the U.S. because the large majority come from Latin America, Asia, the Caribbean, or Africa.  Two-thirds have been in the U.S. for at least five years, and a disproportionate number are frontline essential workers.3

Why is the EITC so important and how are some immigrant residents excluded?

The Earned Income Tax Credit (EITC) is a key program for reducing poverty in the United States. Together with the federal Child Tax Credit, these low-income federal credits lifted 7.5 million households above the poverty line in 2019, more than any other program except Social Security.4  In Massachusetts, the EITC provides support to more than 375,000 households filing income taxes across virtually every city and town.

Because the EITC is refundable, those who owe little or no income tax receive a check for any remaining amount of their credit. The amount of the credit ramps up for very low income tax filers as they earn more and then ramps down, as a taxpayer’s income grows, at different rates for different family sizes, phasing out completely at about $57,000 for the largest family types. Families often report they use the credit to pay off debt, make deferred repairs to their home or vehicle, or simply to supplement their regular earnings and meet basic needs.

Massachusetts provides its own state EITC, helping families to make ends meet by matching 30 percent of the federal credit. The average state credit in 2019 was $637. The maximum credit for tax year 2020 ranged from $161 for a single filer to $1,998 for a filer with three or more qualifying children.

A large body of research has shown that, in addition to income support, families who receive the EITC have better health and educational outcomes than people in similar circumstances who did not receive the EITC.5 For instance, children in families that receive the EITC tend to be born with healthier birthweights and are more likely to graduate high school and attend college.

Direct income supports like the EITC have become more important in the face of COVID-19. Many families’ incomes have been interrupted, especially in Black and Latinx households who have suffered the most job loss and also been hit hard by infections. Along with low-income tax credits, enhanced unemployment benefits and federal stimulus checks have been crucial lifelines that have helped families get by.6

Many low-income immigrants are excluded from the EITC

Over a quarter of undocumented immigrants in Massachusetts live with at least one child who is a U.S. citizen.8 If even one member of a family lists an ITIN rather than a Social Security Number, the whole family is ineligible for the EITC. They are excluded even if an immigrant has been working in Massachusetts for many years, contributing to the economy, and paying income taxes with an ITIN.

Massachusetts EITC should follow other states in fixing these EITC exclusions

Because typically not all eligible households actually apply for the EITC, if the Commonwealth extended the EITC to ITIN filers, an estimated 13,200 households would benefit from the credit. For the Massachusetts state budget, the cost of extending the credit would be about $9.3 million.9

States are not required to limit their own state EITC only to taxpayers with Social Security Numbers. California, Colorado, Maryland, and New Mexico recently enacted laws to extend their state EITC to tax filers who use an ITIN, thereby including all resident taxpayers regardless of immigration status. Washington State created a new credit that mirrors the EITC and extends to ITIN filers.

These policies are part of an immigrant-inclusive trend among states and cities that recognize how recovery from the pandemic must extend to all residents, regardless of their immigration status. Most recently, New York State created a $2.1 billion fund to provide undocumented familiess with more or less the value of the stimulus checks and unemployment benefit they were excluded from at the federal level. New Mexico similarly created a program to send $465 stimulus checks to those who had been excluded from the federal checks, including immigrants without status. Meanwhile, Oregon, Washington State, and California established relief funds for ITIN filers and other undocumented immigrants.

Policymakers in Massachusetts should follow other states in extending our state EITC to tax filers who use an ITIN. Doing so would be a small but important step toward ensuring an equitable post-pandemic recovery.

1 According to the National Immigration Law Center (NILC), “Taxpayers who file their tax return with an ITIN include undocumented immigrants and their dependents as well as some people who are lawfully present in the U.S., such as certain survivors of domestic violence, Cuban and Haitian entrants, student visa–holders, and certain spouses and children of individuals with employment visas.”

4 More than half of these individuals are children. See U.S. Census, Current Population Reports, “The Supplemental Poverty Measure: 2019” (Sept. 2020), Appendix Table 7 at https://www.census.gov/content/dam/Census/library/publications/2020/demo/p60-272.pdf.

5 MassBudget, “A Credit to Health: The Health Effects of the Earned Income Tax Credit” (2018).

6 Center on Poverty and Social Policy, “Stimulus checks, unemployment benefits, and SNAP kept 13 million out of poverty in January” (March 2021) at https://www.povertycenter.columbia.edu/news-internal/2021/forecasting-monthly-poverty-jan

7 Counts based on Institute on Taxation and Economic Policy analysis of unadjusted 2015 IRS data, with amounts expressed in 2020 dollars. See https://communitychange.org/resource/itin-eitc-fact-sheet/.