With “Millionaire Tax,” Massachusetts’ Top Tax Rate Would Compare Well to Top Rates in Other States

Why do we need new tax revenue in Massachusetts?

In order to build an economically and racially just Commonwealth, it is necessary for our state government to collect enough revenue to pay for key investments – ones that will create new opportunities for all our people and allow every community to thrive. These include investments in our transportation and education systems, two of the essential building blocks for individual, community, and statewide economic success.

For example, Massachusetts has a large backlog of repairs we need to make to our roads, public transit systems and schools – problems that will only get worse if we don’t tackle them now. Likewise, investments in affordable childcare,  well-resourced K-12 schools, and opportunities for debt-free vocational and higher education will propel our people and our communities forward.

When making these investments, it is especially important that the Commonwealth prioritize the needs of Black, brown and Latinx communities. Due to a centuries-long history of systemic racism, these groups have much lower average household incomes and continue to be excluded from many economic opportunities. This is an injustice we can and must correct.

Why raise the new revenue from very high-income filers?

As a matter of fairness and economic commonsense, it is important that the much-needed new revenue come from our state’s highest-income households – the same group that has gotten even richer during the pandemic and  which also is disproportionately white. With Massachusetts’s upside down tax system, these households currently pay a far smaller share of their income in state and local taxes than low- and middle-income households do. Applying a higher tax rate to very high incomes would help turn our tax system right side up, while advancing efforts to achieve racial equity in Massachusetts. The targeted, sustained investments made possible with the resulting revenue would have a still larger impact on economic and racial equity throughout the Commonwealth.

How much would the “millionaire tax” raise and how would it work?

One high-income tax option now on the table — dubbed the “Fair Share Amendment” — would generate at least $2 billion a year in new, ongoing revenue. If approved by voters in November of 2022, Fair Share would place an additional 4 percent tax on the portion of a filer’s personal income above $1 million a year. Income below $1 million would continue to be taxed at the 5 percent rate currently applied to all income in Massachusetts. The result would be a top marginal tax rate in Massachusetts of 9 percent (our 5 percent standard income tax rate + the 4 percent surtax).

The answer is no. While investments funded with Fair Share revenue clearly would benefit communities throughout the Commonwealth, a top rate of 9 percent would compare well with top rates in other states. Nine other states and D.C. already tax high-income filers at top rates very near to or above 9 percent. In several of these states – including Arizona, New York and New Jersey – the top rates shown in the chart below were adopted in just the last few years, in response to statewide, grassroots campaigns. Meanwhile, also in response to a grassroots campaign, the D.C. City Council recently approved raising the top rate to 10.75 percent on income above $1 million beginning in Tax Year 2022. 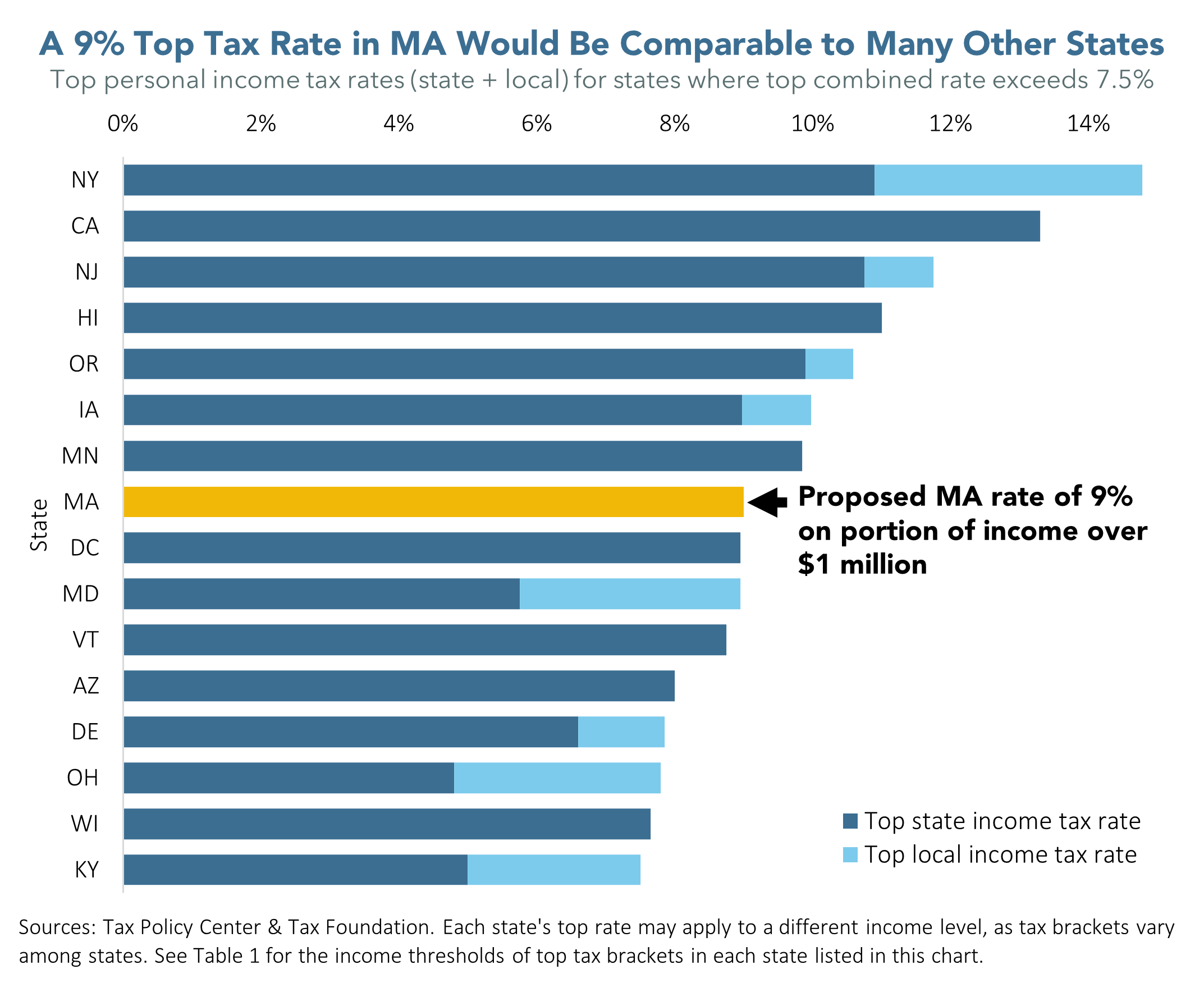 Notably, many states apply their top rates at income levels far below $1 million (see Table 1, below). As a result, a larger share of the income of high-income filers in these states is subject to the state’s top rate. With Fair Share in place, Massachusetts filers would pay the 4 percent surtax only on the portion of their income above $1 million. Income below $1 million per year would continue to be taxed at the current, 5 percent rate.

It is worth noting that a number of the states with the highest tax rates (for example, California, New York, and New Jersey) are among the group of states with the highest number and highest share of households reporting million-plus dollar incomes. For people familiar with research on the myth of “millionaire tax flight,” this is not surprising.

The most thorough academic studies show that, overwhelmingly, people with million dollar and higher incomes remain in the places where they have found such remarkable economic success – and where they have built the professional and social networks that help sustain their very high incomes. Higher state and local tax rates factor little into the decisions of most millionaires about where to live. Which, again, is not surprising – after all, one of the prime benefits of having a very high income is being able to afford a very high quality of life, in whichever place you have chosen to build your career and raise your family.

If approved by the voters in November of 2022, the revenue from Fair Share will allow Massachusetts to make sustained, transformative investments of more than $2 billion a year in education and transportation throughout the state. The way Fair Share is structured – impacting only those filers with very high incomes – likewise will help move the Commonwealth toward greater tax and racial justice.

The COVID-19 pandemic has created both a health and economic emergencies in Massachusetts. To help address these crises, the bill just signed by the Governor—referred …

To the Joint Committee on Revenue December 14, 2021 RE: Testimony in support of An Act Relevant to the Repeal of the Sales Tax Exemption …