What is the state budget?

The state budget is single largest piece of legislation passed each year. It affects every person in the Commonwealth. It also represents the values and vision for what Massachusetts should be.

The budget is a piece of legislation that goes through a set of steps to become law according to a calendar. This is also called the state’s “operating budget.”

When the budget becomes a law, it states out how much money the state will raise and how the state will spend that money on a wide variety of programs, services, and initiatives over the course of the year.

The state’s budget calendar (called the “fiscal year”) goes from July 1 to June 30.

The state budget process starts more than six months before the beginning of each fiscal year.

Planning for the next fiscal year

Usually in the fall before the next fiscal year starts, every state agency submits a proposed budget for the upcoming year to the Governor.

The Governor’s Budget Bureau (in the Executive Office of Administration and Finance) holds public meetings (called “hearings”) to hear about the budget needs from agency officials and from the public.

Usually in December, Chairs of the Senate and House Committees on Ways and Means bring together economists and policy experts to help estimate how much money there will be to spend in the upcoming state budget.

The economists and experts consider how well the state’s economy is doing, and look at past trends in how much the state has collected in income taxes, sales taxes, business taxes, lottery sales, and more. All of these estimates together help state officials estimate how much money the state will have available (the “revenue”) to fund the state’s budget for the coming fiscal year.

This is called the Consensus Revenue Estimate.

The Governor and Legislature will all base their budget proposals on this shared consensus revenue estimate.

The state constitution requires that there be “balanced budget.” This means that the budget can’t propose spending more than the amount of money coming in from taxes, fees, etc. (the “revenue”).

If the Governor or Legislature will want to spend more money than what is agreed to in the Consensus Revenue Estimate, their budget proposal will have to include proposals for new revenue. 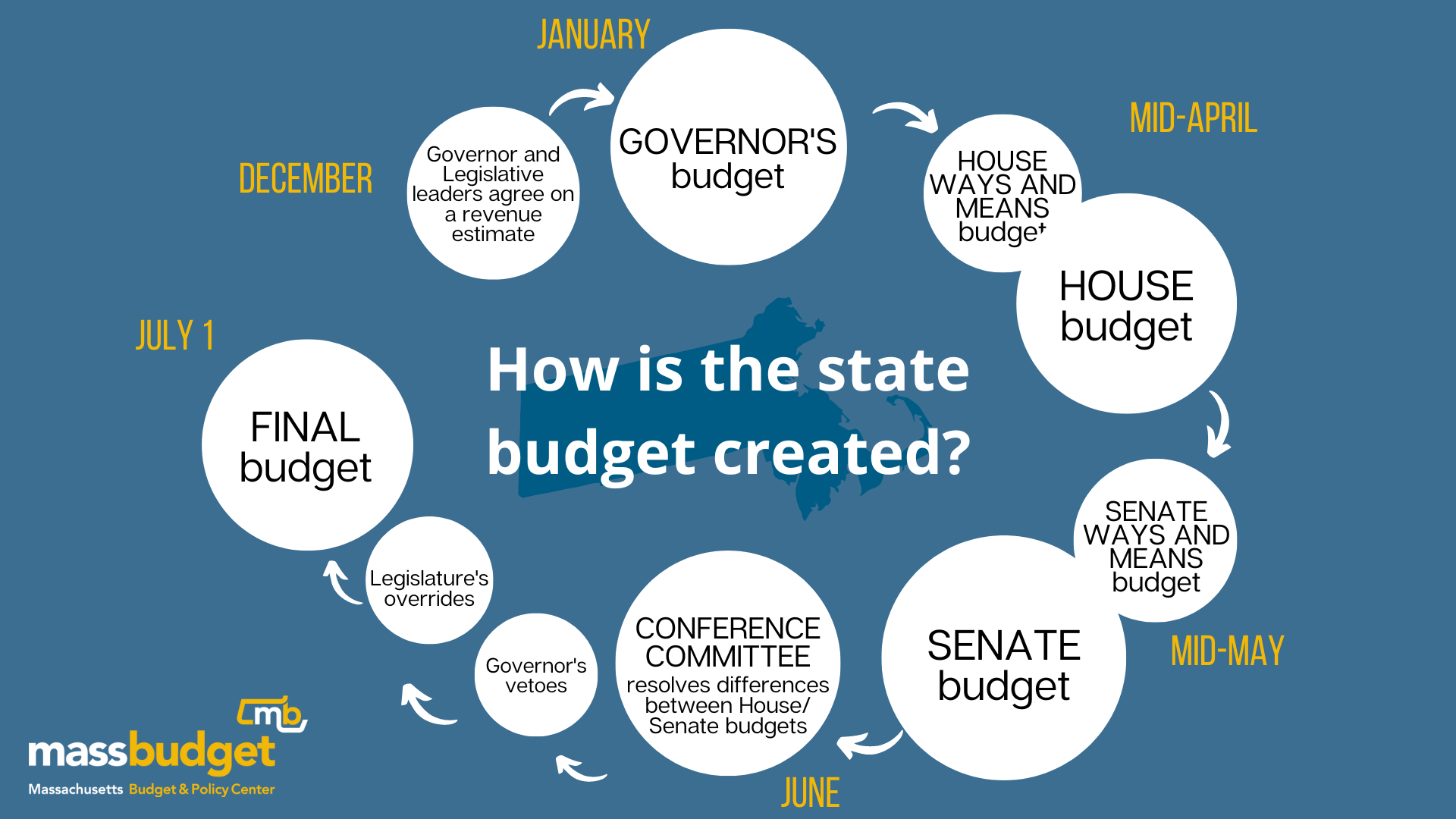 The Budget Bureau develops a proposed budget for the coming year, and presents it to the Governor. This budget includes proposals for spending and revenue.

This proposal can include new ideas for spending or spending cuts, and can also include new revenues such as taxes or fees, or cuts in taxes or reductions in fees. In either case, the budget must always balance. There must be enough projected revenue to pay for projected spending.

The Governor reviews and approves this budget proposal and releases it typically on the fourth Wednesday of January. The state constitution requires that the Governor propose a budget for the next fiscal year within three weeks after the Legislature convenes for the calendar year. In the case of a new governor in their first term, they are allowed up to eight weeks instead.

The budget documents lay out the Governor’s priorities and vision for the Commonwealth, and include information about the state’s fiscal health, a budget balance sheet, and all the proposed budgeted spending (“line item appropriations”).

Section 3 of the budget lists the amounts of local aid each city and town will receive and also the amounts for K-12 education (“Chapter 70”) for each municipal and regional school district.

Additional sections of the budget (“outside sections”) may include further legislative language or policy proposals.

With release of the operating budget the Governor also releases the fiscal year’s capital budget and the estimated amount of tax revenue that will be lost to tax breaks and tax credits (the “tax expenditure budget”).

The Governor’s budget is sent to the House Committee on Ways and Means.

The House Committee on Ways and Means (HW&M) holds public meetings to listen to people’s opinions about the Governor’s budget proposal.

Usually in mid-April, HW&M proposes its version of the budget.

The HW&M budget will have a new House bill number and will be sent to the full House for review and discussion. Members of the House can offer changes to the HW&M proposal (“amendments”) and debate the bill.

Once the full House decides and votes to approve its proposed budget, the House sends the bill to the House Committee on Bills in Third Reading for any needed technical corrections. The bill then receives a new House bill number.

This bill is passed by the House and put in its final form (“engrossed”). It is then sent to the Senate Committee on Ways and Means.

This usually happens before the end of April.

The Senate Committee on Ways and Means Committee (SW&M) holds public meetings to listen to people’s opinions about the House budget proposal.

Usually in late May, SW&M proposes its amended version of the budget. This version will have a new Senate bill number and will be sent to the full Senate for review and discussion. Members of the Senate can offer amendments and debate the bill.

Once the full Senate decides and votes to approve its proposed budget, the Senate sends the bill to the Senate Committee on Bills in Third Reading for any needed technical corrections. The bill then receives a new Senate bill number.

This bill is passed by the Senate and put in its final form (“engrossed”).

For every instance where there is a difference in language or a difference in proposed funding within the entire budget, the Conference Committee chooses either the House proposal or the Senate proposal.

The House and the Senate each vote to accept or reject the bill as proposed by the Conference Committee.

When the Conference Committee budget is accepted it is then sent to the Governor for signature.

The Governor has ten days to review the budget and either approve or veto it. The Governor may also veto or reduce specific line item appropriations, may veto outside sections, or may submit changes in the form of amendments to the budget for further consideration by the Legislature.

A 2/3 vote in both the House and the Senate can override a Governor’s veto.

The final budget is often called the “General Appropriations Act” (or “GAA”) for the upcoming fiscal year.