In Fiscal Year (FY) 2021 and FY 2022, the projected tax collections that set the level of the state budget were notably below the actual tax amounts the state collected over the course of those fiscal years. On top of that, a recent inflation spike has also increased costs for almost everything. A state budget that does not keep up with inflation can mean that there will be cuts to the benefits, services, and infrastructure people count on. An inadequate state budget risks leaving hundreds of thousands of residents out of a recovery.

The impacts of the pandemic are still being felt by many. Tens of thousands state they are at risk of eviction now and thousands more could face eviction as federal rental support expires. Nearly one in three Massachusetts adults struggle to find enough to eat. Thousands of people in the Commonwealth with disabilities are unable to receive critical services because of a human services worker shortage. Even though tax revenues may be more than estimated, the state budget is not currently meeting the needs of its residents.

So then why all the talk about “coffers overflowing” and the state having a “deluge” of tax revenue? surplus”? What’s going on?

Recent tax estimates were low, in part due to the uncertainty created by COVID. Forecasting tax collections more than a year in advance is always going to be subject to some error, and the rapid onset of COVID and the economic shutdown and recession in March 2020 led to understandable caution in forecasting. Potentially anticipating the worst, recent tax collection forecasts have been underestimates. These estimates directed affected the scope of the state’s budget, as budgeted spending cannot exceed expected revenues. 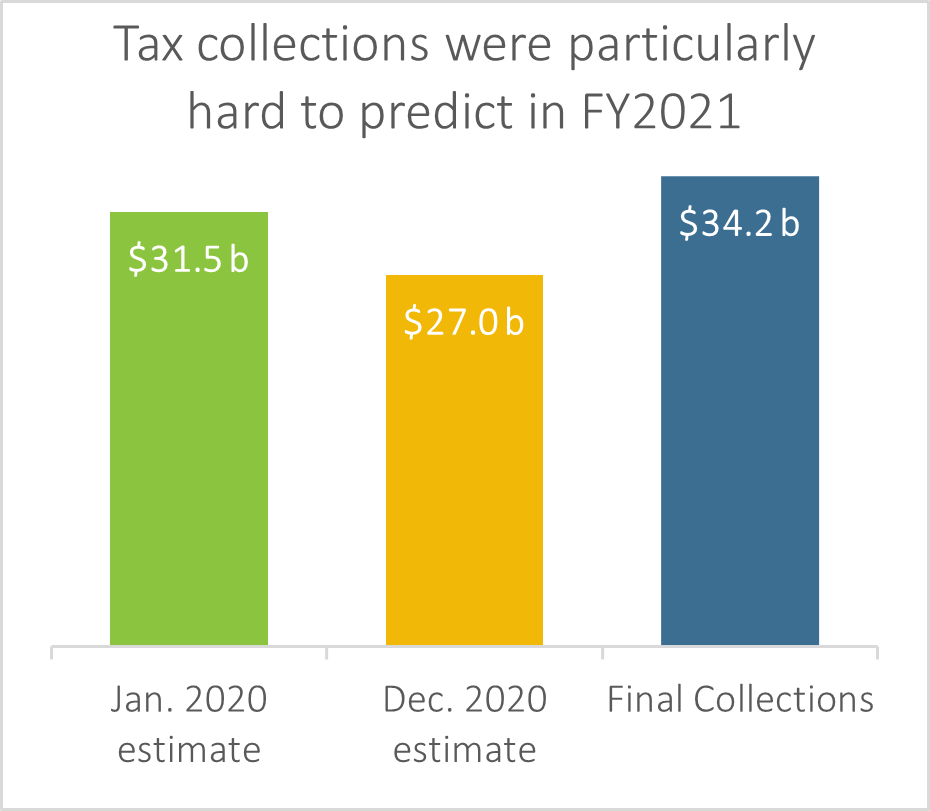 The FY 2021 tax estimate turned out to be very low. In January 2020 the Governor proposed a FY 2021 budget built on estimated taxes totaling $31.5 billion. This tax total was based on estimates made before most of us had ever even heard of COVID-19.

By spring 2020 when COVID and the economic shutdown looked like it might paralyze the economy, revenue estimators ratcheted down tax expectations. By the time the FY 2021 budget was finally enacted in December 2020, it was built on an estimate of $27.0 billion in tax collections, a reduction of $4.5 billion. However, by the end of FY 2021 actual final tax collections dramatically exceeded expectations and reached $34.2 billion. This is above even the estimate made prior to COVID.

The federal government came to the rescue which has temporarily boosted revenues in ways that were not predicted. The federal COVID relief legislation has brought more than $115 billion to the Commonwealth. This influx of federal dollars took many forms, from pandemic relief checks, supplements to unemployment benefits, enhanced child tax credits, PPP loans to businesses that became grants, financial relief for hospitals, and the like. These dollars kept the economy going. Federal relief spent by individuals, communities, businesses, and nonprofits, and by state or local governments supported the state’s economy and – not surprisingly – helped bump up state tax collections. 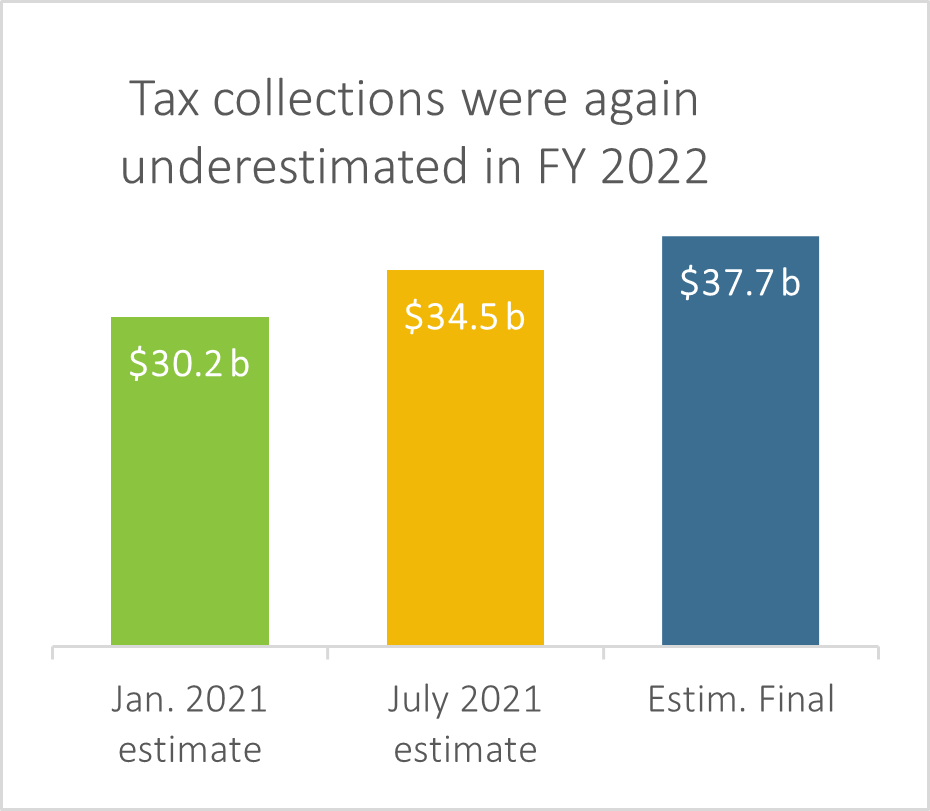 Forecasters were still cautious about a recession when it was time for FY 2022 estimates, yet it turned out that the recession – though deep – was the shortest recorded. In large part thanks to the economic boost created by federal relief, employment rebounded and the stock market recovered. FY 2022 tax collections also look to exceed predictions by a wide margin.

The two consecutive years of significant tax underestimates have led to what is called the current “tax surplus.” Yet even before the pandemic, Massachusetts was not adequately funding the Commonwealth’s needs in education, transportation, human services, health care, housing and more. Then when the pandemic hit, pre-existing social and economic inequities meant that lower-income families and households of color suffered disproportionately from its effects.

These unobligated (“surplus”) dollars provide policymakers with an opportunity to address important unmet needs that were not fulfilled by budgets created at the start of a fiscal year.

That being said, there are always business cycles, and tax collections will falter when the next recession hits. Some people might forget that the economy regularly contracts as well as expands. Since the Great Recession of 2009, the U.S. has seen a long economic expansion, interrupted in 2020 by the brief and deep recession created by the pandemic. Tax revenues follow the ups and downs of the economy, dropping during recessions (contractions) and growing during expansions.

Permanent tax cuts would hit the state hard when the inevitable recession comes, cutting revenue just when the needs of the Commonwealth would be greatest.

What does this mean for current tax debates?

Policymakers have three choices. Invest the current unobligated dollars in areas of the state budget and in communities where important needs are still unmet. Make thoughtful changes to tax policy to support low-income residents who have been left behind during the pandemic. Or give these dollars to the people who need this money the least with tax cuts for the state’s wealthiest and highest-income residents.

Permanent tax cuts for high-income residents from a temporary surplus would be risky, unwise, and unjust. And it would not help prepare for the next recession which will certainly come, but no one can know for sure when.

Read More →
PrevOptions to Adjust the Estate Tax While Retaining Revenue and Progressivity
Child care is in crisis. Here’s what’s being done about it – WBURNext