The tax on inherited estates is Massachusetts’ only tax that directly reduces wealth inequality. Although the pandemic has highlighted disparities between rich and poor families, the Governor and some in the Legislature have proposed changes to the estate tax that would largely benefit the state’s wealthiest households. These changes would double the current no-tax threshold from $1 million to $2 million, and for larger estates would subtract $2 million from the amount subject to taxation before applying tax rates.

Lawmakers often talk about changes to the estate tax as an attempt to help beneficiaries of smaller taxable estates. But the approach favored by the Governor, which many lawmakers seem to support, would provide the biggest tax breaks to the largest estates. A $12 million estate would receive a tax benefit of $320,000 – more than three times the benefit provided to a $2 million estate.

It doesn’t have to work this way. If lawmakers want to reduce taxes on the intergenerational transfer of wealth up to $2 million, there are simple alternatives that would do so without providing even bigger benefits to the wealthiest of the state’s wealthiest households. These alternatives would also retain more state revenue that could be spent on other public priorities.

A quick look at how the estate tax works makes it clear why the biggest estates receive the biggest benefit from the Governor’s current proposal.

The estate tax is a graduated tax. It applies lower rates on the first taxable dollars and then applies increasingly higher marginal rates to increasingly larger estates. The tax rates max out at 16 percent on the amount of any estate over $10 million. The Governor’s proposal – which many lawmakers are also mulling over – would exclude $2 million from taxes off the top end of the estate. This means that there is $2 million less subject to the higher brackets. This is a tax benefit worth far more to larger estates.

A simple alternative would exempt the first $2 million from estate taxes, but then apply the same marginal tax rates as at present to additional amounts of estate. Estates larger than $2 million would receive the same amount in a tax cut as a $2 million estate (see chart).

An even simpler alternative would be to only increase the no-tax threshold to $2 million. Estates below $2 million would pay no tax, and estates above that mark would pay the same as they do today. There would be a large tax difference for estates just above and below the no-tax threshold, which might motivate some people with estates near the threshold to make charitable contributions to ensure their estate is valued below $2 million. 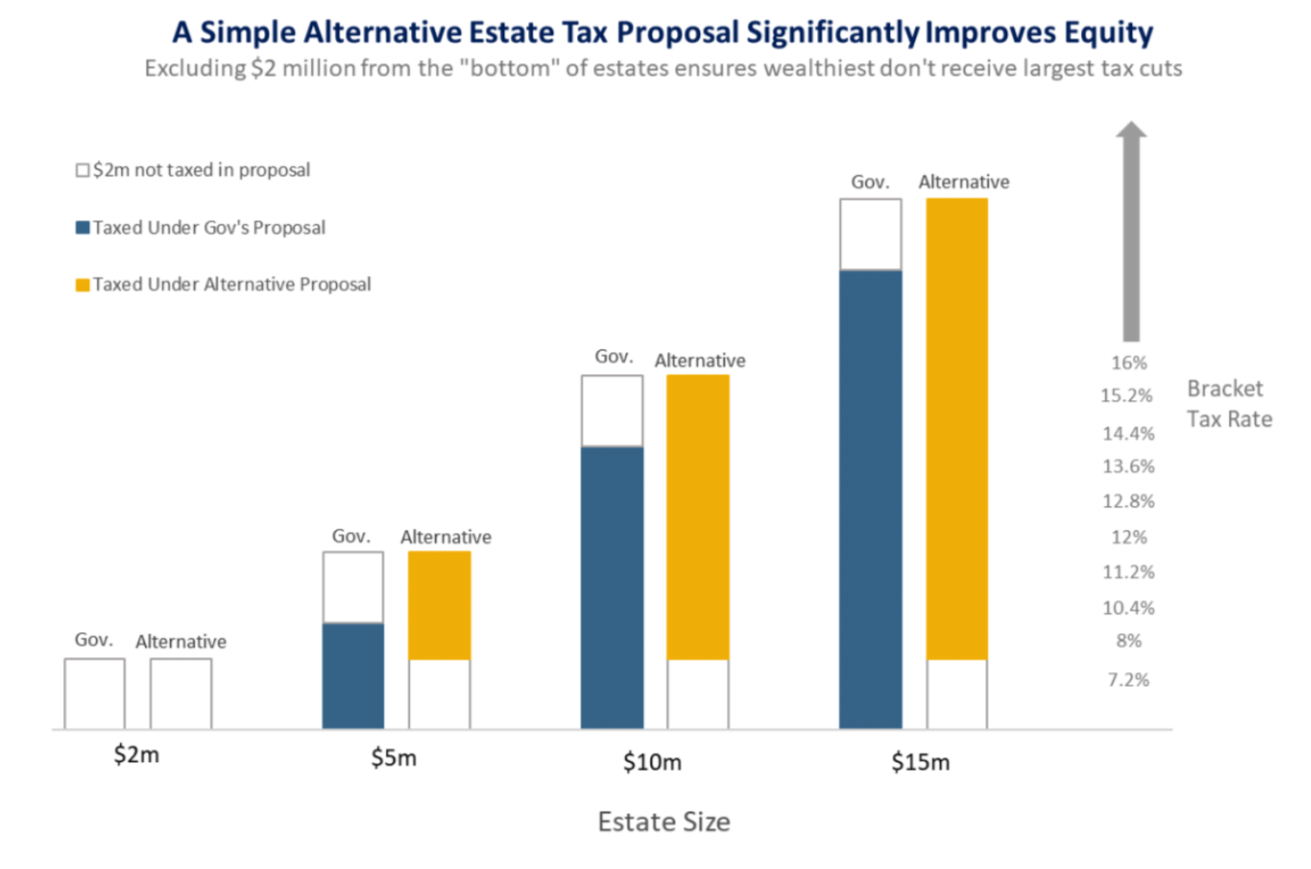 Moreover, if lawmakers seek to target tax relief to estates mainly consisting of a high-value home, they could target their additional $1 million tax cut to apply only to a person’s primary residence or only by the same percentage that the home is of the estate. If these are the people that lawmakers are trying to help, they can design their policies to match those goals.

We are seeking a dynamic and highly organized Director of Development who is aligned with MassBudget’s mission of advancing equitable policy solutions that create an inclusive, thriving Commonwealth for all.

The passage of Questions 1 and 4 are powerful steps in the right direction for our communities, and the work continues.