Prospects for Investment, Stability, and Growth in Early Education in Massachusetts

This report was completed before today’s announcement of the FY 2023 Conference Committee budget – we will analyze that and provide updated context as soon as we can.

As the challenges of the COVID pandemic continue to reverberate across the state, early education and care (EEC) providers persevere every day. Early care centers across the Commonwealth continue to deliver enriching support for young children while allowing parents to work and provide for their families. EEC has an essential role in keeping our state economy moving during these challenging times.

The COVID pandemic has been a period of upheaval for EEC providers, teachers, families, and young children. The experience has also underscored the key role of early care in our state economy. Even before the pandemic, the EEC field, which is staffed nearly entirely by women and many people of color, faced chronically low pay for educators, high turnover, limited state investment, and scarce affordable options for families. COVID exacerbated these issues while presenting new challenges such as program closures, unstable enrollment, increased operating costs, and the direct threats of virus cases to teachers and kids, particularly those who until recently, were ineligible for vaccination.

Early care programs have received significant new funding throughout the pandemic, including most notably $730 million in largely one-time federal relief funds since 2020. Even with this new, one-time support, EEC providers across Massachusetts remain in a precarious situation this year due to the disruptions of the pandemic and the resulting difficulties in keeping classrooms open as centers struggle to provide the salaries and benefits necessary to retain EEC teachers.

The COVID crisis also highlighted the harms to the wider Massachusetts economy that result when families lack reliable and affordable child care. A recent Massachusetts Taxpayers Foundation analysis estimated that the losses to our economy from unstable child care tally to $2.7 billion each year, due to lower wages, productivity, and state revenue when families lack stable care.

The COVID pandemic also created new complexities for public funding that supports EEC in Massachusetts. The just-concluded Fiscal Year (FY) 2022 budget provided $952 million for early education and care, a dramatic 37% increase compared to FY 2019, before the onset of the pandemic.

The true picture of EEC funding, however, is significantly more complicated than a simple tally of line item funding in the state budget. According to the Department of Early Education and Care $100 million in unspent funds (“operational reserves”) from FY 2021 (likely driven by COVID-related drops in enrollment) were able to be used in FY 2022 to increase payments to providers, support the EEC workforce, and implement COVID safety measures. These dollars carried over from FY 2021 would not be included in the $952 million FY 2022 line item total.

The FY 2022 budget did include $131 million from federal relief grants from the Coronavirus Response and Relief Supplemental Appropriations Act (CRRSA) intended to be used broadly where needed across our EEC system.1

The most recent federal COVID relief law, the American Rescue Plan Act (ARPA), which passed in early 2021, has also been a critical source of funding in FY 2022, most notably $314 million in child care stabilization funding. These dollars were what is known as “off-budget” as they were to be distributed directly to providers, so did not show up in the FY 2022 budget totals.

The Department of Early Education and Care recently indicated it has combined these two federal grants from CRRSA and ARPA to implement the Commonwealth Cares for Children (C3) stabilization grants. C3 has been a critical source of revenue for early education providers across Massachusetts over the past year. According to the Department of Early Education and Care, roughly 6,600 programs serving 160,000 children received C3 grant funding in FY 2022. This includes providers who had not historically received state funding, but who critically need this support in the COVID era. This data also suggests that C3 grants are being used as intended for ongoing provider operating costs, including payroll, making up for revenue losses during the pandemic, and other important objectives.

Looking holistically at the FY 2022 EEC budget, between the key traditional line items and several new sources of support, including those outside of the typical budget process, the complete figure for statewide early education funding was roughly $1.4 billion (see chart below). In addition to the $952 million in the budget, roughly $414 million in other state and federal funds was distributed to early care providers across the state in FY 2022. 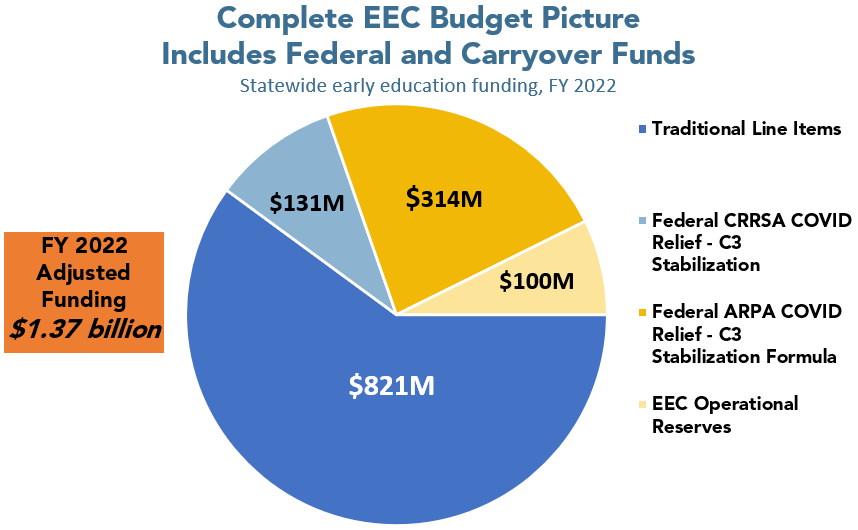 Some budget complexities of the past year will carry forward into FY 2023. The legislative Conference Committee currently finalizing the FY 2023 budget will soon produce a full blueprint for this year. Overall, the Senate proposed $1.13 billion in total early education support, compared to $912 million proposed by the House. Working out the differences will help determine whether early education funds can match the prior year and continue to stabilize EEC providers across the state.

The House and Senate budgets have a total of $345 million in discrepancies. The two most consequential are $250 million provided in the Senate plan to continue C3 stabilization grants (which received no funds in the House plan) and $35 million in greater funding for rates paid to subsidized providers in the House budget. C3 grants have temporarily expired, with no funding yet secured for this year unless and until a FY 2023 budget passes with funding for these grants. As it currently stands, providers and families are unsure of whether classrooms can stay open without this critical support.

The role of remaining federal ARPA funds in FY 2023 is also likely to be critical. According to the Baker Administration, $196 million in flexible ARPA early education grants could be released to support a stable financial footing for the EEC field. These grants could support key efforts like C3 and allow total statewide EEC funding to equal or exceed FY 2022 allocations. Finally, it is also possible that the Legislature could use surplus funds from FY 2022 (a reflection of overly pessimistic revenue projections) to shore up the EEC system before the end of the Legislative session. While these important details remain to be settled, providing as much EEC funding as possible (from all available sources) would best serve the EEC sector now and set the stage for longer-term plans to move our state towards universal, affordable, high-quality care for all young children and families. 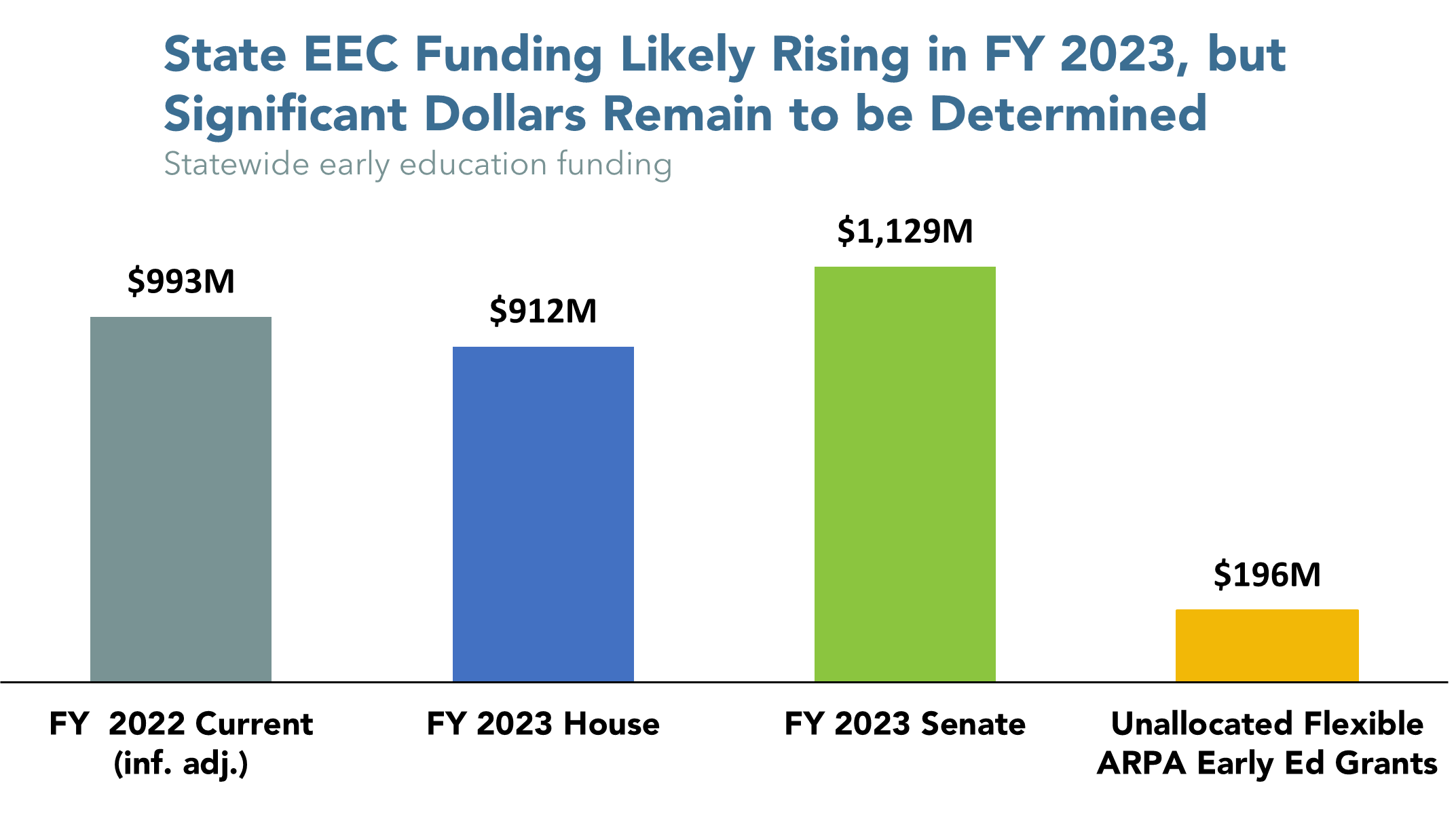 While significant budget issues for this year remain unsettled, there are also important longer-term concerns that may be addressed by the end of the legislative session this month. To address the many challenges in the EEC system and build towards a stronger future, the Legislature’s Joint Committee on Education introduced a broad EEC expansion bill in mid-May. Bill S2883, the “Act to Expand Access to High-Quality, Affordable Early Education and Care” (the Act), builds on proposals from key stakeholders such as the Common Start Coalition and a related EEC funding commission report from March 2022. That report provided recommendations while outlining the funding needed for critical parts of EEC expansion.

Achieving significant EEC legislation within mere months of a commission report would be remarkably fast. The Act importantly sets the goal that the state should officially define the cost of quality early care as part of the reform, which would be an improvement from the current practice of using data from the highly fraught existing child care market in our state. The Act also addresses straightforward regulatory changes that should improve the situation of EEC providers and families accessing care. This includes basing state subsidies on enrolled young children, not those who happen to attend on a particular day, allowing centers to offer discounts to EEC teachers for their own care to allow them to teach, making the process of applying for state subsidies more streamlined and have greater due process protections. There are also significant measures that could support the EEC workforce, such as scholarships, a loan forgiveness program, and revamped compensation guidelines for educators as they advance in their careers.

During the week of July 7th, the Senate passed an updated version of the legislation. The House would need to follow suit shortly and any differences handled quickly to allow the legislation to be enacted by the end of July.

Even if this moves ahead as intended this summer, the Commonwealth will still have important issues to clarify in the coming years. First, while the Act sets the objective of defining a cost of quality care, it doesn’t specify this funding level either broadly or for different age groups of children. It also does not yet establish a clear benchmark of affordability for families, such as using the widely adopted federal standard of 7% of total income. The specific choices of funding rates, affordability standards, and the thresholds of family income where these would apply, is necessary to ensure families are able to access and afford quality EEC and create an implementation roadmap for our state.

Finally, one aspect of the Act could potentially take our state out of the driver’s seat in advancing the goals of affordable, quality EEC. A portion of The Act specifically makes public support for care for middle class families dependent on whether the federal government takes further steps to expand EEC funding at the national level on top of the significant role it has traditionally played through existing child care efforts like block grants and Head Start.

Given the scale of the early care crisis across the country, it is fair to look to the federal government for greater support beyond traditional programs and the one-time COVID relief measures of the past several years. However, linking the provision of care for middle class families in our state to the highly uncertain prospect of new Congressional action in the next several years is a risky bet. For the moment, additional federal funding for child care expansion has stalled, leaving states on their own to pick up the slack. Given that situation, the Commonwealth should set its own objectives for EEC expansion and use any new federal support that emerges later to accelerate these plans.

Even with some components yet to be further improved, through the final deliberations this month or next year when the Legislature begins a new session, The Act to Expand High-Quality Early Education would be a remarkable start to the process of achieving high-quality, affordable, and universal care in Massachusetts.

Many details remain to be determined on both the immediate budget picture for this year and the long-term outlook for early education. While this moves forward, our state should both pass comprehensive legislation and ensure stable support for early education and care throughout this year as we pursue the policies necessary for our EEC system to truly become world class, meeting the needs of children, families, and our economy at large.