Based on new Department of Revenue data from tax year 2020 and the Auditor’s 2022 62F report, households making $1 million or more could receive a 62F credit of over $28,000. These data also document the equity implications of the 62F credit distribution formula, as nearly 53% of tax filers with incomes under $25,000 will not receive a 62F credit.

The “tax cap law,” or what is known as “62F,”1 sets an artificial limit on how much tax revenue Massachusetts can collect, regardless of the current needs of the Commonwealth. This law in effect transfers to higher income households tax revenue paid by lower income households. This is because non-income taxes like the sales tax and gas tax make up a higher share of the taxes paid by lower income households, but the law gives tax credits back according to how much income tax was paid. The data presented below illustrate how this occurs under income tax credits that do nothing to improve racial or economic equity in our state.

Lower income households contribute significantly to the state’s total tax revenue via sales, gas, and other non-income taxes, but the amount of the 62F tax credit is based only on the amount of income tax someone has paid. A low-income family that paid sales and gas taxes would not get a 62F credit if they earned so little they were at what is known as “no-tax status.” Moreover, low-income families might not receive a 62F credit if low-income credits like the Earned Income Tax Credit or dependent tax credits reduce the income tax they owe to $0.

Analysis of Department of Revenue (DOR) data4 show how the 62F tax credits are regressive, meaning that the credit will disproportionately benefit higher income households. Table 1 is an illustration of how 62F credits would work using 2018 DOR tax data (the latest available) and assuming a 13 percent excess revenue percentage.

The difference in the size of the credits is substantial. Households in the bottom 20% of the income distribution would get a $9 credit under 62F. Households in the top 0.57% of the income distribution, with incomes starting at $1 million and which have an average income of $3,668,941, would receive a 62F credit of more than $22,000. We are giving millionaires the equivalent of a Rolex or more than a semester at UMass!5 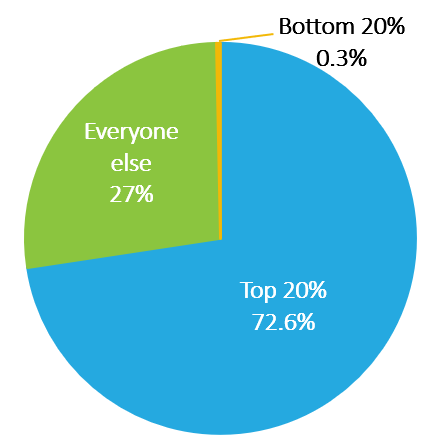 Regulatory language for 62F is available at the following website at the time of publication: https://www.mass.gov/doc/830-cmr-62f-limitation-on-the-growth-of-state-tax-revenue/download

830 CMR 62F6.1(6): “Determining the Excess Revenue Percentage to be Used in Calculating the Excess Revenue Credit. Each year in which the State Auditor determines that excess state tax revenues exist to be credited to the taxpayers, the Department will announce the excess revenue percentage for taxpayers to use in calculating their excess revenue credits for the current taxable year. The Department will derive this percentage by dividing the excess state tax revenues determined by the State Auditor by the estimated total personal income tax revenues received by the state in the current calendar year in payment of personal income tax liabilities incurred for the previous taxable year.”