The Myth of the One-Year Middle Class Millionaire

No matter how you slice it, an exceedingly small number of people would pay a proposed tax on the portion of annual income over $1 million – less than seven Massachusetts tax filers in a thousand would pay more if voters pass ballot Question 1 (Fair Share) to support education and transportation.

An examination of available data suggests that when a middle-class taxpayer sells their small business or home, they would be highly unlikely to have a taxable income over $1 million, the point at which additional income would be subject to the new tax.

“One-time” occurrences of $1 million income are relatively rare overall, and in fact much rarer for the middle-class. It is far more common for tax filers who exceed $1 million in annual income to do so year over year. This is what is referred to as “persistent millionaire income.” Even if not a persistent millionaire, those whose income crosses the $1 million threshold in only one year are also likely to have incomes in the top 1 percent during other years. The amount of capital gains from asset sales are not likely to be high enough to bring someone over the $1 million threshold unless they are very high income to begin with. Tax filers with income between $1 million to $1.5 million would likely still be in the top 1 percent without the income from those assets.

How common is it for tax filers to have income over $1 million and do so only once? The two studies which examine millions of tax filing records over many years demonstrate that one-time crossing of the million-dollar threshold is relatively rare.

The most comprehensive examination of million-dollar-plus incomes is a 2016 study undertaken by Stanford University professors Charles Varner and Cristobal Young with Ithai Lurie and Richard Prisinzano, financial economists at the U.S. Department of Treasury Office of Tax Analysis. They examined 45 million anonymized tax returns representing every federal personal income tax return over 13 years for all tax filers with an adjusted gross income over $1 million for any of those years. They noted, “one set of findings that stands out is the persistence of millionaire income over time” (italics in original). Only 15 percent of tax filers who reported income over $1 million at any point during this 13-year period could be described as “one-time millionaires.”1 In any given year the percent of filings over $1 million from these one-timers would be lower.

There is an older and much smaller study that examined fewer years and found a different result. The 2010 paper by researcher Robert Carroll, from a conservative think tank based its conclusions on a subsample of 62,000 anonymized Internal Revenue Service (IRS) tax filings from around the nation over nine years.3 That paper is chiefly focused on arguing that income inequality should not be a major concern. It concluded that approximately one half of million-dollar income filers are “one time.” It is unclear why the finding was so out of step with more comprehensive studies. But in any case, it is clear that the finding would not mean that half of those paying the Fair Share tax in a given year would be one-timers.4

The California study also examined the amount of income reported in other years for a tax filer who exceeded $1 million in at least one year. In the six years prior to million-dollar earnings, these tax filers had a median income of $740,000. During the six years afterwards, their income was $1,149,000.5 In other words, a typical million-dollar-plus income filer would typically also receive an average income in the top 1 percent during the dozen surrounding years.

The profile of somebody with an adjusted gross income over $1 million is far less likely to be a dentist or a florist making a one-time sale of a business or a home and far more likely be a corporate lawyer, hedge fund manager, CEO, or someone else with a persistently very high income. 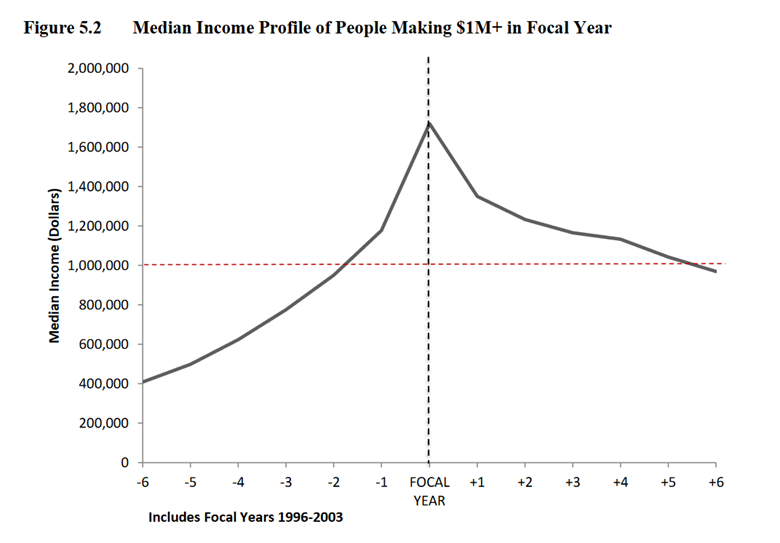 One reason extremely high incomes tend to be persistent is that households with the highest incomes tend to benefit from intergenerational wealth, privileges, and greater economic opportunities that reap returns year after year. High incomes also create their own advantages that make it easier to receive a very high income in other years.

Data provided by the IRS and other sources make it possible to further examine claims by some opponents of the “Fair Share” ballot question that middle-class earners could become “one-time millionaires” as the result of capital gains from selling their home or business. These claims can seem credible because people may confuse the price of a home or business with the taxable income from selling these assets. But as described below, the taxable income from an asset sale tends to be only a fraction of its sale price.

Among U.S. tax filers with income ranging between $1 million and $1.5 million who report capital gains from selling assets, these sales do not even comprise a majority of their taxable income. While income from the sale of assets such as a home or business averages $282,000 for this group, other sources of income such as salary and ongoing business profits represent 85 percent of their income, according to the most recent IRS data.  Without the income from asset sales, many tax filers in this group would still have incomes over $1 million. They wouldn’t, on average, have ordinary middle-class incomes.6  Sales of assets such as might occur from a small business or a home do not appear to be a major factor in the income of those with incomes a bit over $1 million.

Looking more specifically at home sales, capital gains apply to only to the amount exceeding the prior sale price. Sellers also can deduct the cost of improvements made to the property, the brokerage fees and other costs of selling the home, and an additional $500,000 on a primary residence ($250,000 for single filers). Taxable gains in a home’s value are also reset to zero when it is passed down to inheritors. With all these reductions, it is no wonder that very few home sales would push income over $1 million. In a majority of Massachusetts cities and towns, zero homes sold for a net gain of $1 million or more, even before the deductions.

The story is broadly similar for small businesses.  Only a small number of small businesses ever get sold; many – especially the majority that are sole proprietor businesses8 – simply shut down. Based on information about 1,400 sales of businesses in Massachusetts between 2017-2022, the median sales price over this period was about $290,000.9 There were sales over $1 million, but they were relatively rare. And the taxable income realized from such sales is far lower than the sales price. The seller can deduct the original investments they paid for the business, the cost of equipment, property, inventory, and as well as realtor and legal fees incurred from the sale. And the income is further divided if there are multiple owners or the sale was arranged in installments over multiple years.

America has long seen itself as a land of opportunity. It’s appealing to imagine that everyone could be on the brink of making over a million dollars some year in the not-too-distant future. Soaring briefly to such income heights, however, is exceedingly rare. The notion of middle-class earners becoming “one-time millionaires” as they sell their businesses or homes is far more myth than reality.

4 By analogy, half of all the people who ride on the MBTA at some point during the year might be tourists. But that would not mean that half of MBTA boardings are tourists.

5 The income profile analysis focused on the eight years during 1996 to 2003 plus the six years prior and six years following. Page 33.

6 The average adjusted gross income for this income range is $1.202 million. Among all tax filers in this income range, regardless of whether they reported taxable net gains from asset sales, the average amount of those gains is $180,000. IRS, Individual Tax Returns Filed and Sources of Income (2019).

7 Based on a special IRS data series published in 2016. Statistics of Income – Sales of Capital Assets Reported on Individual Tax Returns.  Download at https://www.irs.gov/pub/irs-soi/1201insoca.xls. Out of 844 billion in capital gains, only $5 billion came from sale of a primary residence.

8 According to the SBA Massachusetts 2022 Small Business Economic Profile, there are 718,467 small businesses, 576,528 of which have no employees (4 out of 5). Note that the SBA includes in their definition of small businesses as those with up to 499 employees. Most people do not think of such enterprises with that many employees as “small”.