Many people are familiar with the state’s operating budget. That $50 billion dollar policy tool funds our classrooms and teachers, our nursing homes and mental health services, our judiciary, and our rental assistance programs. But to build and renovate our school buildings, nursing homes, public health facilities, public housing, roads, courthouses, and parks, the state has a separate capital budget. The capital budget is designed to pay over time for long-term investments and long-lasting assets, without having to rely on the single-year operating budget cycle.

Capital budgeting allows for the multi-year timeframes needed to plan, construct, and finance assets that may last for decades. But if the state’s capital budget is inadequate to meet the capital needs of the Commonwealth, the state is at risk of sacrificing its investments. Schools might become run-down or overcrowded, public housing might become dilapidated and unsafe to live in, the state’s technology might become outdated and obsolete.

Unlike the operating budget which is paid for by annual revenues such as taxes, fees, and federal reimbursements, the capital budget is paid for by longer-term financing mechanisms such as bonds. A bond is a type of “IOU” and is the primary funding source – but not the only source – of funding for capital spending.1 The state sells a bond, and the bond’s buyer is essentially loaning the state money. The state then uses the proceeds from that sale to finance the purchase or construction or maintenance of a capital asset. The state then pays back the borrower over the life of the bond, along with interest on the loan. The loan repayments and the interest are referred to as “debt service.” Debt service payments for bonds are paid out of the state’s annual operating budget.2

The state sells general obligation bonds that pledge the “full faith and credit” of the Commonwealth against the state’s general ability to levy taxes and other revenues. Special obligation bonds pledge specific revenues available to the state, such as revenues raised from the state’s convention centers, or revenues raised by taxes on gas or other fuels and fees from the Registry of Motor Vehicles. Some capital spending is also paid for with specific federal funds or operating funds within the state budget.

Unlike with the operating budget, the state’s capital budgeting process does not include well-attended public hearings or public debates on funding priorities. (The Department of Transportation, unlike the other capital agencies, has its own separately established capital plan and a planning cycle that includes a public comment period as part of its process.) For the state’s overall capital plan, there is little opportunity for the public to participate in the process of developing priorities for capital spending or for influencing which project happens when. And even more challenging, when a law is passed authorizing capital spending, there’s no guarantee that the money authorized will ever be spent on the projects listed in the authorizing legislation. On top of that, the capital budget is much smaller than the operating budget – about one-tenth the size.

Voting on and passing bond bills is the Legislature’s primary direct role in capital budgeting. A bond bill is legislation that authorizes the state (technically, the Treasurer) to issue and sell bonds to fund capital projects and programs. Usually the Governor introduces bond bills, although legislators and executive agencies can as well.

Bond bills are reviewed by the Joint Committee on Bonding, Capital Expenditures and State Assets.8 Once approved by the Committee, the bond bill must also pass through the Committees on Ways and Means prior to passage by the full House and Senate. A bond bill must pass by a two-thirds majority roll call vote in both the House and the Senate.9

A bond bill can include language (similar to a legislative earmark) for a capital spending authorization. This identifies a specific program or project that could be authorized for funding within this bond bill.10

The Governor ultimately has control over capital spending but must choose from among the items authorized within enacted bonding legislation. For this reason, the Governor will often propose a bond bill with relatively unrestricted language to maintain discretion over what capital projects will move forward.

The Governor typically has five years in which to fund projects authorized in a bond bill.11 Each year, the state may enact legislation to extend the term of unused capital spending authorizations that are due to expire.12

Bond bills often focus on distinct areas of investment, such as transportation, housing, or economic development, although in many years there is a bond bill that focuses on a variety of state capital projects across multiple agencies.13 Bonding legislation often follows a cycle. For example, the Legislature authorizes a major housing bond bill approximately every five years14 and the Governor may then spend some portion of the funding authorized each year.

A bond bill simply authorizes spending – it does not guarantee that the capital projects identified in the legislation will come to light. That decision reverts to the Administration when the Governor determines what will be funded in the detailed list of projects included in the first fiscal year of the five-year capital investment plan. 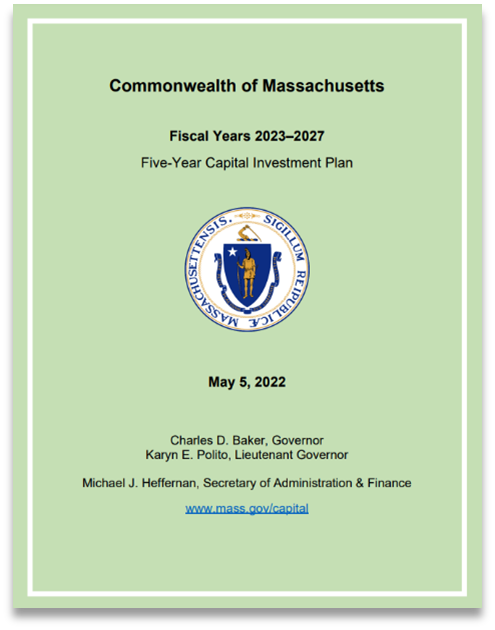 Every year, the Governor releases a five-year capital investment plan (CIP). This is a planning and fiscal management tool that lays out proposed capital investments, as well as the five-year plan for financing. The Governor must release this plan before the start of the fiscal year on July 1.15 The plan is updated on a rolling basis.

This plan creates the schedule for the state’s investments in its capital assets and identifies the sources of funding for those assets. Capital assets – by definition – have a useful life of over one year.16 The costs of paying for capital assets can then be spread over more than one year. The largest component of capital spending every year is for transportation, along with funding for public facilities, housing and economic development projects, and capital spending related to energy and the environment. Together, these represent most of the state’s capital spending through the sale of general obligation bonds, which are subject to a “bond cap” (see below.)

Seven of the ten largest items in the Governor’s capital budget for FY 2023 are for transportation projects, ranging from $429 million for highway and bridge construction to $94 million for MBTA subway vehicles. At the other end of the spectrum, the FY 2023 capital budget itemizes $10,000 in spending on a state hospital and $20,000 for various construction projects at state universities. The total list includes more than 400 separate capital projects.18

And while the demands of transportation funding typically dominate the annual capital budget, the state’s Division of Capital Asset Management and Maintenance (DCAMM) plays an important role as the state’s primary capital planning agency. In addition to capital planning, DCAMM oversees major public construction and facilities management. DCAMM also oversees the state’s capital assets and works with the other capital planning agencies (such as the Department of Transportation or the Executive Office of Health and Human Services) to support their needs. In the FY 2023 capital budget, 130 of the 430 items funded are under the oversight of DCAMM.

There are limits placed on capital spending in part because the Commonwealth wants to make sure that the debt service needed to support this spending stays at a manageable level. To handle this, the state has put into place three primary measures: creation of a Capital Debt Affordability Committee to provide guidance and oversight; creating a bond cap; and establishing a direct debt limit.

In 2012, the Legislature created the Capital Debt Affordability Committee to recommend to the Governor the total amount of new debt that should be authorized for the following fiscal year.19 In addition to considering the administrative bond cap (see below) and the statutory direct debt limit (see below), the Committee has also tried to limit total debt service payments to less than eight percent of the state’s budgeted revenues through the coming decade.

The Capital Debt Affordability Committee considers such factors as the amount of state bonds that will be outstanding in the next fiscal year and the amount of capital spending that has been authorized but still unissued (see below). They consider the Governor’s Capital Investment Plan and projection of debt service requirements over the next decade. They also consider various economic factors and other considerations that would be important for the credit rating agencies.

Chapter 140 of the Acts of 2022 gave two additional responsibilities to the Committee. Language in the legislation states that no later than July 15, 2023, the Committee should report to the Governor on measures to reduce overall debt service being paid by the Commonwealth and measures to increase the state’s bond ratings.21

The state’s bond cap is an administrative limit on the amount of bond-funded capital expenditures each year. The bond cap consists of the annual total of Commonwealth general obligation bonds sold. This is a policy intended to keep the Commonwealth’s debt within reasonable and affordable limits.

A statute sets a ceiling on how much total direct debt (the principal from general obligation bonds) the Commonwealth may have outstanding at any point. This amount was set at $17.070 billion in FY 2012 and is allowed to increase by five percent every year thereafter.23

The state aims to stay well within this limit to maintain in good standing with creditors. In FY 2022 the state’s direct debt limit was $27.805 billion, but total outstanding direct debt was 86 percent of that, $23.878 billion.24

The Commonwealth typically authorizes (through bond bills) more debt than it ultimately uses to finance capital projects. This is referred to as “authorized and unissued debt.” The Comptroller estimates that in FY 2022 there was approximately $38.2 billion in authorized but as yet unissued debt.25

1 In addition to general obligation and special obligation bonds, capital spending is also paid for with specific federal funds, fees, or operating funds within the state budget.

4 “The Capital Debt Affordability Committee was established by Chapter 165 of the Acts of 2012, Section 60B. On or before December 15 of each year, the Committee shall submit to the Governor and the General Court the Committee’s estimate of the total amount of new Commonwealth debt that prudently may be authorized for the next fiscal year. The Committee shall review on a continuing basis the size and condition of the Commonwealth tax supported debt as well as other debt of any authority of the Commonwealth. The estimate shall be made available electronically and prominently displayed on the official website of the commonwealth.” https://www.mass.gov/capital-debt-affordability-committee

10 House Committee on Bonding, Capital Expenditures and State Assets, “Report on Capital Spending & Borrowing in the Commonwealth of Massachusetts 2019-2020,” p.44.

12 House Committee on Bonding, Capital Expenditures and State Assets, “Report on Capital Spending & Borrowing in the Commonwealth of Massachusetts 2019-2020,” p.44.

16 House Committee on Bonding, Capital Expenditures and State Assets, “Report on Capital Spending & Borrowing in the Commonwealth of Massachusetts 2019-2020,” p.6.

24 These numbers are as of June 30, 2022 and are preliminary. Commonwealth of Massachusetts Preliminary Official Statement Dated October 11, 2022, p.A-83.