A strong economy is one that works for everyone – from our lowest wage earners to our highest. Unfortunately, changes in our economy have made it increasingly hard for working families to make ends meet. Specifically, since the early 1970’s, average wages have stopped growing as quickly as the overall economy. But this wasn’t always the case. As shown below, wages grew in lockstep with productivity growth from the late 1940s to the early 1970s. During this period, living standards and opportunity were expanded for millions of working households. But since 1973, average wages have largely stagnated even though the economy continued growing (for more detail, see State of Working Massachusetts). 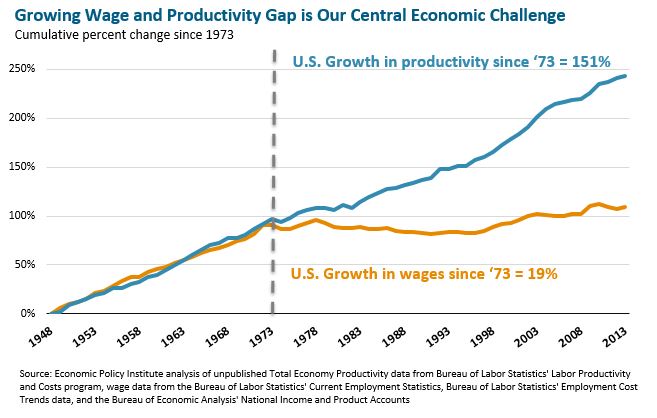 This $11/hour minimum wage in 2017, which is roughly equivalent to $10.75 today, will still be shy of the minimum wage’s 1968 level, adjusted for inflation. And the economy has grown a lot since then. The new $11/hour level is still about $10/hour less than what the minimum wage would be today if it had grown in step with overall economic productivity. Providing an even more striking contrast is growth in average CEO compensation, which has skyrocketed over recent decades. The state minimum wage would be $119.81/hour if it had grown at the same rate as CEO pay since 1979. 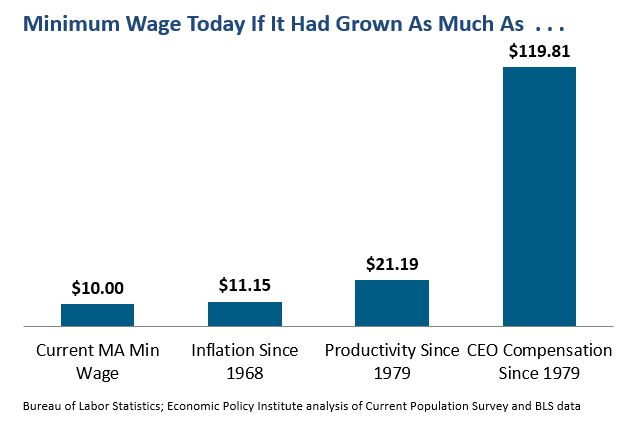 In Massachusetts, there is a proposal to raise the minimum wage to $15/hour over the next several years for workers in fast food and large retail establishments. This proposal only applies to workers at fast food or big box retail businesses that employ 200 or more people (including ones set up as franchises, as long as all common franchises total 200 employees or more).1 Fast food restaurants are defined as locations that have a limited menu, items prepared in advance, and where customers order and pay for items before eating. Large retail establishments, or “big box” stores, are retail businesses where merchandise is sold on site and with a sales area of at least 25,000 square feet.

We estimate that this proposal would directly raise the wages of roughly 180,000 fast food and big box retail workers in Massachusetts who currently earn below $15/hour--72,000 fast food workers and 108,000 big box retail workers.2 Other workers who currently earn slightly above $15/hour will be indirectly affected because their wages can be expected to increase somewhat as overall pay scales rise in response to the minimum wage increase. Workers directly affected by this proposal represent roughly 78 percent of all fast food workers in the state as well as 58 percent of retail.3

Roughly 6 in 7 front-line fast food workers are adults. (These workers are the most likely to earn under $15/hour.)4

Finally, more than half of these workers are women. And working women are increasingly supporting their families economically.5

In considering a proposal like this, it is important to factor in likely changes to business and employee behavior. First, increasing wages often lead to higher operating costs for businesses. The size of these increases depends on several factors, including the share of workers receiving a higher wage, the size of the wage increase, and the labor share of operating costs for the business.6 These higher costs are sometimes passed onto consumers in the form of higher prices. Often, however, increased costs are partially offset by other savings. When employees are paid higher wages, for instance, they tend to stay in their jobs for longer, leading to employer savings from reduced turnover and training costs.7 Employees also tend to become more productive, creating more value for the business for every hour they work (see The Minimum Wage in Massachusetts: Challenges & Opportunities).8 Additionally, employees who earn higher wages spend more in the local economy, leading to some increased consumer demand that serves to offset some decreased demand due to increased costs.

2Estimating the total number of retail workers affected by this proposal is more difficult because it applies only to workers in retail companies with more than 200 employees and that have a sales area of at least 25,000 square feet.

3These figures are based on the Economic Policy Institute analysis of Quarterly Census of Employment and Wages, Occupational Employment Statistics, Current Population Survey, and Economic Census data. Inflation projections from the Congressional Budget Office.

4The estimates for total fast food workers earning less than $15/hour are derived from the Economic Policy Institute's (EPI) analysis of Occupational Employment Statistics data on specific occupations. Estimates for big box retail workers earning less than $15/hour are derived from several analyses: MassBudget identified the total number of workers in large retail establishments by: (1) analyzing ReferenceUSA's database for Massachusetts retail establishments having 200 or more employees to identify retail establishments that likely meet the floor size requirements in the bill; (2) EPI's analysis of the occupation wage distribution of total retail was applied to estimage the number of these workers in large retail earning $15 or less. The distribution of those workers may not be uniform across employer sizes. Demographic profiles of the "front line" workers in MA food services and retail industries are derived from EPI's analysis of the American Community Survey (ACS), pooled data years 2011-2013. The ACS reports these same occupations. EPI assumes that the precentages presented in this report, which cover all front line fast food and retail workers, are roughly representative of those earning less than $15/hour.