A Preview of the Fiscal Year 2018 Budget Challenges

Our state budget is how our Commonwealth funds the things we do together to strengthen our communities, make life better for our people, and build a vibrant economy. The budget process works best when the choices are clear to everyone and made in as deliberate a manner as possible, considering long-term issues as well as immediate challenges.

As budget writers prepare for Fiscal Year (FY) 2018, it appears that the Commonwealth again faces a significant gap between ongoing revenue sources and the cost of maintaining current services. This has been the case for many years in Massachusetts, with a series of budgets balanced using temporary revenue sources and savings initiatives that may prove to be temporary in nature (such as early retirement strategies that can lose their fiscal effectiveness if it turns out that the people who retired need to be replaced). Because the Commonwealth has been using temporary revenue to balance the budget during this period of economic expansion, we have not been able to build up the level of reserves to be prepared for the next recession.

Two steps by state government would allow for a significantly more transparent process and, likely, fewer unwanted budget surprises in the future:

The public release of a maintenance budget that discloses the projected costs of maintaining current services from one fiscal year to the next.1 Nineteen other states publish such a document.2 Massachusetts does not. One of the major issues that led to mid-year budget cuts and use of temporary revenue in FY 2017 was the Administration’s determination that the Legislature had failed to provide needed funding for a number of accounts. There is not, however, any public document available at the beginning of the budget process that provides baseline information on the funding needed in each account to maintain current services. The Governor’s budget provides proposed spending levels for each line item, but there is no systematic way to know whether those recommendations constitute a cut below the cost of current services, an increase above that cost, or are a continuation of funding at the “maintenance level.” For instance, if the budget proposes a decrease in funding for a particular child care account, that could be because of a projected reduction in the number of people who will be eligible for the program or a decision to serve fewer of those who are eligible.

While the Administration likely provides some such data to the Legislature, it is not publicly available. If that information were disclosed publicly, it might decrease the likelihood of budgets being enacted that fail to provide needed funding that ultimately must be appropriated by supplemental budget later in the year. And while many accounts that are funded below maintenance levels do not require supplemental funding during the year – because in some cases a lower level of services can be provided to match the lower funding level – it would allow for greater public understanding of the choices made during the budget process if there were a clear way to identify when funding levels require such service reductions.

Looking carefully at the projections made at the start of the FY 2017 budget process, we see that while the announced projection for actual tax revenue growth was a seemingly reasonable 4.3 percent, the baseline growth that would have been needed to achieve that amount of tax revenue growth was actually 5.55 percent (because some of the revenue growth would be used to pay for already enacted tax cuts and thus wouldn’t be available to fund the budget). Further, the announced 4.3 percent revenue growth projection was a projection of growth above a newly increased FY 2016 projection. The decision to increase the FY 2016 revenue projection in January proved to be a mistake. While revenue growth was looking good in January of 2016, it could have been anticipated that the final FY 2016 collection numbers would not exceed the original estimates. Late in 2015 the stock market declined significantly. While this would not affect tax revenue growth immediately, it could have been anticipated that it would affect revenue collections come April of 2016 (when people would file their 2015 taxes), thus affecting FY 2016 collection totals. That’s exactly what happened. In order to hit the announced 4.3 percent tax revenue growth rate, the baseline tax estimate would have needed to be 6.1 percent above the initial estimate upon which the FY 2016 budget was built – a very high growth rate and one that might have raised red flags with the public. Had that information been publicly available, it is likely that the fiscal problems that emerged towards the end of the FY 2017 budget process would have been recognized much earlier in the year.

To determine the challenges budget writers will need to address in FY 2018, we need to examine three sets of issues: the use of temporary revenue and the underfunding of accounts in the FY 2017 budget; the likely changes in the cost of providing current services in FY 2018; and the likely growth in tax revenue in FY 2018.

Temporary Revenue and Underfunded Accounts in the FY 2017 Budget

Because budget writers will need to find different sources of revenue (or new savings) in FY 2018 to fund the portion of the budget funded with temporary solutions in FY 2017, it is important to determine the total amount of temporary solutions in the FY 2017 budget. The chart below provides a list, totaling $679.2 million. The following are among the largest: 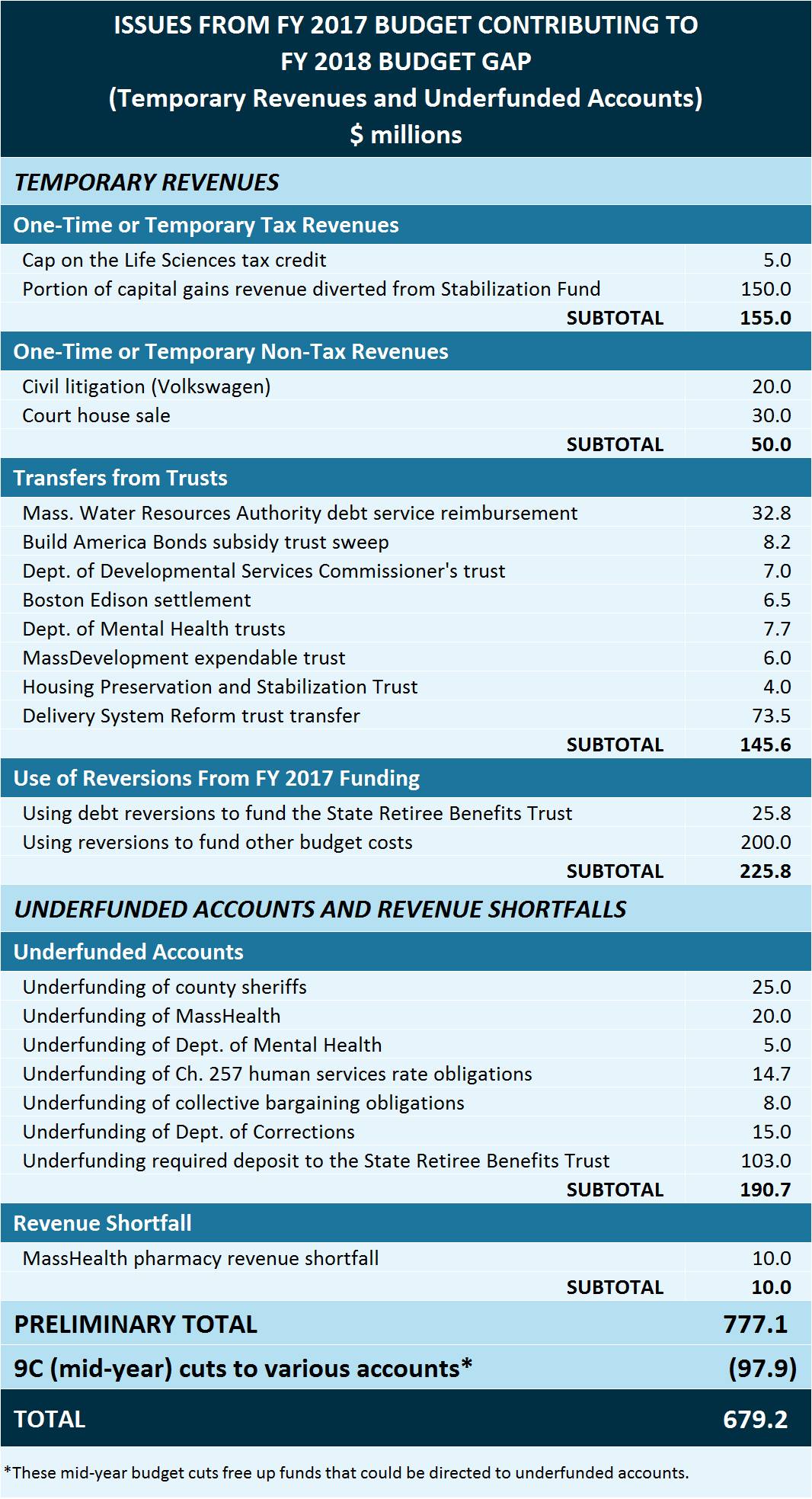 Only the Administration has access to the data needed to provide a reasonably precise estimate of FY 2018 costs to maintain current services. Such an estimate requires examining likely caseload levels for programs (particularly those where all who are eligible have a legal right to the services); projected needs in specific areas (like child protective services); and inflation rates for different types of costs (health care inflation, for example, has been higher than overall inflation rates).

In some cases, that analysis will identify costs growing rapidly, and in other cases it will show maintenance costs declining (for example, in a strong economy when more people can find work, costs for some income support programs decline).

Because such detailed data isn’t publicly available, this budget brief uses broad estimates. We assume that most costs will grow at the rate of inflation. While costs in some areas will grow at a higher rate and others at a lower rate (with the exception of health care costs), there is not a more reliable way to predict overall costs. While there are some specific costs that we could project with more certainty (and those are likely to grow at more than the rate of inflation), there are others that are not easy to project accurately, yet are likely to grow at less than the rate of inflation or decline. Thus it is likely more accurate to use one general adjustment for most of state government. The one exception we make is health care. Health care costs are a very large share of the budget and have a clear pattern of growing at a significantly higher rate than overall inflation. Our projections assume that the cost of most of state government (everything other than health care) will grow at the projected rate of inflation: 2 percent. Since state spending other than health care totals $24.8 billion, two percent growth represents $496.2 million in new costs in FY 2018.

Because of health care cost growth and increasing enrollment in MassHealth, healthcare spending in the state budget has grown faster than the rate of inflation and there is every reason to believe that trend will continue. It would allow for a more transparent and orderly budget process if the Administration were to publish a projection of costs for maintaining our current health care programs and policies after accounting for projected caseload and cost changes. Absent such an estimate, this brief assumes that health care costs in the state budget will grow at the rate the state has adopted as a target for overall health care cost growth: 3.6 percent.3 Since state health care spending (net of reimbursements from the federal government) is $9.4 billion, 3.6 percent growth will mean $339.2 million in new health care costs in FY 2018.

Other state revenue sources are not likely to grow significantly or are already accounted for in our projections. While the state receives significant revenues from fees, that revenue is not projected to increase substantially. Revenue from the lottery is also not projected to grow – and may decline. Federal Medicaid reimbursements are likely to grow significantly, but we already account for that in our calculation of health care costs. We count health care cost growth as only the cost growth on the portion of health care spending ultimately paid by the state (that is total state spending, net of federal revenue). We treat the cost growth on the federal share as essentially cancelled out by the corresponding increased federal reimbursement.

Looking only at the changes in spending and revenue that are projected to occur during FY 2018 (see discussions above), MassBudget calculates a negative net total of $63.5 million, meaning that revenues are expected to grow slightly faster in FY 2018 than expenses, thus slightly reducing the gap carried over from FY 2017. This net total combines our estimates of expected cost growth in FY 2018 with the DOR estimate of projected actual revenue growth in FY 2018 (see table below). 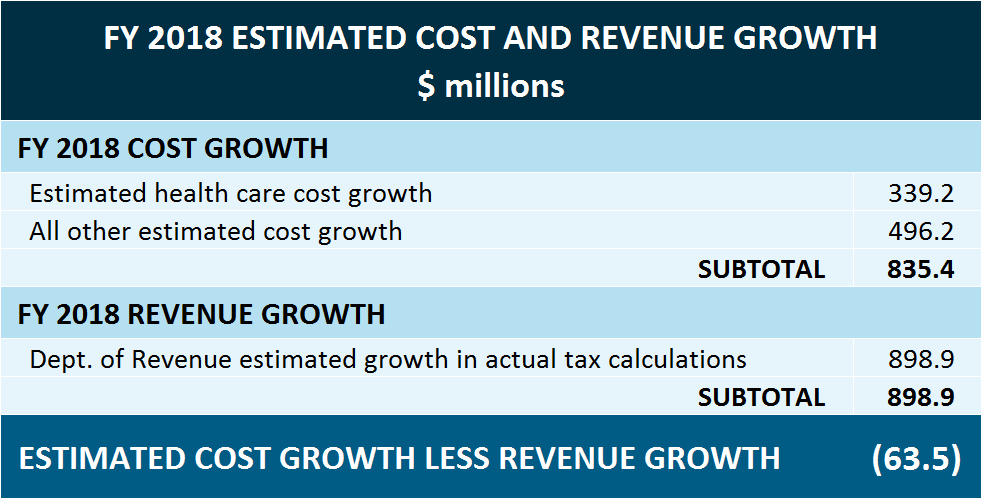 As the FY 2018 budget process begins, the state likely will face an initial gap of approximately $615.7 million. This is composed of: 1) the gap carried over from FY 2017 because of the use of temporary solutions in that budget, and 2) the difference between projected cost growth and projected revenue growth in FY 2018 (see table below). This gap will need to be filled by some combination of temporary revenue and savings, permanent cuts, ongoing savings, and new revenues.

1 Such a process is described in Section 3 of Chapter 29 of the General Laws.

3 The anticipated health care cost growth rate is based on the benchmark set in Chapter 224 of the Acts of 2012, using the rate of growth of total health care expenditures. For 2013-2017, the rate is 3.6 percent, the growth rate of the potential gross state product. See http://www.mass.gov/anf/budget-taxes-and-procurement/oversight-agencies/health-policy-commission/.