So that more students are well-fed and ready to learn, the federal government allows schools to provide free breakfast and lunch to all students in districts with large numbers of low-income students. Schools that implement this program, called Community Eligibility, no longer collect paper forms from every child to determine who is eligible for free or reduced price meals. This improves program efficiency and reduces administrative cost. Instead, schools use a data matching system to identify low-income students based on enrollment in other programs.

This data matching “direct certification” process is now also being used in our school funding (“Chapter 70”) formula, and that has caused some challenges. The Department of Elementary and Secondary Education (DESE) has made significant improvements to address these challenges and, at the direction of the Legislature, is developing further recommendations by December 19.

Drawing from our in-depth work on this issue, MassBudget has identified six strategies to create a more accurate count:

1) Count matches between the school and MassHealth databases that are currently not being counted because of minor differences in how names appear on the different lists, and provide schools with lists of these students. When matching databases, there are often little differences in data—like different spellings of a name (“Allison” versus “Allyson”). The Chapter 70 low-income enrollment count currently includes students when there are certain small differences between the school enrollment lists and SNAP or TAFDC (TANF) lists. The current system also flags other types of small differences (“partial matches”) between these databases so that school administrators can make appropriate corrections in the school lists. DESE is currently not able to identify or to flag these small differences when matching against the MassHealth database, so DESE is unable to count some low-income students because of simple spelling or similar errors. For all three databases, DESE could also expand the types of partial matches included in the counts. 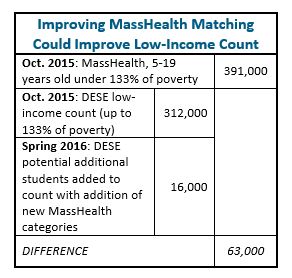 As shown in the table, in October 2015, MassHealth data included close to 391,000 school-aged children with incomes under 133 percent of the federal poverty level. At that same time, DESE’s low-income student count was approximately 312,000 children, based on several school meal direct certification counts up to that point. In the spring of 2016, DESE made important improvements by matching enrollment lists against additional MassHealth programs, and identified close to 16,000 additional students who had not been included in the previous low-income count. Even after these additions, there were as many as 63,000 more children under 133 percent of the federal poverty level on the MassHealth list who had not yet been matched to names on school lists and counted by the low-income count.1 Although some young people in the MassHealth total may attend private schools, have graduated, or otherwise not be attending school, the size of this gap suggests that the matching system has missed qualified students

3) Provide funding for district outreach to families to enroll students in programs for which they are eligible, particularly targeting communities with big differences between prior and current low-income student counts. When families are eligible for programs like SNAP or MassHealth but aren’t enrolled, not only do those students miss out on access to food and health care, they also won’t be picked up by direct certification database matches, which reduces Chapter 70 funding for schools.  Fortunately, schools can play an important role in solving this problem: they tend to be trusted community institutions, and can be important links to the health centers and other community organizations that can help eligible families connect to these supports. For example, when schools help families with incomes below 185 percent of the poverty threshold enroll in SNAP, their children become eligible for free meals. This helps put food on the table, reduces child hunger, and makes sure more children come to school ready to learn. SNAP enrollment also means that the student will be included in the school’s low-income enrollment count, which will in turn increase Chapter 70 aid.

4) Continue integrating state data systems. The state has already made important progress by incorporating the DESE student identifier (SASID) into the SNAP and TAFDC databases. This helps direct certification when students move from school to school. The Administration has also made a commitment towards combining applications for SNAP and MassHealth, which would provide a wide variety of benefits to families and would greatly simplify resolving database matching challenges.

5) Identify other potential statewide databases that could be incorporated into low-income student counts. Homeless students are categorically eligible for free school meals, and this centralized list could be added into DESE’s low-income student enrollment count for Chapter 70.

6) Generate the Fiscal Year 2018 “economically disadvantaged” student count for Chapter 70 as late as possible. As these systems are still evolving, DESE should use the most current data possible.

On top of leading to more accurate low-income student counts for Chapter 70 aid purposes, improvements to the direct certification process could lead to additional benefits for children, families, schools, and the state overall. These include:

1Numbers in table are from MassHealth and DESE data provided to MassBudget by special request.