Our Commonwealth has worked hard to create a strong health care system that can give all of our people the opportunity to thrive and contribute productively to our economy. Yet for many working people, there are still barriers that keep them from leading healthy lives. Currently, Massachusetts does not have a statewide earned paid sick time law, which would give employees time off to address pressing health issues. The absence of this workplace flexibility means that many workers cannot take the time off when sick, putting them at risk of not only losing their job or a days’ pay but also prolonging an illness or infecting others. This brief takes a look at earned paid sick time and its effects on public health. 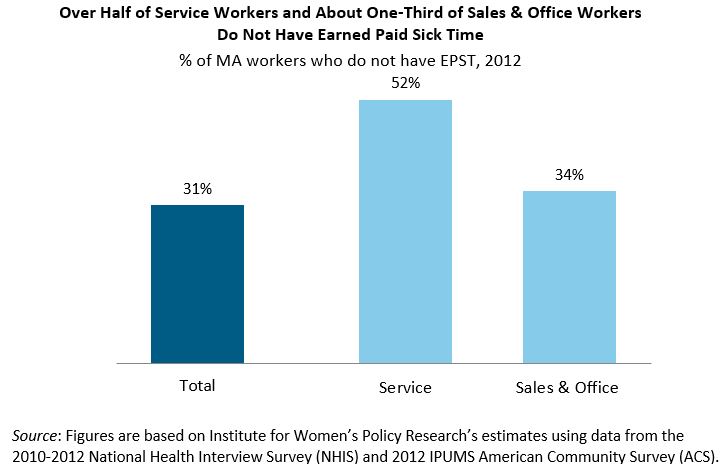 Workers with earned paid sick time report better overall health because they can take time off to address a health issue or access preventive care without risking losing their job or wages.1 But these benefits go beyond the individual health outcomes of workers. It is also important to consider the effects of not having access to earned paid sick time on the general public, families, and the workplace.

Workers without earned paid sick time are more likely to go to work when they are sick.2 In jobs that require frequent contact with the public, such as food and retail jobs, illness is more likely to spread if people report to work sick.3 This not only puts workers and co-workers at risk but also customers and the general public. For instance, during the 2009 H1N1 pandemic, the risk of getting the flu was heightened due to the absence of workplace standards like earned paid sick time.4 This lack of protection hampered workers’ abilities to rest and recuperate after the infectious disease had developed.5 In fact, the data suggests that during this period, workers in the private sector, where earned paid sick time is less common than in the public sector, were more likely to go to work sick with H1N1.6

Parents are more likely to send their child to school sick and seek medical treatment at an emergency room if they cannot get time off during normal business hours, when most doctors’ offices are open.7 This risks the child’s health as well as the health of classmates and teachers. In fact, about 1.3 million hospital emergency room visits could be prevented each year in the United States by providing earned paid sick time to those who currently lack access.8 (See: Balancing Work and Family: The Economic Effects of Earned Paid Sick Time).

The Effects on the Workplace When Employees Come to Work Sick

The Centers on Disease Control and Prevention (CDC) recommends that people with the flu stay home for at least 24 hours after a fever subsides.9 Yet, when employees do not have earned paid sick time, they are more likely to come to work ill before fully recovering.10 This affects workers because it delays recovery and increases complications from minor health problems, potentially placing additional burdens onto our health care system.11 Furthermore, this increases the risk of accidents and spreading illnesses to co-workers, all of which drives up the employer’s health insurance costs.12 In fact, the cost of people coming into work sick each year in the U.S. is estimated at $160 billion.13

9 Centers on Disease Control and Prevention (2014) The Flu: What To Do If You Get Sick. http://www.cdc.gov/flu/takingcare.htm#howlong