Updated from a version released December 23, 2015

We can expand opportunity for our people and strengthen our economy by making smart investments to improve our schools; make our colleges and universities affordable; and build a transportation system that gets families, students, workers and customers to the places they need to be. There are fair and effective ways that we could pay for these investments. This fact sheet examines one option. 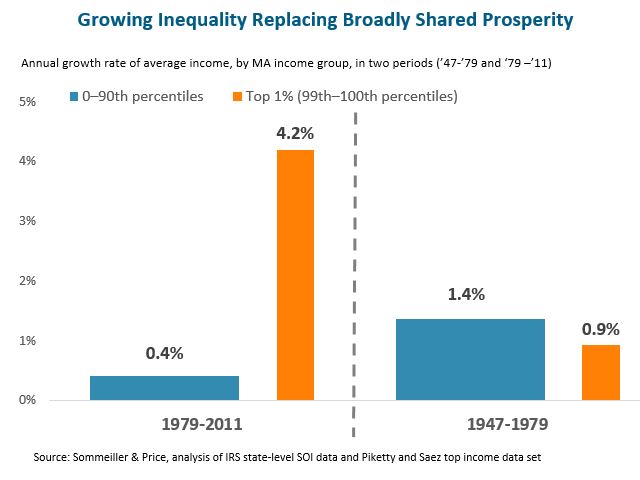 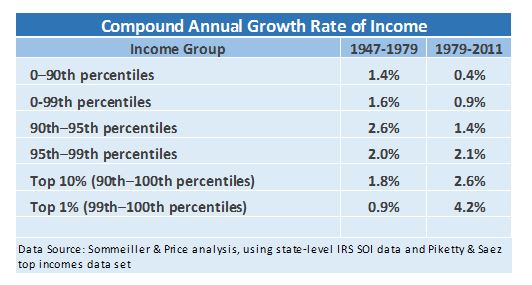 Our economic growth is not translating into significant economic progress for most of our people and this directly harms working families. The lack of more broadly shared economic progress also has harmed our state’s ability to make important investments that can make life better for working people. The highest income residents in Massachusetts, who have captured so much of the gains from our state’s economic growth over the last several decades, actually pay a smaller share of their income in state and local taxes than the rest of the population (see chart, below, and MassBudget’s factsheet, Examining Tax Fairness). When a large share of total income growth goes to the group that contributes the smallest share of their income in taxes, this means tax collections suffer – we wind up with less revenue to invest in schools, colleges, roads, bridges, buses and trains. 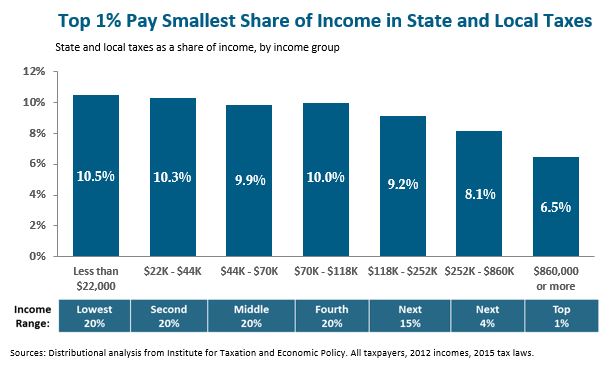 Under a recently proposed change to our tax laws, the state’s highest income households would pay something closer to the share of their income paid by other Massachusetts households (see chart, below). This would generate new revenue to improve public schools, reduce college costs, repair roads and bridges, and fix our public transit systems. 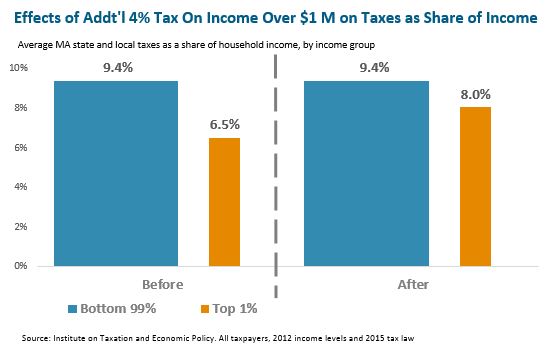 The proposed change would tax income above $1 million at a higher rate than income under $1 million. Income over the $1 million threshold would be subject to an additional 4.0 percent tax. The $1 million threshold would apply uniformly to single filers, head of household filers and married couples filing jointly, and would be indexed to inflation.1 The Massachusetts Department of Revenue (DOR) estimates that this reform would generate about $1.9 billion in new revenue annually in 2019, the first tax year in which the proposal would be implemented (this 2019 estimate translates into the equivalent of about $1.7 billion in today’s dollars).2 DOR estimates that the increase would affect about half of one percent of all filers.

By definition, this change - which would require amending the state constitution - would affect only those households with taxable incomes above $1 million (less than one percent of Massachusetts households) and would only affect the portion of their taxable income that exceeds the $1 million threshold. For example, a household with $1,250,000 of taxable income would pay the additional tax only on the top $250,000 of this total taxable income. As a result, the overall tax rate paid by these high income households on their total taxable income (also called their “effective tax rate”) would rise gradually with increasing income (see table, below). Continuing the example from above, the effective income tax rate on the total $1,250,000 would be 5.8 percent: a 5 percent rate applied to the full $1,250,000 combined with an additional 4.0 percent rate applied just to the $250,000 of income that exceeds the $1 million threshold. 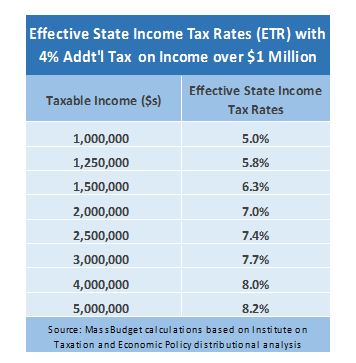 It is worth noting that evidence from states across the nation shows that tax increases on top income households produce substantial new revenue to fund key public priorities,3 while having little to no impact on the residence decisions of these households.4 Large numbers of wealthy households have not packed up and fled from states that have raised taxes in order to move to states that have not. Moreover, a half-century of research has confirmed the value of targeted investments in education and the many positive effects such investments have on individuals, the overall workforce and a state’s economy.5 Research into the broader effects of targeted transportation investments likewise reveals how essential these systems are to creating a successful state economy.6

One way to pay for these investments is with tax reforms that, as has been proposed, would require the state’s highest income households - those households that have benefitted the most during the last several decades and that now have lower tax levels than the rest of us – to pay an additional tax on the share of their income that exceeds $1 million a year.

Massachusetts is among just eight states with flat income tax structures. (Nine states levy no broad-based income tax.) Of the 41 states that tax personal income, 33 tax higher incomes at higher rates. Of these 33 states there are 12 states and the District of Columbia that have a high-income top tax bracket that includes only income of $250,000 or higher (for married joint filers). Eight of these apply a top tax rate close to or above nine percent on high incomes. With a top rate of nine percent, Massachusetts would tax very high income taxpayers at rates similar to or lower than these eight (see chart below). Notably, most of these eight have high per capita incomes and high per capita GDPs, as does Massachusetts. 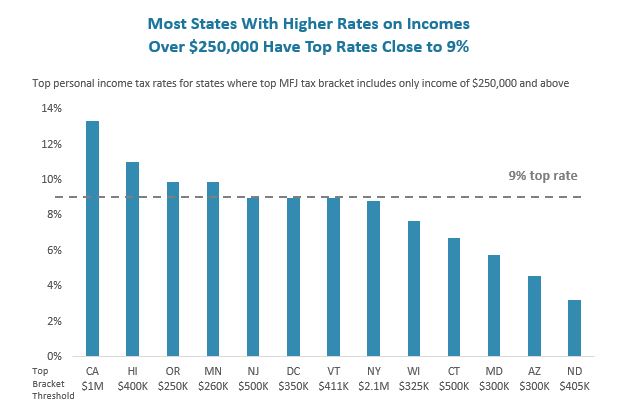 1The million dollar threshold would be indexed to inflation, resulting in regular upward adjustments to the actual threshold figure.

2Highlights from DOR analysis of the Education and Transportation Amendment proposal

5MassBudget and the Economic Policy Institute, A Well-Educated Workforce Is Key to State Prosperity, August 2013: http://www.massbudget.org/report_window.php?loc=education_wages_epi.html