MA Business Taxes:
How Our State Compares to the Nation

HOW DOES THE OVERALL LEVEL OF TAXATION OF BUSINESSES IN MASSACHUSETTS COMPARE TO OTHER STATES?

The updated study was conducted by Ernst & Young for the Council on State Taxation (COST), a Washington, DC based trade association that represents over 600 multistate and multinational corporations.2 The study determined that, in FY 2009, business taxes accounted for a larger percentage of Gross State Product (GSP) in 42 other states than they did in Massachusetts. Had business taxes in Massachusetts (4.0 percent of GSP) consumed the same percentage of Gross State Product as the US average (4.7 percent of GSP), businesses would have contributed an additional $2.3 billion in Massachusetts state and local revenues in FY 2009, according to Ernst and Young’s methodology. 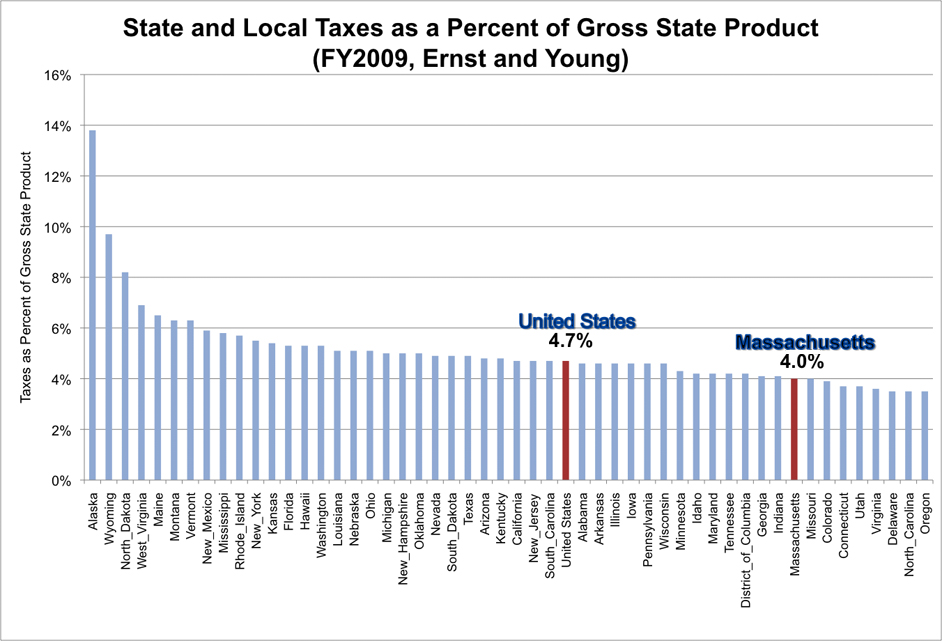 WHY DOES TAX FOUNDATION RANK THE MASSACHUSETTS BUSINESS TAX CLIMATE AS BELOW AVERAGE WHEN THE LEVEL OF BUSINESS TAXES IS AMONG THE LOWEST IN THE NATION?

Another national study that has looked at business taxes is the Tax Foundation’s State Business Tax Climate Index (SBTCI).3 In this study Massachusetts ranks fairly low, with 35 states having a better "business tax climate." It is not surprising that this study finds something very different from the others, because it is measuring something very different. This study does not seek to measure the level of business taxation in each state (as does the study by Ernst & Young). Instead it measures the manner in which states tax businesses.4 The authors of the study explain this clearly:

"Good state tax systems levy low, flat rates on the broadest bases possible, and they treat all taxpayers the same. Variation in the tax treatment of different industries favors one economic activity or decision over another. The more riddled a tax system is with politically motivated preferences the less likely it is that business decisions will be made in response to market forces. The SBTCI rewards those states that apply these principles in five important areas of taxation: major business taxes, individual income taxes, sales taxes, unemployment insurance taxes and property taxes."5

While business taxes in Massachusetts are low, the state’s tax system does not meet these criteria for a good tax system. The Massachusetts corporate tax system includes numerous special tax breaks for specific industries, such as mutual funds, manufacturing, and the motion picture industry. Tax policy analysts can agree or disagree with the Tax Foundation’s criteria for judging a tax system. It is important to recognize, however, that this study does not purport to compare the level of business taxation in different states.

4 For instance, the Tax Foundation corporate tax index examines two sets of policies. One is measured by a rate sub-index consisting of the top tax rate, the level of taxable income at which the top rate kicks in, and the number of brackets. Because when Massachusetts cut business taxes during the 1990s it did so by creating special tax breaks rather than reducing the overall rate, the tax foundation appears not to count those cuts as improving the tax climate. The second sub-index relates to the tax base. (See 2010 State Business Tax Climate Index, pgs 10-14).