A thriving state economy – one that delivers broadly shared prosperity to workers, families and businesses – depends on key public investments in schools and colleges, subways and highways, public safety and more. We pay for these essential investments with our tax dollars. A series of tax cuts dating from the late 1990s and early 2000s (enacted during the dot-com bubble) has reduced our ability to maintain these investments. The long term result of the tax cuts, predictably, has been recurring revenue shortfalls and repeated budget cuts. In particular, cuts made to the Personal Income Tax (PIT) between 1998 and 2002 are costing the Commonwealth some $3 billion annually today. (See MassBudget’s Income Tax Cuts factsheet.)

Adding to the challenge, come January 1st, 2015, the state's tax rate on personal income is set to fall further, dropping from the current 5.20 percent to 5.15 percent. This automatic rate cut – the product of a "trigger" mechanism set in place by lawmakers in 2002 - will cost the Commonwealth another $70 million in lost revenue in the current fiscal year (FY 2015) and more than twice that much in FY 2016.1 This latest revenue loss adds to the losses from two earlier rounds of automatic PIT rate cuts: In January of 2012 the rate was cut from 5.30 percent to 5.25 percent and in January 2014 the rate was cut from 5.25 percent to 5.20 percent. Together, the combined loss in revenue resulting from these three automatic rate cuts will total close to $400 million annually in FY 2016 and years beyond. 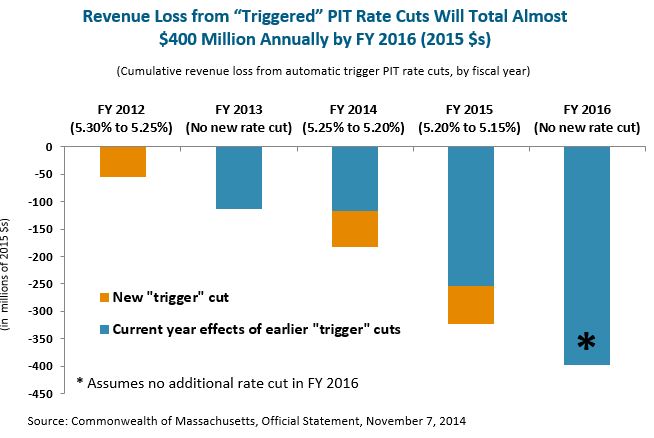 If overall revenue growth continues meeting the trigger requirements in each of the next three years, by 2018 the PIT rate will fall (in three stages) to a pre-set minimum of 5.0 percent. At that point, the resulting cumulative loss in revenue from all of these triggered cuts (from 5.3 percent down to 5.0 percent) will total some $850 million annually.  Notably, the primary beneficiaries of these tax cuts will be the very highest income households (see final chart in this factsheet), who already pay a smaller share of their income toward state and local taxes than do other households. (See MassBudget’s Tax Fairness factsheet)

How does the "trigger" work?

Following the structure laid out in the 2002 law, the personal income tax (PIT) rate is reduced by 0.05 percentage points on January 1st of every year in which all of the following criteria are met:

When the Department of Revenue certifies that each of these criteria has been met, the PIT rate is reduced by 0.05 percentage points, but not below 5.0 percent.

Notably, the trigger mechanism can cut rates even during periods of overall revenue declines. For example, if PIT collections total $10 billion in Year One, then fall to $9 billion in Year Two but rise slightly to $9.3 billion in Year Three, the trigger would be activated by this modest revenue gain. At the start of Year Four, the PIT rate would be cut - even though revenue in Year Three was well below where it had been in Year One. As a result, returning to earlier collection levels once the economy improves becomes a major challenge, as does re-investing in programs that were cut during the downturn.

How did the "trigger" become part of state tax law?

In the late 1990s, the national and state economies were expanding rapidly, with the dot-com bubble fueling consumer and business spending, boosting incomes and delivering unsustainable revenue growth for the Commonwealth. Despite warnings that this bubble, like all bubbles, eventually would burst, tax cut proponents argued that, given several years of particularly strong tax collections, tax rates could be reduced without jeopardizing future funding for essential public programs and services.

Accordingly, voters approved a series of phased PIT rate cuts that eventually would reduce the rate to 5.0 percent. Between 1998 and 2002, the rate was cut from 5.95 percent to 5.3 percent, but during this period, the dot-com bubble finally burst and the national and state economies fell into recession. With revenues falling sharply – engendering significant budget cuts and withdrawals from the state's rainy day fund -  lawmakers recognized that further rate cuts would make a bad situation even worse. In response, in 2002 the PIT rate was frozen at 5.3 percent. Further rate reductions were delayed until such time as a separate set of PIT tax cuts had been fully phased in and revenues again began to grow.2 When these conditions were met - a decade later, in 2012 - the "automatic trigger" kicked in, continuing to push the PIT rate down toward 5.0 percent.

What is the impact of revenue losses on the state budget?

While revenues again are growing, the unaffordable tax cuts enacted during the 1998-2002 period - coupled with two recessions – have forced the Commonwealth to make deep funding cuts in many areas of the budget over the last decade and more. Deep cuts in funding for essential public investments can compromise the state's long term economic strength and harm the current and future well-being of the people who live and work here in Massachusetts. 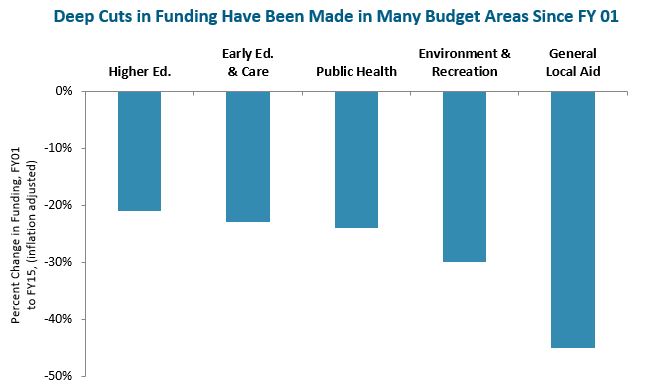 Further rate reductions will delay or prevent reinvestment in these essential programs and services. The most recent, automatically-triggered rate cut (from 5.2 percent to 5.15 percent), along with other factors, has prompted the Governor to begin a round of mid-year 9C cuts to the FY 2015 budget. (For an explanation of 9C cuts, see MassBudget's factsheet The Governor's 9C Cuts and Context)

How does the rate cut affect tax fairness?

As the chart below shows, low and moderate income households will gain less than $20 per household on average from this latest rate cut (the same holds true for the earlier, automatic rate cuts). Upper middle income households (those in the fourth quintile), meanwhile, will receive cuts averaging between $20 and $40 a year. The top 1 percent of households, by contrast, will receive tax cuts averaging more than $900 a year. What this means is that over two-thirds of the total tax cut will go to the 20 percent of households with the highest incomes, with the highest income 1 percent alone receiving almost 25 percent of the total. 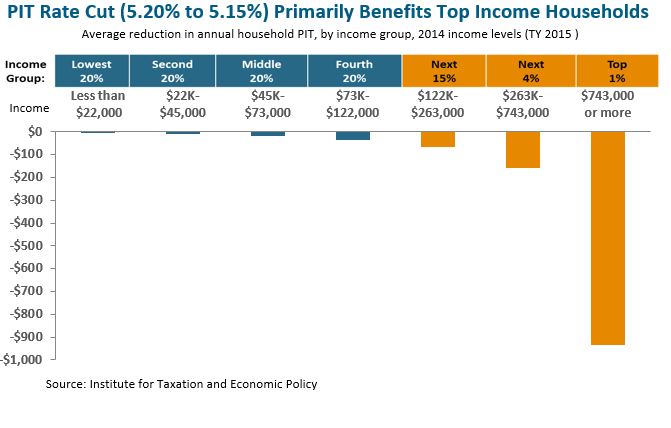 1 The new, lower rate will be in effect only during the second half of FY 2015.

2  Further PIT rate reductions were delayed until after a series of staged increases to the personal exemption were completed in 2008. By 2008, however, the national and state economies were again in deep recession. Revenue growth sufficient to trigger automatic reductions in the PIT rate did not occur again until 2011, leading to the rate cut from 5.30 percent to 5.25 percent on January 1st, 2012.