Long-Term Causes of the Fiscal Crisis

Massachusetts enjoyed substantial budget surpluses in the mid- to late- 1990s. But even before the economic decline of the past year, the state budget already had a structural deficit in FY2008. While the immediate cause of Massachusetts' fiscal crisis is the national recession, policy choices made over the past decade created a structural deficit that have reduced the state's ability to address the economic downturn.

Understanding the origins of the structural deficit requires examining three factors: economic growth, changes in state spending, and changes in state revenue. Over the long term, if spending and revenue grow at the same rate as the overall economy, a state can maintain fiscal stability. 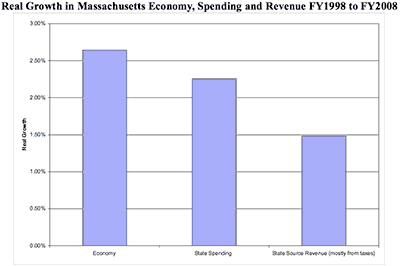 Between FY1998 and FY2008, Massachusetts' economy grew at an annual rate of 2.64 percent in real terms. During this period, net state spending grew at an annual rate of only 2.26 percent. This means that the amount of money being spent on education, health care, human services, local aid, and the rest of the state budget was growing more slowly than the economy as a whole.

If spending was declining as a share of the economy, why did the state's fiscal condition deteriorate? During the same 10 years revenue, which includes state taxes and fees, grew at an annual rate of 1.48 percent which was significantly slower than the growth of the economy as a whole. This was because the state made substantial income tax cuts and the sales tax has not kept pace with changes in the economy. If the tax revenue had grown as a steady share of the economy during these past 10 years, Massachusetts would have shown a substantial surplus and would have been in a far better position to weather the current national recession.

For a complete explanation of the structural deficit, see MassBudget's report Substantial Surpluses to Dangerous Deficits: A Look at State Fiscal Policies from 1998 to 2008.