How Do Business Taxes in MA Compare to Other States? [Corp. Tax Series Pt. 1]


A wide variety of factors influence the decisions businesses make about whether to expand and where to locate their new or expanding operations. These factors include the quality of a state's infrastructure; the skills of its workforce; the proximity to materials and customers; and the overall quality of life available to employees.1  A particular state's tax policy - including tax rates, rules for calculating taxable income, and the availability of tax breaks - also plays a role, though not a primary one.2  This is not surprising given that state and local taxes account for as little as two percent of total business costs for the average corporation operating in the US.3

Nevertheless, if one wishes to compare relative levels of business taxation among the 50 states, it makes most sense to look at all state and local taxes paid by businesses. Some states collect more revenue from businesses using property taxes (typically, a local tax), while other states rely more heavily on corporate income taxes, gross receipts and excise taxes, or general sales taxes (typically, state-level taxes). A meaningful, apples-to-apples comparison of total business tax levels in different states must account for all of the various ways that state and local governments collect taxes from businesses.

A 2018 update of one prominent study - produced regularly by the Council on State Taxation (COST), a Washington DC based trade association representing some 600 multistate and multinational corporations - shows only eight other states with a lower “total effective business tax rate” (TEBTR) than Massachusetts.4  (Massachusetts is tied with Maryland.) TEBTR is a measure of total, combined state and local taxes paid by businesses, as a share of private sector output.5  By this measure, Massachusetts ranks in the bottom fifth of all states in terms of overall business tax levels. 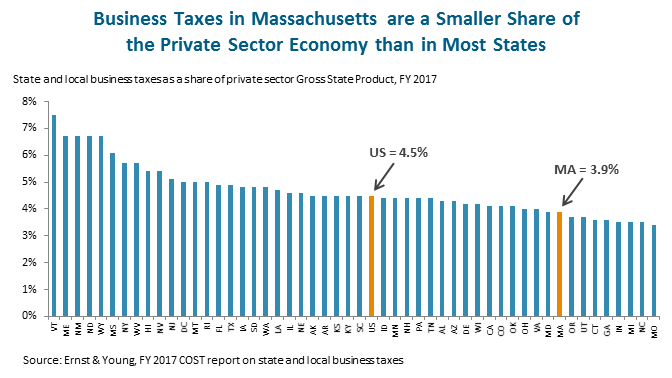 With a TEBTR of 3.9 percent, had business taxes in Massachusetts instead been equal to the U.S. average (4.5 percent), Massachusetts businesses would have contributed an additional $2.9 billion in Massachusetts state and local revenues in FY 2017, using the COST report methodology.6

COST also reports the share of total state and local taxes paid by businesses in each state. The report concludes that Massachusetts businesses together pay 38.9 percent of all state and local taxes collected in the Commonwealth. There are only eight other states in which businesses pay a smaller share of the total.7  (The methodology used in the COST study assumes that none of the cost of state and local business taxes is passed along to other economic actors. The general understanding among economists, however, is that a substantial portion of these tax costs in fact often are borne by a combination of workers and landowners, with variation by industry and location.8)

A separate analysis, performed by the Anderson Economic Group, uses a slightly different methodology, ranking states based on the amount of state and local business taxes paid as a share of pre-tax gross operating surplus, which is a measure of business profitability tracked and published by the US Bureau of Economic Analysis. The Anderson analysis finds that Massachusetts businesses in 2016 collectively paid taxes equal to 8.9 percent of their pre-tax profits.9  By way of comparison, some states collected as little as about 6.5 percent while others collected some 13 percent or more.10  Accordingly, Massachusetts ranks lower than 25 other states by this measure and is below the average rate among the states of 9.4 percent.11  Had Massachusetts businesses paid taxes at the average rate among U.S. states, by this measure they would have contributed another 0.5 percentage points of their pre-tax profits to the Commonwealth, some $928 million in additional taxes in 2016.12 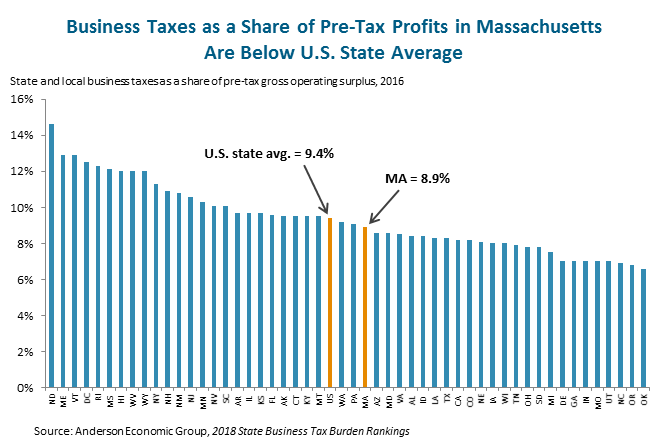 To better understand the impact of state and local taxes on businesses it is useful to place these taxes in the broader corporate tax context, one that includes recent changes at the federal level. The federal 2017 “Tax Cuts and Jobs Act” (TCJA) delivered large tax cuts to many corporations. One of the central features of the TCJA was a sharp reduction in the federal corporate income tax rate, from 35 percent down to 21 percent.15  The TCJA also greatly reduced the taxes owed by U.S. based multinational corporations on profits generated through their overseas operations.16

3 This is an average during the years 2003-2016. Iowa Policy Project, Peter Fisher, Grading the States (see second paragraph, accompanying pie chart, and endnote #2): http://www.gradingstates.org/the-problem-with-tax-cutting-as-economic-policy/state-and-local-business-taxes-are-not-significant-determinants-of-growth/. See also testimony to the New Hampshire Legislature from Robert Tannenwald, former Director of Research for the public policy division of the Federal Reserve Bank of Boston, 11-4-2010: http://www.cbpp.org/cms/index.cfm?fa=view&id=3314

4 As in past years, the update to this study was conducted on behalf of COST by Ernst & Young. COST was founded originally through the Council of State Chambers of Commerce and remains associated with that organization.

6 The US Bureau of Economic Analysis measures Massachusetts's private-sector GSP at $477.114 billion in Fiscal Year 2017. Business taxes as a share of GSP were 0.6 percentage points higher for the US as a whole than for Massachusetts in FY 2017, according to the E&Y study. Converting this percentage point gap into a dollar figure produces an estimate of approximately $2.9 billion in reduced business taxes in Massachusetts relative to the US average in FY 2017 ($477.114 billion x 0.006 = $2.863 billion).

Another useful review of the literature comes from Clemens Fuest via the European Tax Policy Forum. See “Who Bears the Burden of Corporate Income Taxation?”: http://www.etpf.org/respol.html

10 North Dakota, the highest tax state by this measure, collected 14.6 percent of pre-tax corporate profits in 2016. This is due to an especially heavy reliance on severance taxes, which can rise and fall significantly year-to-year depending on a number of factors, including global demand and pricing for particular commodities. Several other states also rely heavily on severance taxes, including Alaska, Wyoming and West Virginia. Because of this unusual tax structure, the tax levels in these states do not provide a good comparison to tax levels in other states.

11 The U.S. state average of 9.4 percent appears on pg. 5, Table 4 of the Anderson Economic Group’s 2018 report. In the accompanying chart of this MassBudget factsheet, where states are tied, they appear in alphabetical order.

A. Difference in percent of tax levels between Massachusetts and average among states: 9.4% - 8.9% = 0.5 percentage points

B. Percent change in tax amount from MA businesses to reach the average among states: 0.5 divided by 8.9 = +5.62 percent of actual tax level

The Massachusetts tax total of $16,518 million appears on pg. 17, Exhibit I of the Anderson Economic Group’s 2018 report.

17 Institute on Taxation and Economic Policy, analysis of Tax Cuts and Jobs Act, provided to MassBudget upon request. Considering the cumulative tax reduction over the course of a full decade (2018 – 2028), ITEP estimates that the cost of TCJA’s corporate tax law changes will exceed $1.1 trillion in federal revenue.

According to U.S. Census data provided in the COST report, businesses collectively paid $738.4 billion in all state and local taxes in FY 2017. The portion of this total paid on business profits alone was $102.1 billion, including income taxes by individuals on business income.