How Do Business Taxes Here Compare to Other States?

A wide variety of factors influence the decisions businesses make about whether to expand and where to locate their new or expanding operations. These factors include the quality of a state's infrastructure; the skills of its workforce; the proximity to materials and customers; and the overall quality of life available to employees.1 A particular state's tax policy - including tax rates, rules for calculating taxable income, and the availability of tax breaks - also plays a role, though not a primary one.2 This is not surprising given that state and local taxes account for as little as two percent of total business costs for the average corporation operating in the U.S.3

If, however, one wishes to examine relative levels of business taxation among the 50 states, in general it makes most sense to look at the entire tax system in each state, including all state and local taxes paid by businesses. Some states collect more revenue from businesses using property taxes (typically a local tax), while other states rely more heavily on corporate income taxes, gross receipts and excise taxes, or general sales taxes (typically state-level taxes). A meaningful, "apples-to-apples" comparison of total business tax levels in different states therefore must account for all of the various ways that state and local governments collect taxes from businesses. 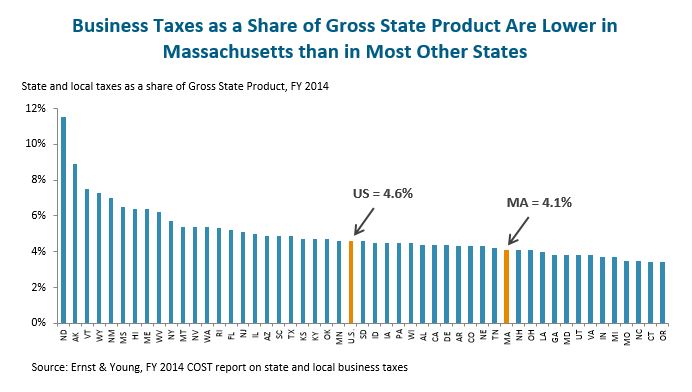 The updated study was conducted by Ernst & Young for the Council on State Taxation, a Washington, D.C.-based trade association that represents over 600 multistate and multinational corporations. The study determined that, in FY 2014, business taxes accounted for a larger percentage of private-sector Gross State Product (GSP) in 36 other states than they did in Massachusetts.4 Had business taxes in Massachusetts (at 4.1 percent of GSP) equaled the percentage of private-sector Gross State Product as the U.S. average (4.6 percent of GSP), businesses would have contributed an additional $2.0 billion in Massachusetts state and local revenues in FY 2014, using Ernst and Young’s methodology.5 Another interesting statistic presented in the COST report is the share of total state and local taxes paid by businesses. Ernst & Young calculates that Massachusetts businesses together pay 39.1 percent of all state and local taxes collected in the Commonwealth--there are only five other states in which businesses pay a smaller share of the total.6

A separate analysis, performed by the Anderson Economic Group, uses a slightly different methodology, ranking states based on the amount of state and local business taxes paid as a share of pre-tax gross operating surplus, which is a measure of business profitability tracked and published by the U.S. Bureau of Economic Analysis.7 Using this approach, the Anderson analysis finds that, including all state and local taxes, Massachusetts businesses in 2013 collectively paid an amount equal to 9.0 percent of their pre-tax profits. By contrast, the lowest tax states collected from 5 to 7 percent of pre-tax profits, while the highest tax states generally collected between 13 and 14 percent.8 Accordingly, Massachusetts ranks 25th from the top among the states by this measure and is just below the U.S. average of 9.1 percent. Had Massachusetts businesses paid taxes at the U.S. average, by this measure they would have contributed another 0.1 percentage points of their pre-tax profits, some $160 million in 2013.9 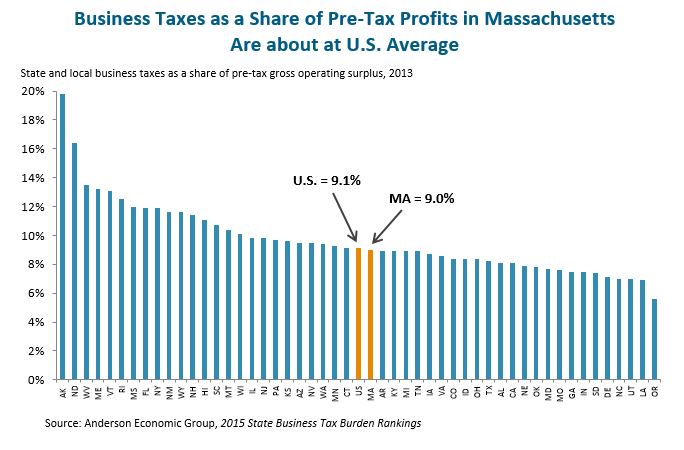 Though the overall level of business taxation in Massachusetts is lower than the level in most other states, Massachusetts receives a larger share of the tax revenue it does collect from businesses through a combination of corporate income taxes and income taxes paid by individual filers on income received from "pass-through" businesses in which these individuals are shareholders.10 Offsetting the higher tax levels on these various forms of corporate profits, businesses in Massachusetts pay substantially less as a percentage of GSP in sales taxes, excise and gross receipts taxes, and licensing fees than do businesses in many other states (see table, below). 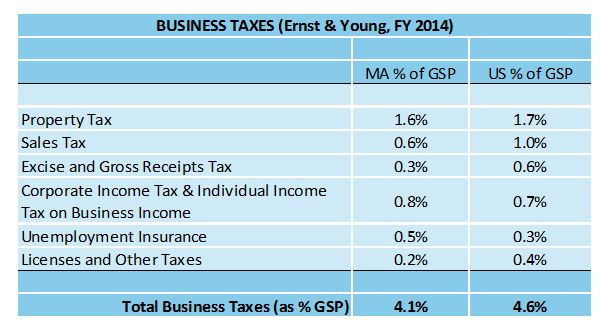 3See testimony to the New Hampshire Legislature from Robert Tannenwald, former Director of Research for the public policy division of the Federal Reserve Bank of Boston: http://www.cbpp.org/cms/index.cfm?fa=view&id=3314

5The U.S. Bureau of Economic Analysis measures Massachusetts's private-sector GSP at $391.8 billion in Calendar Year 2013 and $409.0 billion in 2014. Averaging these two figures to arrive at an estimate of Fiscal Year 2014 private-sector GSP in Massachusetts produces a figure of $400.4 billion. Business taxes as a share of GSP were 0.5 percentage points higher for the U.S. as a whole than for Massachusetts in FY 2014, according to the Ernst & Young study. Converting this percentage point gap into a dollar figure produces an estimate of approximately $2.0 billion in reduced business taxes in Massachusetts relative to the U.S. average in FY 2014 ($400.4 billion  x 0.005 = $2.0 billion).

8Alaska, the highest tax state by this measure, collected 19.8 percent of pre-tax corporate profits in FY 2013. This is due to an especially heavy reliance on severance taxes, though several other states also rely heavily on severance taxes as well, including North Dakota, Wyoming and West Virginia. Because of this unusual tax structure, the tax levels in these states do not provide a good comparison to tax levels in other states.

10Some businesses are structured such that the business profits (and losses) are "passed through" directly to the shareholders, who then pay individual income taxes on this income. In such cases, the corporation itself avoids paying most or all of the corporate income tax it otherwise would owe on this business income. Unlike in past years, the FY 2014 COST study does not break out these two tax types into separate categories, instead grouping them together into a single tax category.