After a deep recession that officially began in December of 2007 and ended in June of 2009, the US economy is now in a period of weak and fragile recovery, one that features both slow growth and high levels of unemployment. For many Americans, the current recovery feels little different than the recession itself.

This certainly holds true for the many Massachusetts families who have felt the direct effects of this historic downturn--Labor Day 2011 offers little cause for celebration among the Bay State's thousands of unemployed and underemployed workers. By many measures, however, Massachusetts has fared far better than most other states during the Great Recession and its aftermath. We have experienced lower rates of unemployment, lost a smaller share of our jobs, and maintained higher median wages for many of our workers.

Still, both the national and state economies have a long way to go toward achieving the levels of robust growth that can generate good quality jobs, reduce unemployment rates quickly, and boost wages for a broad swath of low and middle income workers. The real solutions to our near term economic challenges are to be found at the national level through the application of additional, substantial fiscal stimulus and other measures aimed at job creation (see Berger and Tannenwald, June 2010: http://www.massbudget.org/729.)

State level policies, however, can have important long term effects on the state's overall economic growth, job growth and job quality. Massachusetts's prior decisions to invest in education and to raise the state's minimum wage have helped to mitigate the effects of the national economic crisis here in the Commonwealth. Further action in these areas can help prepare the state to take advantage of future opportunities when a more robust national economic recovery eventually takes hold.

Forty-three months after the start of the Great Recession, Massachusetts has lower levels of unemployment than most other states. 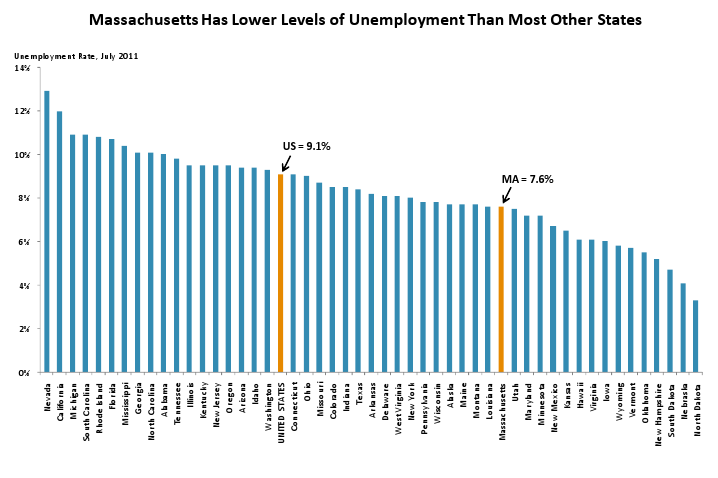 In addition, Massachusetts has maintained lower unemployment rates than the US throughout the duration of the Great Recession and its aftermath. 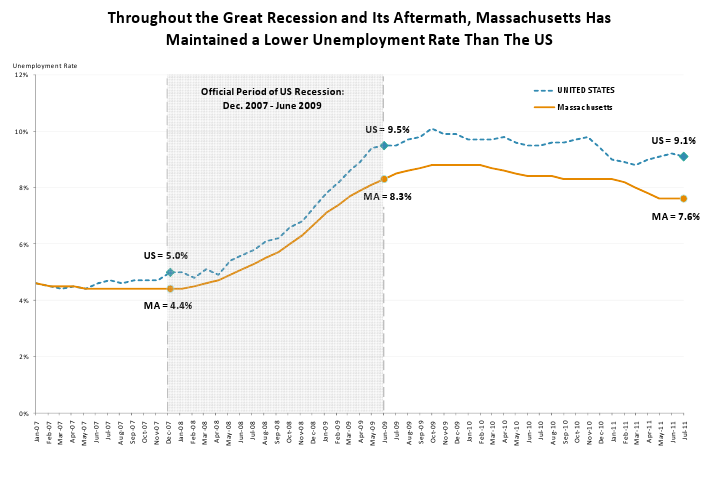 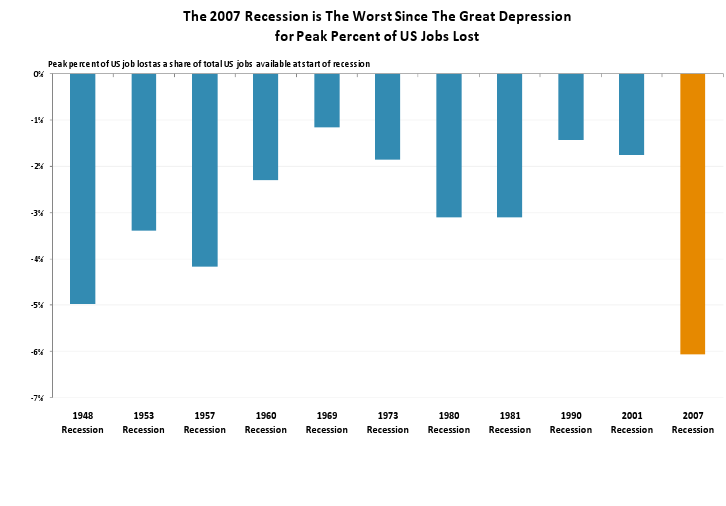 At the same time, it is taking much longer for the US to regain these lost jobs than in past recessions. As of July 2011, forty-three months from the official start of the Great Recession, the US continues to have 4.9 percent fewer jobs than were available at recession's start. Historically, this many months from the onset of a recession, the US typically has regained all the jobs lost during the recession and added substantially to the number of jobs available in the economy. In the few instances where this has not been the case, remaining job losses forty-three months out have been far smaller in magnitude than is currently the case.1 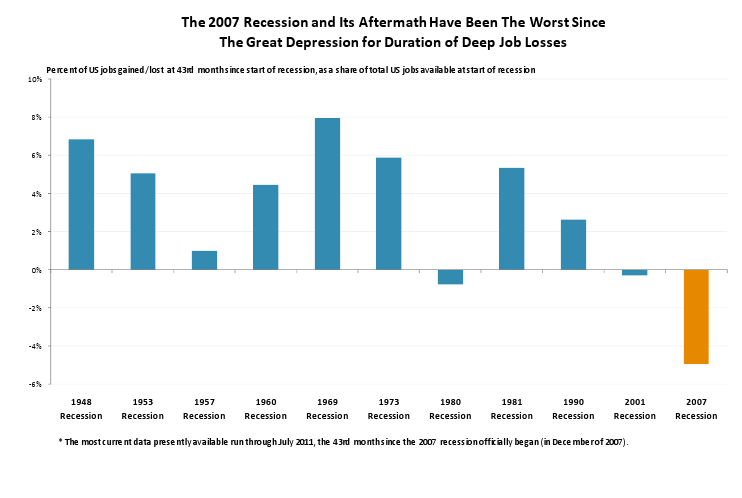 Massachusetts, however, has lost a far smaller share of its jobs (1.4 percent) than most other states have (US average = 4.9 percent). 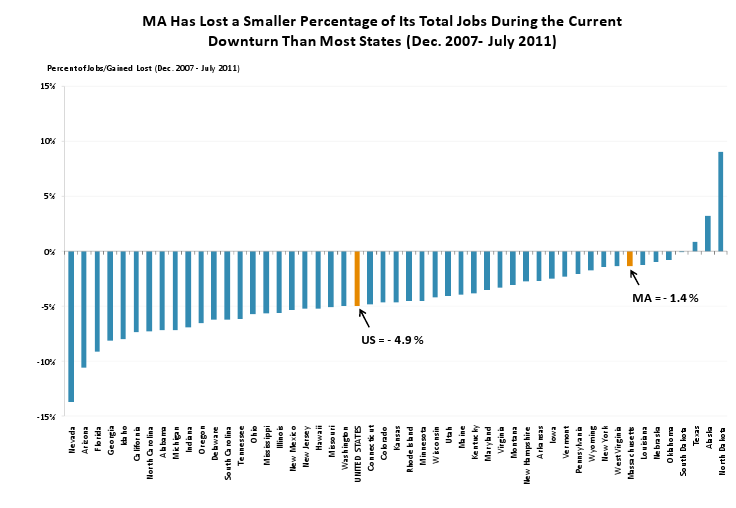 The jobs that have been lost in Massachusetts to date--a net loss of some 46,000 since the start of the recession in December 2007--have not been spread evenly across all employment sectors. Both Construction and Manufacturing jobs have been hard hit, while the Education and Health sector and the Leisure and Hospitality sector both have seen modest growth in the number of jobs available in Massachusetts. With few exceptions, a similar pattern of sectoral job losses/gains has been true for the US as a whole as well. 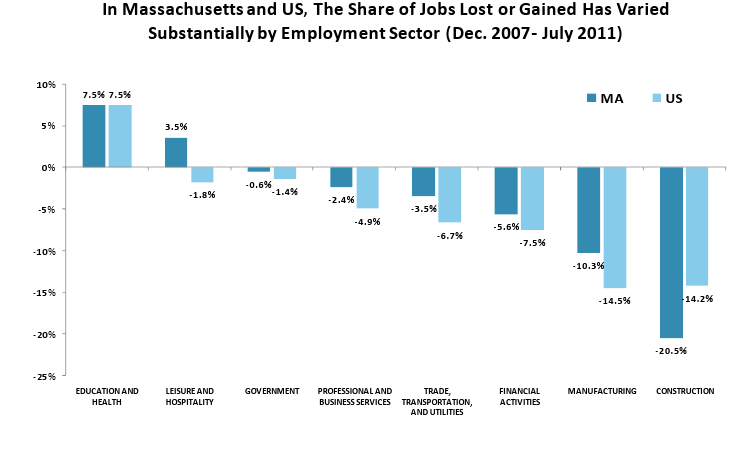 As noted above, at the same time that the nation lost a record share of its jobs during the Great Recession, it also has failed to produce many jobs since the recovery officially began. Simultaneously, the population of working age adults has grown throughout this period. The result is a combined shortfall of more than 11 million jobs needed in order to restore the US economy to rates of employment in effect prior to the recession's onset. 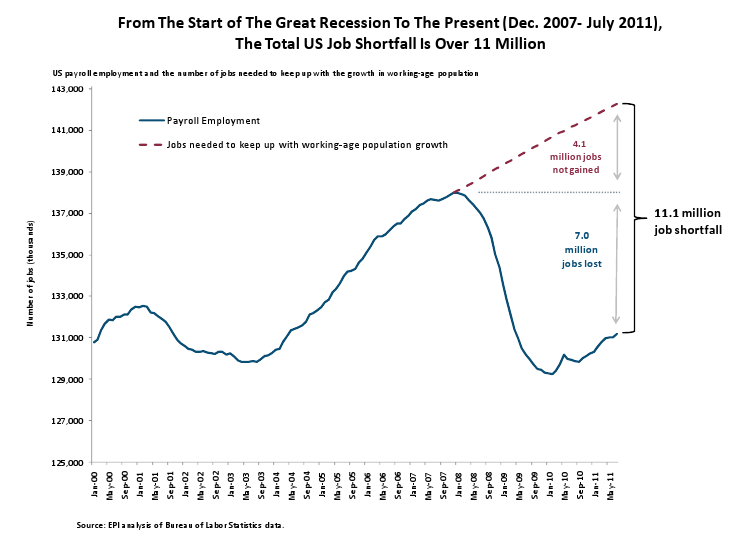 1 The 1980 and 1981 recessions are best understood as a single, protracted, double-dip recession. The 1980 recession was just seven months long, with all the lost jobs regained within five months of that recession's official end date. Recovery from the 1980 recession, however, was quickly followed by a return in 1981 to another 17 months of recession, after which the nation took most of another year to regain the jobs it again had shed. At 43 months from the start of the 1980 recession, therefore, the nation was still working its way out of this second "dip".

In terms of wage growth, Massachusetts has also done better than most other states, especially looking at the experience of the last three decades. Between 1979 and 2010, the state's hourly median wage grew at an average annual rate of 1.0 percent above inflation, more than three times faster than the average U.S. growth of 0.3 percent. Median wage growth in Massachusetts outpaced that of every other state; only the District of Columbia reached a similar level of growth. 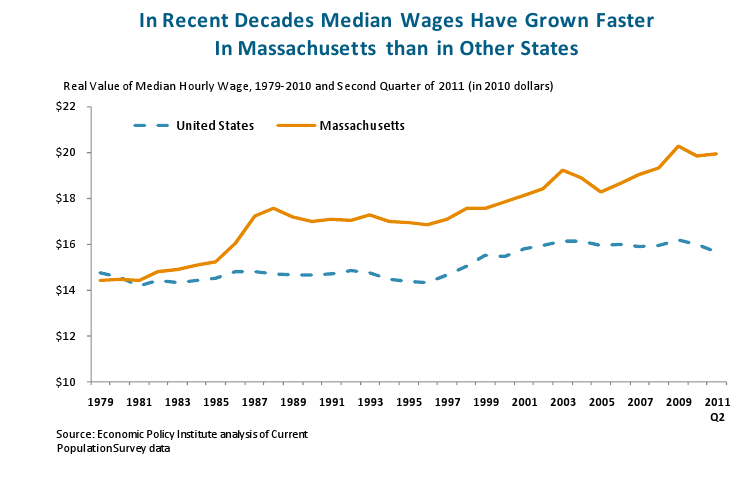 Given the higher rates of growth in the median wage in recent decades, it is not surprising that Massachusetts has one of the highest hourly median wages in the country. Although the recent recession and higher unemployment have tended to suppress wage growth over the last few years, only Connecticut had higher median hourly wages in 2010, a fact that is likely related to the higher educational levels of the state's workforce and the types of jobs that the state has been able to attract. 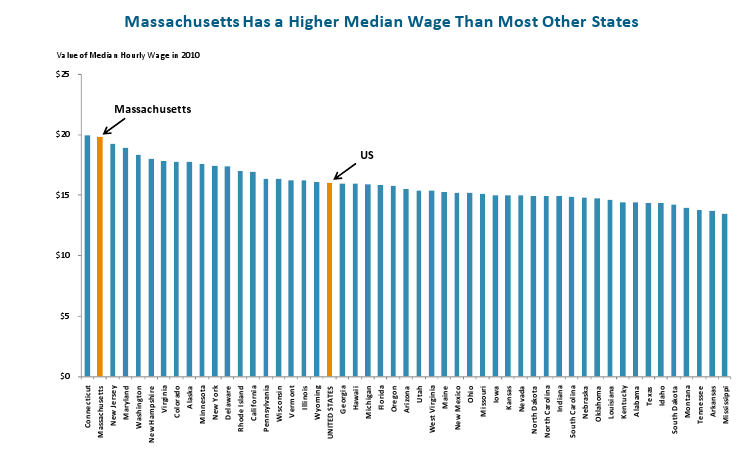 While wages in Massachusetts are higher overall, the state's workers have not shared equally in the growth of the recent decades. After adjusting for inflation, real wages have grown at a steady pace for higher wage earners but growth for lower wage earners has been stagnant. In 1979, wage earners in the 80th percentile earned 2.3 times as much as those at the 20th percentile; today their wages are just over three times higher. 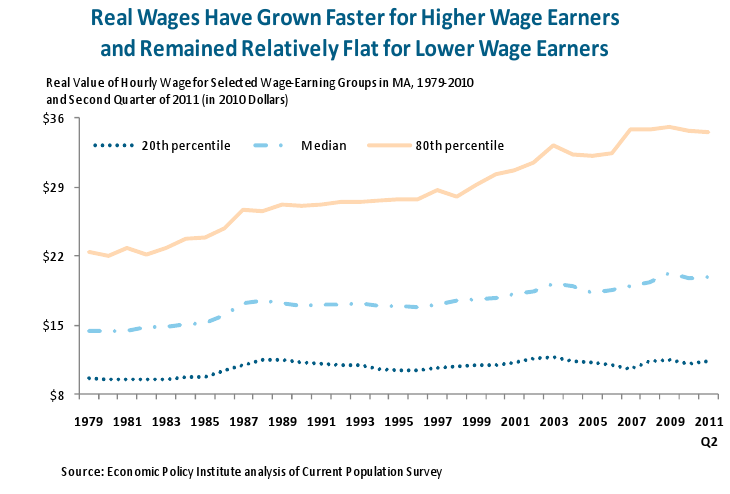 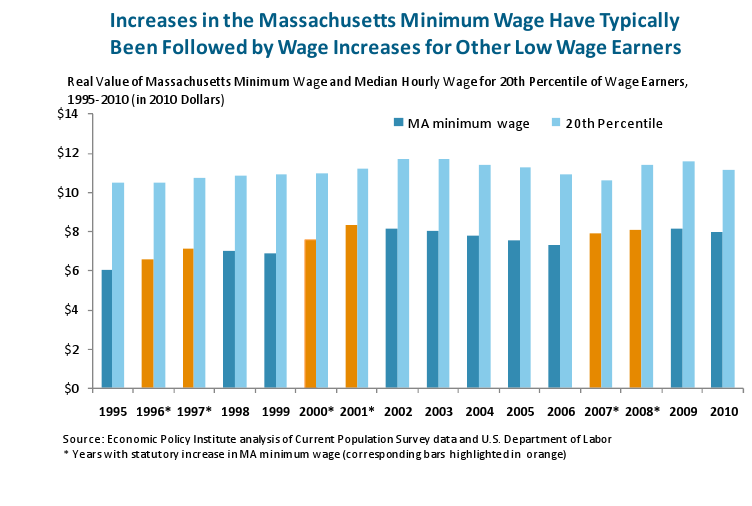 As we have seen, during the latest recession and the current weak recovery, Massachusetts has fared better than many states in terms of its unemployment rate, share of jobs lost and median wage levels. The benefits of the relative strength that Massachusetts has shown, however, have not been shared equally by all the state's workers. Workers with lower levels of educational attainment have borne the brunt of job losses; these same workers also experienced little or no wage growth even before the recession. 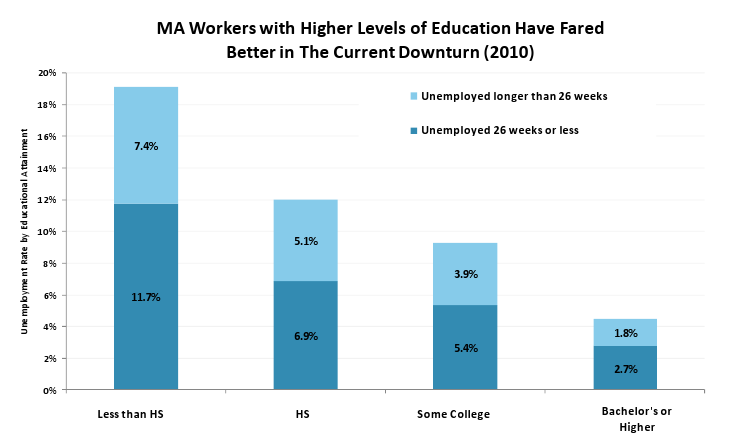 Looking at levels of underemployment - a category that includes 1) unemployed workers, 2) those workers who are working part time because full time opportunities are not available, and 3) workers defined as only "marginally attached" to the labor force—it is similarly clear that rates among Massachusetts workers vary greatly by educational attainment. 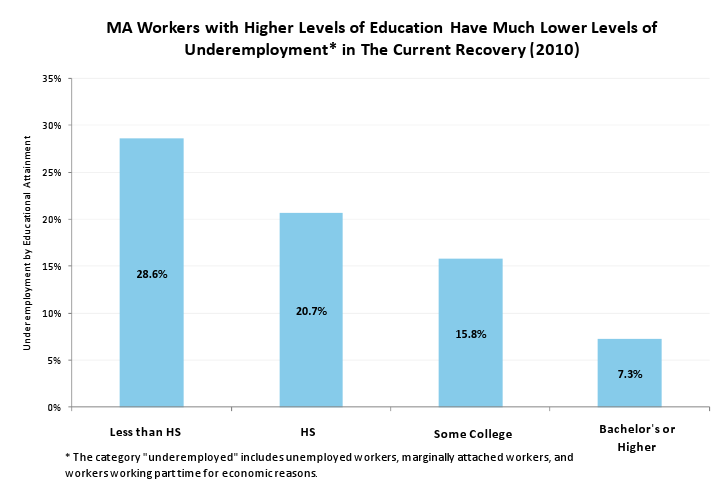 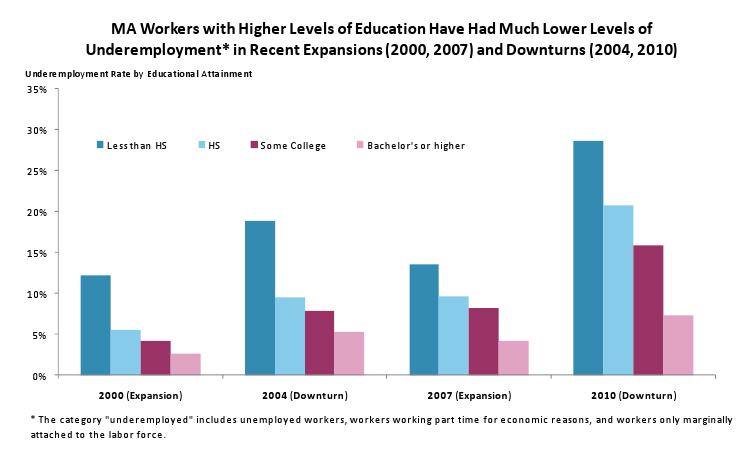 Over the last three decades, median wages also have varied substantially depending on the level of a worker's education. Wage growth for Massachusetts wage earners with bachelors or higher degrees has been much more robust than for other workers with less education. 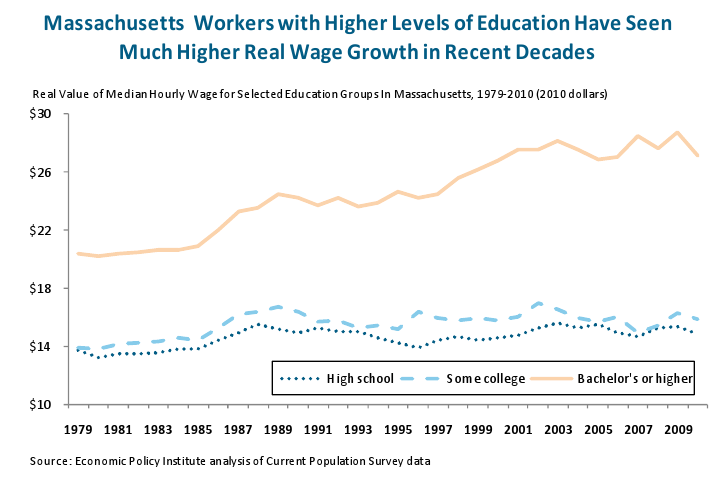 Taking a closer look at wage differentials between those workers with an associate's degree and those with only some college coursework but no degree, the data show that having an associate's degree raises earning power. (Note that the data here looks at the entire Northeast region; there is not sufficient sample size to do this analysis for Massachusetts alone.) 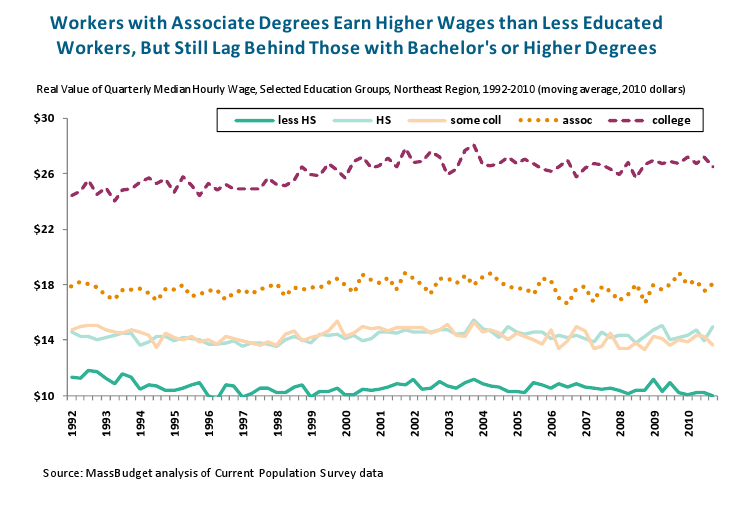 Since 1979, Massachusetts has outpaced the nation in terms of growth in the share of our workforce that holds a Bachelor's degree or higher. Massachusetts now has the most educated workforce of any state in the nation, with 44 percent of the labor force holding a 4-year college degree or a more advanced degree. Having a well-educated workforce has allowed the state to attract and grow jobs that command higher wages and, given our clear advantage in educational attainment, this trend is likely to continue over the long term. 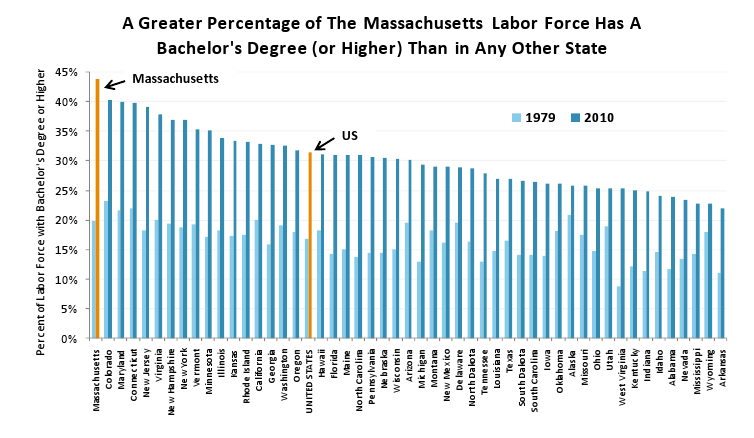 Despite real hardships for many Massachusetts families during the Great Recession and its aftermath, overall, Massachusetts workers have fared better than those in most other states during this historic downturn. We have experienced lower rates of unemployment and lost a smaller share of our jobs. High levels of educational attainment in the Massachusetts work force have allowed us to maintain higher median wages for many of our workers. At the same time, our higher minimum wage has helped raise wages for lower wage workers who typically have less education.

While the near term solutions to slow overall economic growth, high rates of unemployment and weak wage growth for most workers lie primarily at the national level, in Massachusetts we can adopt policies that set the stage for shared prosperity over the longer term, when a stronger national recovery takes hold. Maintaining and cultivating a well-educated workforce can help the state to attract high wage employers, while maintaining an adequate minimum wage can help raise the incomes of our lowest wage workers.