Labor Day will arrive again this Monday, offering all of us a chance to remember and to celebrate the social and economic achievements of American workers. While Massachusetts workers have seen some improvements recently - including lower unemployment, a higher minimum wage and earned paid sick time - unfortunately, since the late 1970s, our national and state economies have not given workers much cause for celebration.

The fact is, we have a problem.

Both our national and our state economies are unbalanced: Since the late 1970s, wages and incomes for most working families have stagnated. By contrast, for the highest income households, incomes have grown at ten times the rate of income growth for the bottom 90% of the population.  (MassBudget report on the State of Working Massachusetts) 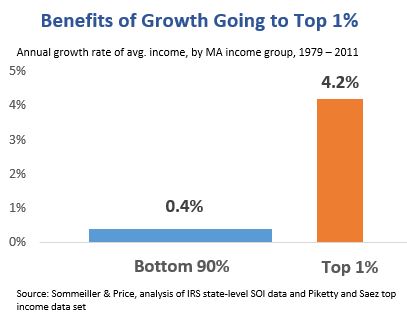 This trend has harmed our state’s ability to make important investments that can make life better for working people.  (MassBudget factsheet on tax cuts)

The highest income residents in Massachusetts, who have captured so much of the gains from our state’s economic growth over the last several decades, actually pay a smaller share of their income in state and local taxes than the rest of the population. (MassBudget factsheet on tax fairness)

If the highest income households paid the same share of their income in state and local taxes as the rest of us, this would allow for increased investments in key drivers of economic prosperity, like high-quality public education and efficient transportation systems. (MassBudget report on the benefits of a well-educated workforce)

The good news is there are solutions.

One federal-level solution is to reform outdated rules for determining which workers qualify for overtime pay when they work more than 40 hours in a given week. Currently, hourly workers are entitled to be paid 1.5 times their regular hourly rate when they work more than 40 hours. For workers who are salaried (i.e., instead paid a fixed amount for a year’s employment), guaranteed overtime pay depends on both their salary level and on the nature of their work duties. Salaried workers who currently earn more than $23,660 per year AND are classified as managers or supervisors are not guaranteed overtime pay. The current overtime salary threshold of $23,660 per year, however, is less than half of what it was in 1975, when adjusted for inflation. As a consequence, many salaried workers classified by their employers as “managers” or “supervisors” today are not guaranteed overtime pay even if they often perform duties no different from ordinary rank-and-file workers. In 1975, 60 percent of salaried workers nationwide were guaranteed time-and-half pay when working overtime, but today less than 10 percent enjoy the same guarantee. The Department of Labor has proposed a plan to raise the salary threshold to $50,440 annually, close to its inflation-adjusted 1975 level. Under this proposed update, an additional 260,000 Massachusetts workers would be guaranteed time-and-a-half pay when working more than 40 hours in a week. (Economic Policy Institute & Center for American Progress factsheets on updating and improving overtime rules)

At the state-level, Massachusetts could invest more in high-quality public education and in transportation systems that get people to work and get customers to businesses. One proposal would generate new funds for such investments by applying a higher tax rate to income above $1 million, also making our tax system fairer. High income taxpayers currently pay a smaller share of their income in state and local taxes. (MassBudget factsheet on tax fairness)

Happily, in the last year, Massachusetts has taken some important steps to help boost wages and improve working conditions, including raising our statewide minimum wage, requiring most employers to provide earned paid sick time, and increasing the value of our state Earned Income Tax Credit.

There are meaningful steps that could be taken at the state and national levels, to reverse the negative trends of recent decades, improving working conditions and raising wages and incomes for millions of working families. Significant progress towards creating an economy that supports broadly shared prosperity is possible. This would give us all something to celebrate, not just on Labor Day, but every day of the year. (See also U.S. Department of Labor website for more on the history of Labor Day.)