A strong state economy is one that provides all residents with opportunity and a high quality of life - not least of all, workers and their families. As we head toward Labor Day 2014, there is both cause for concern and reason to celebrate the current well-being and future prospects of workers in Massachusetts.

Worryingly, over the last several decades, stagnant or declining wages have become the "new normal" for most workers in the U.S. This leaves them with lower incomes, a reduced quality-of-life, and fewer opportunities.1

This year, however, the people of our commonwealth and our elected officials took action to push back against this trend. Through their efforts, the state minimum wage now will rise by a dollar a year for each of the next three years, raising the wages of about 600,000 Massachusetts workers. (Read more about the impact of the minimum wage increase here.) This will directly help these low wage workers and their families.  And as these workers are able to buy more goods and services in our local communities, the wage increase can strengthen our state economy.

Yet our state, like the rest of the nation, still faces troubling trends:  the ongoing concentration of income and extreme wealth makes our economy more unstable and reduces prospects for future economic growth.2  While deeper solutions to these problems will require action at the federal level, the Commonwealth can take important steps to improve both working conditions and access to opportunity for Massachusetts workers. These steps include expanding access to earned paid sick time and investing in early education and childcare, higher education and workforce training opportunities.

In the pages below, we present charts and data to describe and explain these trends and discuss further the options for state-level reforms.

Massachusetts' workers - particularly those from moderate and low income households - face substantial challenges. Chief among these is a decades-long trend of stagnant or lackluster wage growth (a trend seen throughout the U.S., including Massachusetts).3  Notably, this weak wage growth occurred even as overall productivity continued to rise.4  Compared to U.S. workers in the 1970s, today’s workers are producing more than twice as many goods and services for every hour they work. And yet in recent years, that has not translated into corresponding wage and income gains for most workers. 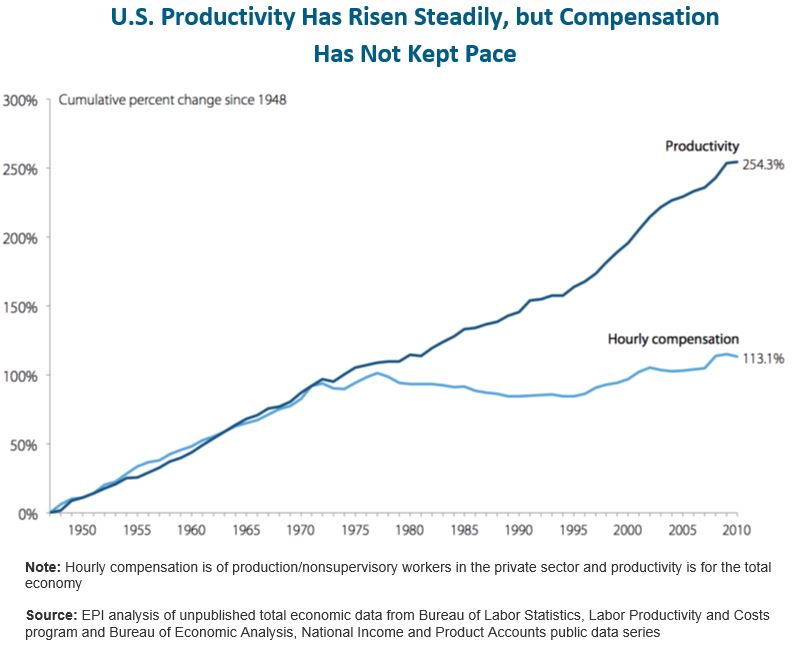 Throughout the 1950s, 1960s and much of the 1970s, wage and income growth grew in lockstep with rising productivity (see chart, above). And during these years, these gains were shared broadly and equitably - U.S. households at all income levels experienced similar rates of income growth during this period.5  High levels of public and private sector unionization during this period help explain much of this pattern (though other factors also played a role).

Starting in the later 1970s, however, those at the top began to take an increasingly large share of income gains; over the last three to four decades, productivity gains have not been matched by accompanying gains in worker compensation (see chart, above).  This shift occurred both at the national level and here in Massachusetts.6

Had overall income growth in Massachusetts during the 1979-2011 period instead been shared equally among high-, middle- and low-income households – as was the case during the 1950s, 1960s and much of the 1970s - 80 percent of Massachusetts households would have experienced substantial additional income gains (see chart, below).7  Instead, these households, on average, now are earning $10,000 - $15,000 a year less than they could be, had the earlier “shared growth” approach been continued. 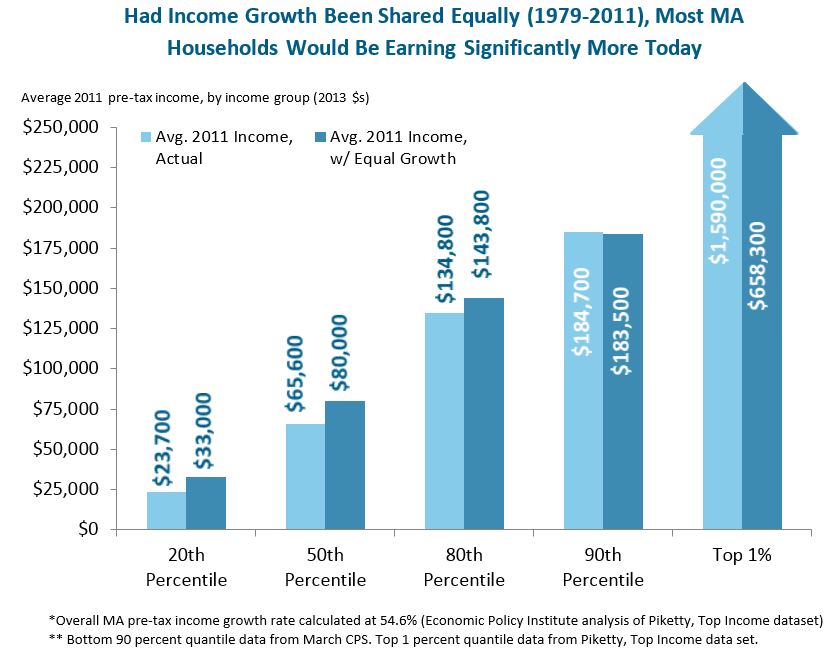 Meanwhile, households at the 90th percentile are averaging about the same level of income as they would under a shared growth approach. Those in the top 1 percent, however, are earning more than twice as much as they would have, had the pattern from the 1950s through the 1970s continued through to the current era (see chart, above).8

There are several fundamental problems that arise from stagnant wages and increasing levels of extreme inequality. First, without meaningful income gains (despite large gains in productivity), many Massachusetts workers continue to struggle just to meet their basic needs, while facing a limited set of opportunities. Second, as income and wealth become heavily concentrated in the hands of a select few, the economy becomes unbalanced, potentially making it more prone to downturns and recessions, and constraining prospects for robust growth.9

Many of the best responses to these nationwide problems of wage and income stagnation and the growth of extreme inequality lie at the federal rather than the state level. These include improving workers' ability to form effective unions; boosting employment and wages through monetary and fiscal policy; ensuring that international trade policy benefits rather than undermines American workers; regulating the financial sector so that it serves rather than destabilizes the broader economy; and many more.10

Massachusetts, however, has taken an important step at the state-level toward counteracting these troubling wage and income trends. As noted, by 2017 the state minimum wage will rise to $11 an hour, benefiting over 600,000 workers in the Commonwealth and some 240,000 children who live in affected households. For a full-time minimum wage worker, this wage increase will translate into an inflation-adjusted gain of $4,600 in additional annual income.

Still other options exist for improving the incomes and working conditions of Massachusetts workers by strengthening state labor standards. For example, currently about one-in-three workers in the Commonwealth does not have access to earned paid sick time (EPST). 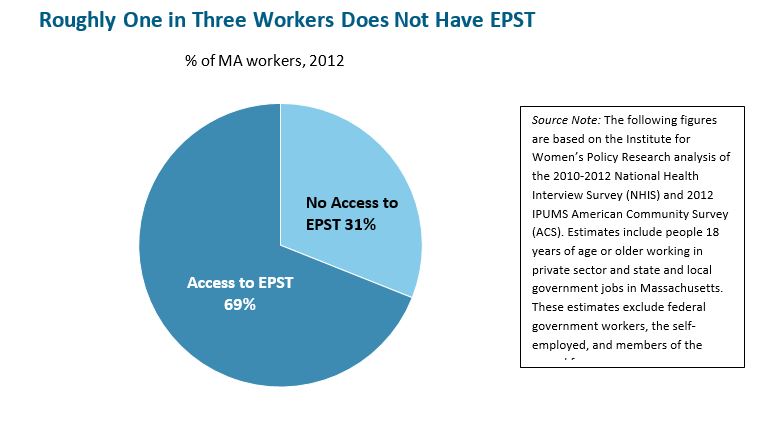 And more than half of lower income workers do not.11  (To read more about EPST, see MassBudget's EPST FAQs) 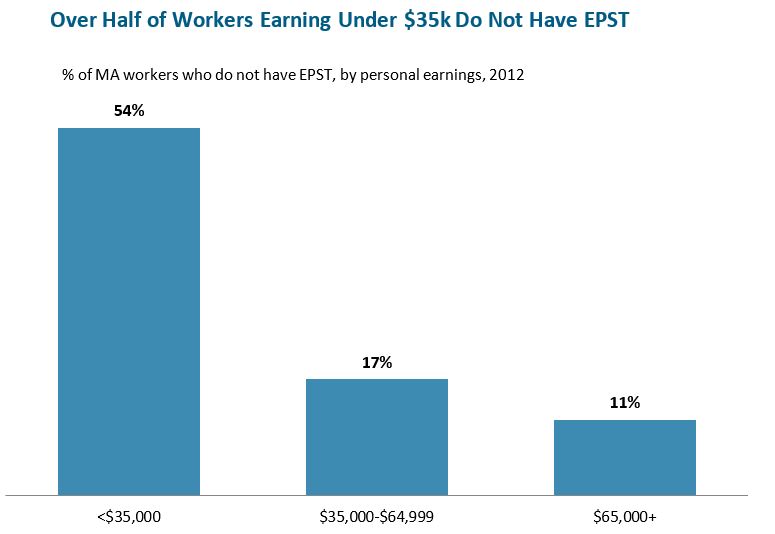 For a worker without EPST, taking time off from work to get well or to care for a sick child – or even to make a necessary visit to a doctor – means a loss of much needed pay and possibly the loss of his or her job. One proposal under discussion would allow workers to earn an hour of paid sick time for every 30 hours worked, up to a maximum of five sick days per year. Ensuring that Massachusetts workers have access to earned paid sick time can improve individual and public health, and increase workers’ economic security.

In addition to strengthening state labor standards, Massachusetts can improve access to economic opportunity in a number of other ways. Investing in early education and care can make quality childcare more accessible and affordable for working parents. This in turn can expand work options and raise family incomes while helping children prepare for success in kindergarten and beyond; studies show that quality early care improves later academic and social outcomes for kids. (Read more here about the positive effects of quality early education and care.) Since 2001, state investment in these programs has been cut by close to $170 million a year, a reduction in annual funding of 23 percent (adjusted for inflation).12 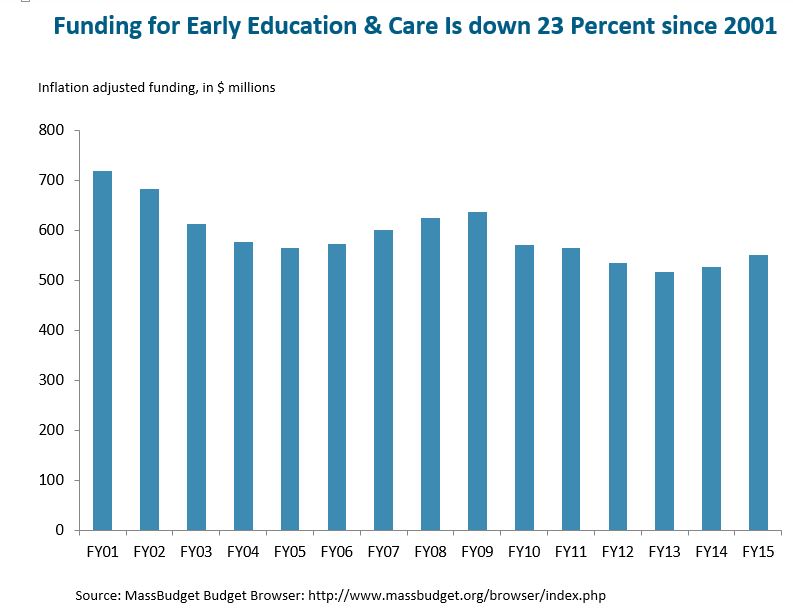 Similarly, since 2001 the Commonwealth has cut funding for higher education by some $320 million or 21 percent (adjusted for inflation).13  These cuts have important implications for individual worker’s and the state economy: on average, workers with higher levels of education have both higher incomes and lower rates of unemployment (see MassBudget's State of Working Massachusetts: http://www.massbudget.org/reports/swma/index.php ). 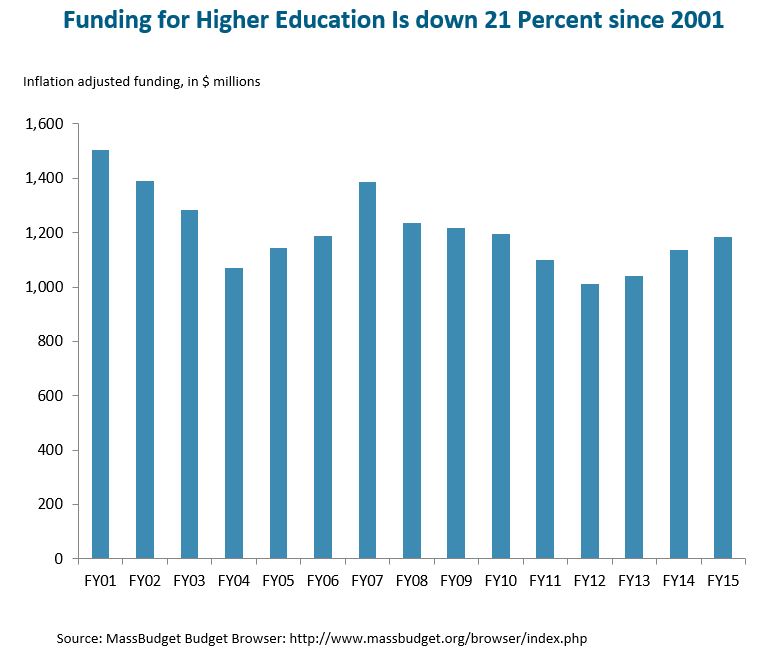 Investments in workforce training also can provide workers with opportunities to improve skills and raise incomes. Here again, Massachusetts could choose to reinvest in these programs; since 2001, annual funding for workforce training has dropped from $173 million to $125 million or 28 percent (adjusted for inflation).14  (For more on workforce training, see MassBudget's new Jobs & Workforce Budget, an online resource: http://workforce.massbudget.org/ ) 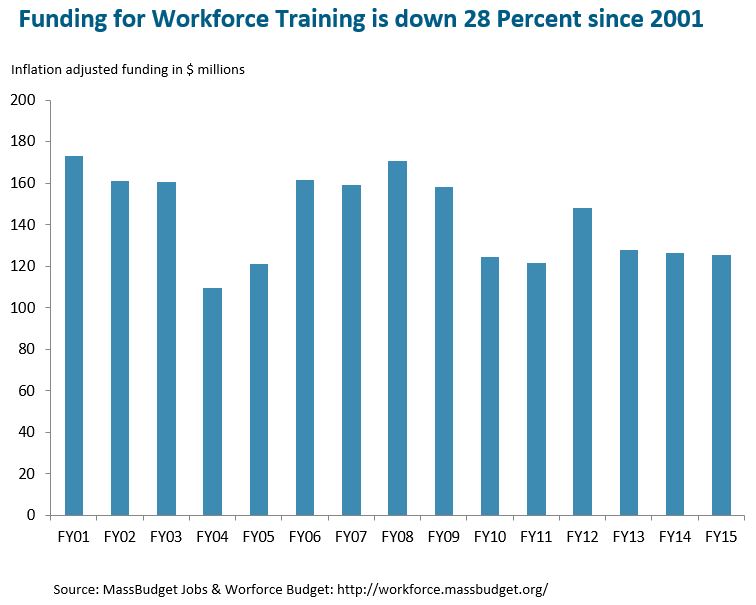 With smart policies, the Commonwealth can begin to reverse the growth in extreme inequality that has occurred since the late 1970s. This in turn can expand opportunity and improve living standards for workers and their families, from the Berkshires to Buzzards Bay.

7 This is the most current data available with which to perform this analysis.