To build a strong economy that expands opportunity, a state needs a transportation system that works. Over many years, Massachusetts communities have come together to build and maintain a system of roads, public transit, sidewalks, ferries, airports and bike paths. The quality of this infrastructure largely determines the convenience and reliability of travel in the Commonwealth. State investment in transportation can boost economic productivity and improve access to jobs, school and other opportunities. According to business leaders, including the President and CEO of the Boston Region’s Chamber of Commerce, “improving transportation is the top public policy priority for the business community.” 1But information from the Department of Transportation (MassDOT) suggests that current levels of investment are not enough to keep our roads, bridges and public transit system in good working order.

Well-maintained roads save time and money. By one estimate, deteriorated roads cost an average motorist in Massachusetts $483 each year in additional operating costs, a total of $2.3 billion annually for the entire state in additional vehicle repair costs, accelerated vehicle depreciation, increased gas consumption and increased tire wear.2 According to a study by the American Association of State Highway and Transportation Officials, every $1 spent to keep a deteriorated road in good condition also avoids $6 or more in future costs to later rebuild the road. 3

Official evaluations rate 37 percent of state-owned road miles in “Poor” or “Fair” condition in Massachusetts.4 MassDOT currently invests an average of $54 million annually to repave roads. But at this level, they project road conditions will deteriorate further, with 79 percent of roads in poor or fair condition by 2025.  Merely preventing current road conditions from worsening would require a four-fold increase in investment. Increasing annual investment six-fold to $300 million annually would reduce the percent of poor or fair road miles to 17 percent, below half the current level. 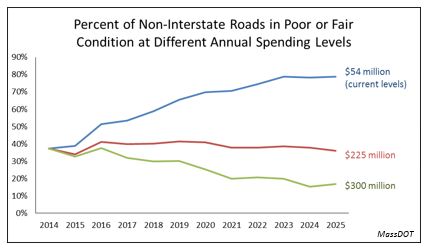 Massachusetts residents depend on a system of over 5,000 bridges.5 When bridges fall into disrepair, they can become unsafe or weight restrictions and lane closures may be imposed, slowing commerce and increasing traffic congestion.

Recent efforts to improve bridges in the Commonwealth demonstrate the impact of effective investment. Back in 2008, state engineers had identified 543 state bridges as “structurally deficient,” meaning they found major defects with a weight-bearing component of these bridges.6 MassDOT expected an increase to 697 structurally deficient bridges by 2016 at planned levels of investment.7 But in the wake of a tragic bridge collapse in Minnesota, the Commonwealth launched a $3 billion Accelerated Bridge Program to repair, replace, maintain and preserve bridge spans around the state. As of the end of 2015, the number of these structurally deficient bridges had declined to 415.8

The Massachusetts Bay Transportation Authority (MBTA) provides almost 400 million annual trips to riders across the region,11 making possible a dense and vibrant regional economy that otherwise would be overwhelmed by auto traffic congestion. Like the other 15 Regional Transit Authorities across the state, the agency provides vital travel options for people unable to drive or who lack access to a car.

The MBTA’s shutdowns last winter highlighted both how essential the agency is to daily life and how fragile and rickety its service has become. In order to fill annual operating shortfalls, the MBTA had long tended to defer spending on maintenance, modernization and the purchase of new vehicles.12 As a result, vehicles are overdue for replacement, track signaling and power systems are obsolete, and stations are dilapidated, with many still inaccessible to people with disabilities. The agency contends with frequent breakdowns and additional time-consuming measures to ensure safety.

The transit agency’s Fiscal and Management Control Board finds that, based on the resources currently available to fix the MBTA, the system faces a $600 million shortfall over the coming five years. This amount does not include the costs to comply with federal mandates for safety and accessibility or otherwise upgrading or expanding capacity on existing routes.13 Efforts to improve the efficiency of operations and management might free up some fraction of these resources. On the other hand, the figure does not include any investment to accommodate increased demand or create new routes and stations that would expand capacity for a growing economy.

2Based on 2013 estimates of the number of motorists , and current vehicle operating costs in Massachusetts and AAA estimates that apply the Highway Development Management model (HDM-4), “Massachusetts Transportation by the Numbers: Meeting the State’s Need for Safe and Efficient Mobility” Dividing TRIP’s $2.3 billion total figure for additional vehicle operating costs by the 4,765,586 licensed drivers in the state listed by Federal Highway Statistics 2013 yields $483 per licensed driver. This figure does not include costs due to traffic congestion. TRIP is a nonprofit, founded in 1971, sponsored by road building companies, insurance companies, equipment manufacturers, distributors and suppliers; businesses involved in transit engineering and construction; and labor unions.

9The Accelerated Bridge Program was financed under the chapter 233 of the acts of 2008 . In 2016, the Administration has proposed a five-year $50 million program for localities to fix small bridges.

12MBTA Advisory Board, “Born Broke: How the MBTA found itself with too much debt, the corrosive effects of this debt, and a comparison of the T’s deficit to its peers” (April 2009); Transportation for Massachusetts, Maxed Out: Massachusetts Transportation at a Financing Crossroads“(October 2011).