In Massachusetts – one of only four states boasting the term “commonwealth” in the official state name - we seek to build a thriving state economy that delivers broadly shared prosperity to workers and their families. Unfortunately, since the 1970s, wages have stagnated for low and moderate income workers in Massachusetts and nationally, making it increasingly difficult for many hardworking parents to make ends meet and provide for their children. The state earned income tax credit (EITC) program helps push back against this troubling trend, providing a meaningful boost to the after-tax earnings of low-income working families. When we reward work with policies like the EITC, families benefit over the long-term: children grow up healthier and do better in school, and parents enjoy greater economic security throughout their working years and into retirement.

A strong state EITC, particularly when coupled with a strong minimum wage, moves us closer to being the “commonwealth” declared in our state name. (For more on the interactions between minimum wage and earned income tax credit policies, see MassBudget’s factsheet, Rewarding Work.)

THE EITC DELIVERS LARGEST BENEFITS TO FAMILIES WITH CHILDREN

The state Earned Income Tax Credit (EITC) is a refundable tax break provided by the Commonwealth to lower-income workers in order to increase the after-tax rewards to work. It is available only to tax filers with earned income and provides benefits primarily to workers with children (to learn more about this and other programs affecting Massachusetts children, see MassBudget’s Children’s Budget).

The Massachusetts EITC operates under the same eligibility rules as the federal EITC, with the state credit value calculated as a straight percentage of the federal EITC amount claimed by the tax filer (also called the “match rate”). A tax filer's federal EITC eligibility and credit value depend on marital status, the amount of income the filer earned during the tax year, and the number of dependent children. As of January 1st, 2016, the match rate in Massachusetts will rise from 15 percent to 23 percent of the federal credit.

The largest credits are provided to families with three or more children earning between approximately $14,000 and $24,000 a year.1 The value of the credit declines slowly as income rises, and disappears entirely for families earning more than about $53,000.2 Far smaller credits are available to very low-income filers who do not have children.3 The value of the credit is applied toward the filer's tax liability and any amount that exceeds taxes owed is refunded through direct payment to the filer.

The Earned Income Tax Credit leads to a variety of benefits for parents and children, according to a large body of research.

By providing tax credits to people currently in the workforce, the EITC increases employment and encourages people, especially single mothers, to work more hours.7 Not surprisingly, the EITC therefore boosts recipients’ long-term earnings and future Social Security retirement benefits. The EITC is likewise widely recognized as an extremely important tool in the fight aga1inst poverty. In combination with the federal Child Tax Credit (CTC), the federal EITC lifted some 10 million people out of poverty in 2014, 5 million of them children, and helped another 22 million people who nevertheless remained below the federal poverty level.8 In Massachusetts, these two federal tax credits combine to help keep roughly 76,000 Massachusetts kids out of poverty each year.9 Notably, on December 18, 2015, with bi-partisan support from Congress, President Obama signed into law H.R. 2029,10 a budget bill that includes language making permanent several extensions to the federal EITC and CTC that otherwise were set to expire in 2017 (for more details, see this CBPP report).11

Research compiled by the Center on Budget and Policy Priorities (CBPP) shows that because the earnings boost affects families in a variety of ways, the EITC has benefits throughout the life-cycle. Specifically, the EITC:12

A stronger state EITC could provide real, near-term help to hundreds of thousands of struggling families, while also laying the groundwork for a more prosperous Commonwealth down the road. Recognizing the benefits of a strong state EITC, at least ten other states offer significantly larger credits than does Massachusetts.13 Some states offer credits equal to 30, 40, or even 50 percent of a filer’s federal credit.14 Several of our neighboring states - including Vermont, Connecticut and New York -offer significantly larger credits than Massachusetts does.15

If, for example, Massachusetts were to increase its match rate to 30 percent, the maximum state credit available to a married couple with 3 or more children would rise from $1,442 (in 2016) to $1,881. For a married couple with two children, the maximum state credit would rise from $1,282 (in 2016) to $1,672. Other filers likewise would see meaningful increases. 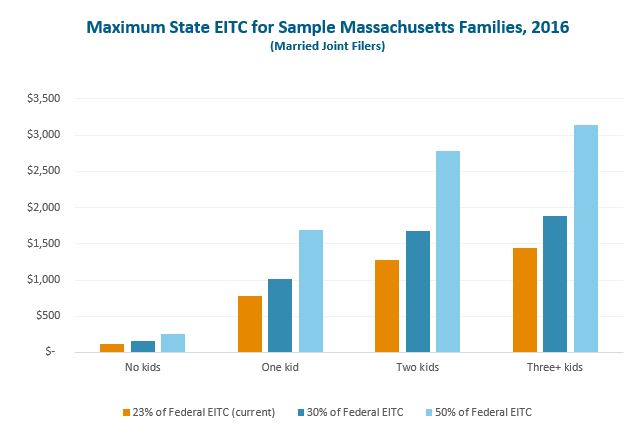 5Massachusetts Department of Revenue, Statistics of Income (data provided by request to MassBudget).

12All research in this section cited from Center on Budget and Policy Priorities, EITC Research Findings, March 2015: http://www.cbpp.org/cms/index.cfm?fa=view&id=3793