Building an Economy that Works for Everyone:
Implications of Privatization and the Pacheco Law

Economic Policy and the Goal of Broadly Shared Prosperity

Good economic policy aims to improve the economic well-being of working people and their families. For too many families, economic conditions have not been improving in recent years. While wages grew in lock step with productivity growth in the twenty-five years after World War II, we have seen a troubling change since the 1970s: economic growth is no longer leading to wage growth for most workers. The challenge for government is to identify economic policies that can restore the connection between economic growth and wage growth. 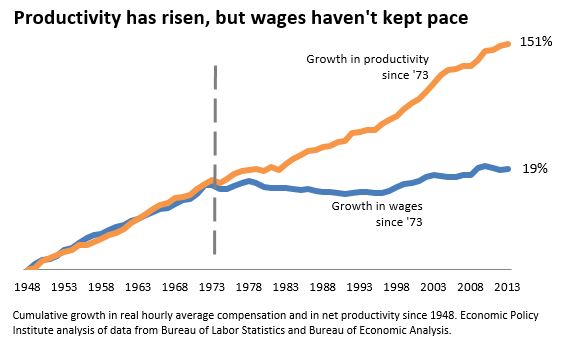 While most of the policies that could restore broad based wage growth would need to be implemented at the national level,1 there are some things that state governments can do to raise wages, improve the economic security of working people, and expand opportunity for all of our children. One set of strategies states can pursue is to expand access to high quality education and workforce training. By making sure that kids from all communities receive quality early education and care, attend highly effective public schools, and have access to affordable higher education, we can make sure that all of our people have the opportunity to reach their full potential – and that strengthens our economy. We can also set basic labor standards, like minimum wage laws, that make it possible for everyone who works hard to be able to earn enough to pay for basic necessities.

Another way states can help slow or reverse the downward spiral of wages is by being good employers that pay decent wages, and by requiring the same of those with whom the state does business. At the least, a state can follow the simple principle: first, do no harm. State governments can avoid policies that have the effect of driving down wages for working people.

When public services are privatized there is always a danger that private interests will eclipse public interests. Yet the privatization of government services can be effective when it allows those services to be delivered more efficiently and with the same or better quality. Getting the details right matters. It is important to distinguish between reducing costs by improving efficiency and reducing costs by cutting wages and benefits. Finding better ways of delivering services is good for everyone. Cutting wages, on the other hand, reduces the number good jobs that help working people to be able to make ends meet and boost the economy by buying goods and services their families need. Such wage cuts can harm working people directly and contribute to the continuing decline of wages across the economy. The policy challenge is to set guidelines for privatization that support improved efficiency and don’t drive down wages.

The law requires several steps be taken before a public service can be privatized (detailed in Section 54 of Chapter 7 of the General Laws):

The agency then solicits bids and can privatize the services if the State Auditor finds that the agency has demonstrated that the privatization will allow it to provide the same quality of services at a lower cost, consistent with the requirements above.

There has been significant debate recently about whether this law regulating privatization should be suspended, reformed, or repealed. That debate raises some big picture questions about the goals of state economic policy: do we as a Commonwealth want to authorize privatization strategies that reduce costs by reducing the wages of working people? It also raises questions about the details: if we do want to regulate privatization to ensure that such efforts achieve public purposes, what is the most effective way to do so?

Besides addressing economic policy issues, effective regulations can also reduce the likelihood of costly privatization mistakes and increase the likelihood that projects will be done properly. As supporters of privatization have explained, “Done properly, privatization can save taxpayers money, shift risk to private contractors and provide access to better technology or other capabilities that government lacks.2 Those who have looked at privatization efforts across the country have found that there are also significant dangers when governments fail to examine costs and benefits before privatizing services.3 In Massachusetts and elsewhere there have been successful privatizations. Regulations can support those efforts while guarding against harms.

In jurisdictions without adequate regulations there have been disappointing cases of privatizations that ended up being very costly. One of the most notorious examples was the CityTime project that aimed to improve New York City’s payroll system. Over a number of years the budget grew from $73 million to almost $700 million. This is perhaps a worst case example as it became what the US attorney described as “a fraudsters’ field day that lasted seven years.” The private contractor, pursuant to an agreement with the federal prosecutors, ultimately agreed to reimburse the city close to 80 percent of the money it spent on the project (for more detail see HERE).

In the wake of the scandal, good government advocates described lessons from the experience:

“CityTime is an example of how an allegiance to the notion that outside people are always better can be faulty,” said Susan Lerner, the executive director of Common Cause New York, who added that the Bloomberg administration had been overly eager to outsource projects to high-priced contractors rather than handle them in house."4

After the incident, the City Council enacted a measure requiring the city government to provide a cost-benefit analysis before outsourcing certain city projects.5

Ultimately the challenge faced by a state government is to determine how best to regulate the privatization of services to serve the long term interest of our people and our state economy.

1These include reforms of our fiscal, monetary, trade, and labor law policies that would aim at reestablishing the principle that as the economy grows and becomes more productive, and we produce more value for each hour of work, that wage growth should reflect those productivity gains. http://www.epi.org/publication/how-to-raise-wages-policies-that-work-and-policies-that-dont/