While hard work is considered the ticket to a middle-class life, many full-time workers across the Commonwealth struggle to support themselves and their families. In an attempt to increase economic security, Massachusetts phased in an increase in the state’s minimum wage to $11 an hour in 2017. This is a significant increase, but a minimum wage worker who works full-time at 40 hours a week for 52 weeks a year would still only earn about $22,880 per year.

In light of this growing national trend and statewide attention to increasing the minimum wage to $15 an hour, this brief looks at the state and local impact of a $15 minimum wage if it were phased in at a rate of $1 per year from 2019 until 2022 - the same way that the Commonwealth increased the minimum wage from $8 to $11.

Projections show that increasing the minimum wage to $15 by 2022 would raise the wages of roughly 943,000 workers or 29 percent of our workforce statewide. Of these affected workers, 90 percent are adults (over 20 years old), 56 percent are women, and 55 percent work full-time.

Increasing the minimum wage to $15 by 2022 is also projected to raise the wages of 24 percent of all working parents. And 26 percent of all kids in the Commonwealth live in households that would benefit from the increase.

Increasing the minimum wage to $15 an hour would raise the earnings of significant shares of workers from both low- and middle-income families. Minimum wage increases affect workers both directly, when the new minimum is higher than workers’ current wage, and indirectly, when workers’ wages at the time of the increase are a little above the new minimum and are pushed up by spillover or “ripple” effects as a result of employers maintaining some progression in their internal pay scales.4 For instance, 60 percent of workers with family incomes below $15,000 would get a raise (46 percent directly and 14 percent indirectly) as would over one-third of workers with family incomes between $50,000 and $75,000 (23 percent directly and 13 percent indirectly). While it may be surprising that so many middle-income families would benefit from a $15 minimum wage, there are many two-parent families with incomes between $50,000 and $75,000, where one parent is making at or about the minimum wage and the other is making a little bit more. Raising the minimum wage to $15 would raise the incomes of these families as well as significant numbers of low-income households.

The table below shows the portion of wage earners and the total number of workers by region who would be affected directly or indirectly by an increase by 2022 in the minimum wage to $15 per hour. Directly affected workers are those with wages below $15 who would receive a pay increase. Indirectly affected workers are those who earn slightly above $15 whose wages would increase somewhat as pay scales rise in response to the minimum wage increase.

Specifically, the table shows that workers in every region of the state would be affected by an increase in the minimum wage. For example, in Gateway Cities like Lawrence, Haverhill, Methuen, and Worcester, about 40 percent of workers are estimated to see their wages rise if the minimum wage is increased to $15 per hour. Overall, projections show that at least 15 percent of workers in every region of Massachusetts would see their wages rise from a minimum wage increase. 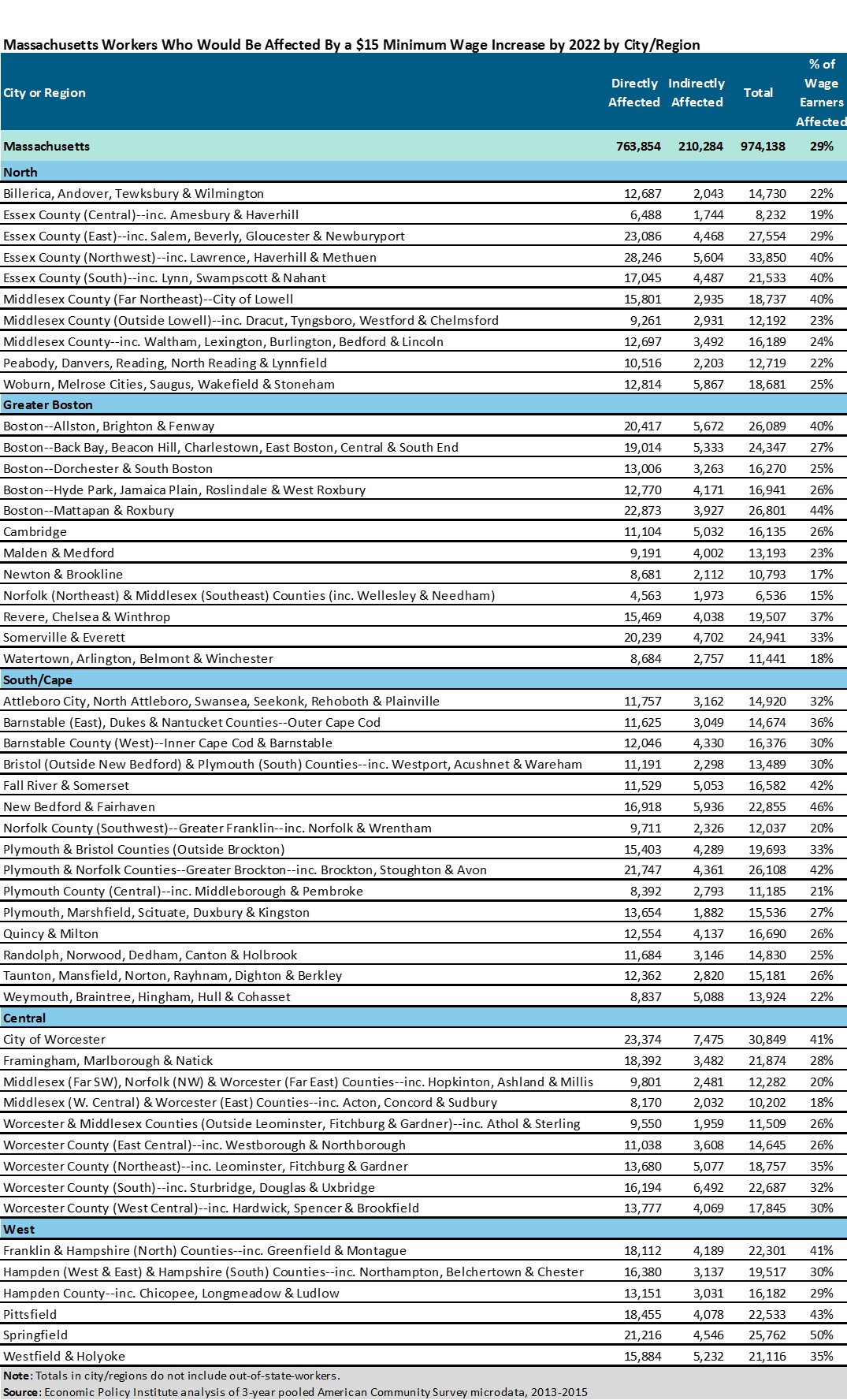 The local projections contained in this fact sheet come from a model developed by the Economic Policy Institute, a national, non-partisan research organization. The model uses data from 3-year pooled American Community Survey (ACS) microdata from the U.S. Census Bureau, 2013–2015, and looks at specific geographic areas called Public Use Microdata Areas (PUMAs)—areas that are large enough so that the sample size used in the survey is sufficient to produce reliable estimates. The total estimated workers figure is estimated from ACS respondents who were 16 years old or older, employed, but not self-employed, and for whom a valid hourly wage can be imputed from annual wage earnings, usual hours worked per week, and weeks worked in the previous year. All government workers are excluded except those that work for "local government.” Projections assume annual population growth and wage growth. Identification of workers is based on place of work and not residence.

3 The Boston Globe. (2017). Which hospitals pay the highest starting wages?

4 Estimates of workers affected by a minimum wage increase to $15 in Massachusetts include both directly and indirectly affected workers, unless otherwise noted. Labor economists have examined the issue of indirect wage effects of raising the minimum wage. For instance, Wicks-Lim finds that indirect effects typically result in wage increases for workers further up the wage ladder because employers want to maintain some progression in their internal pay scales. Also, Dube, Giuliano, and Leonard similarly find positive indirect wage effects for workers earning 15 percent above newly implemented minimum wages. The data on affected workers in this report comes from the Economic Policy Institute, and reflects the research of Wicks-Lim, Dube, et al. For further detail, see the methodological appendix in the Economic Policy Institute 2017 report “Raising the minimum wage to $15 by 2024 would lift wages for 41 million American workers."