In an effort to build a thriving state economy – one that delivers broadly shared prosperity for our businesses and workers - the Commonwealth invests in many different things: it offers high-quality education, supports job training, builds roads and operates public transit. The Commonwealth also provides tax breaks for businesses, typically with the goal of adding good jobs to the state economy (see MassBudget’s factsheet, “Business Tax Breaks in Massachusetts”). One such tax break is the state’s Film Tax Credit.

The film tax credit provides a significantly larger subsidy than most other special business tax breaks.  While we generally think of tax breaks as reducing the taxes a company owes, the film tax credit goes well beyond that.  It provides a tax subsidy equal to 25% of the total amount spent by motion picture companies in Massachusetts.  If, for example, Blockbuster Films has spent $10 million in Massachusetts in a given tax year, they would get a tax credit worth $2.5 million – even if they would have owed little or no taxes. The credit can be carried forward for up to five years, sold or cashed in (for a 90 percent refund from the Commonwealth). Using the example above, the “cash in option” could mean the Commonwealth writing Blockbuster Films a check for up to $2.25 million.

This is a substantially different structure from most other special business tax breaks. For example, the state’s Investment Tax Credit seeks to increase companies’ long-term capital investments in Massachusetts. It provides eligible companies (manufacturing, R&D, agriculture and commercial fishing companies) with a credit equal to 3 percent of the cost of depreciable real and tangible property located in Massachusetts.1 The Investment Tax Credit may be carried forward for up to three years. It is neither transferable nor refundable.

The total cost to the Commonwealth of the Film Tax Credit program is not capped. (Additionally, qualifying film production companies are entitled to an exemption from the state sales tax on all purchases made as part of the production process.)

MASSACHUSETTS SPENDS $80 MILLION A YEAR ON THE FILM TAX CREDIT

Studies of state film tax credits throughout the U.S. have repeatedly found that these credits do not “pay for themselves.”6 They do not generate anywhere near enough additional economic activity – in the form of wages and purchases – to produce new tax revenue that would cover the cost of the tax break program. DOR’s most recent annual report (2012) echoes this finding for Massachusetts: During the period from 2006 to 2012, during which the Commonwealth issued $411 million in credits, the increase in film production activity produced a total of $55.1 million in new tax and non-tax revenue, statewide.7 In other words, for every dollar of tax revenue forgone, the Film Tax Credit delivered thirteen cents of new revenue to the Commonwealth. 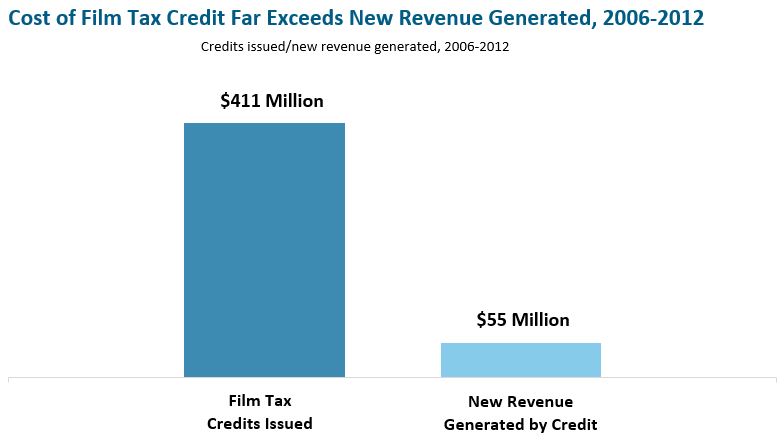 In their 2012 report, DOR estimates that, from 2006 through 2012, the Film Tax Credit created a net total of 5,530 jobs.8 This “net” figure is the combination of the new jobs created by the credit minus the jobs lost because the Commonwealth, due to the cost of the credit, had less revenue available to spend in other areas, which also involve hiring people, including educating children, policing neighborhoods, staffing libraries, and building roads and bridges. Importantly, only 3,000 of these new net jobs went to Massachusetts residents. This seven-year total averages out to about 430 net new jobs for residents, statewide, in each year. With a net state cost for the program of $357 million over this same period, DOR puts the cost per net resident-job at roughly $119,000.9 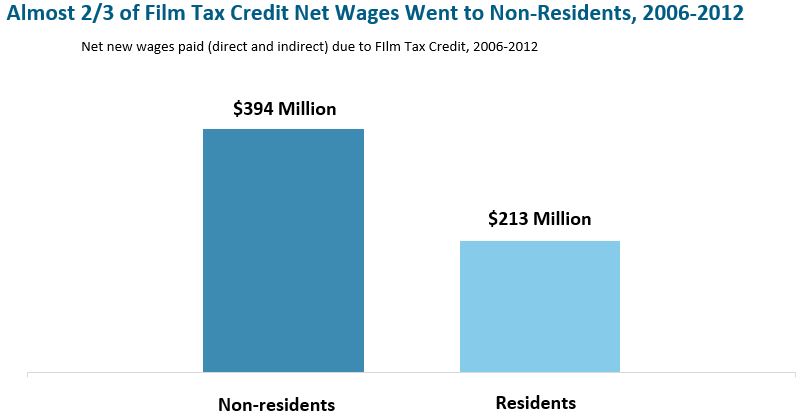 Since its inception in 2006, Massachusetts’s Film Tax Credit has cost the Commonwealth well over half a billion dollars in forgone tax revenue. The return on this substantial investment has been the creation of about 430 net jobs each year for Massachusetts residents in (or related to) an industry that provides between 5,000 and 6,000 total jobs in the state. On average, the Commonwealth has paid out roughly $119,000 in tax credits for each of these net, new resident-jobs; the jobs themselves, meanwhile, have delivered about $70,000 a year in wages to the typical worker.11 Analyses performed by think tanks across the political spectrum have singled out film tax credits as a particularly costly and ineffective way for states to pursue long-term economic development.12 As the Center on Budget and Policy Priorities summarizes, “In the harsh light of reality, film subsidies offer little bang for the buck.”13 The Tax Foundation meanwhile, observes that film tax credits, “fail to live up to their promises to encourage economic growth and to raise tax revenue.”14

Not surprisingly then, other states have begun to reduce, suspend or altogether eliminate their film tax credit programs.15 There is no evidence that the Massachusetts Film Tax Credit can develop a substantial and permanent film production industry in the state, one that is not dependent on large tax subsidies to survive. What is certain is that the high cost of the Massachusetts Film Tax Credit limits our ability to invest in other programs with proven track records of helping to build more broadly-shared prosperity in Massachusetts, including apprenticeship and workforce training programs, quality childcare supports, and the states’ Earned Income Tax Credit.

5 This total includes estimates for both individual and corporate income tax losses. It does not include revenue losses resulting from the sales tax exemption provided to film production companies. DOR does not provide an estimate for these losses.

9The net cost figure includes both the value of the credits provided by the Commonwealth and the new revenue received by the Commonwealth due to increased film production activity in the state.
Department of Revenue, Massachusetts Film Tax Credit Incentive Report 2012 (Table 5, pg. 16): http://www.mass.gov/dor/docs/dor/news/reportcalendaryear2012.pdf

13 See Center on Budget and Policy Priorities, “Not Much Bang for Too Many Bucks”, December 2010: http://www.cbpp.org/cms/index.cfm?fa=view&id=3326