The Effects of Skewed Growth on Household Incomes


Throughout the 1950s, 1960s, and much of the 1970s, as the U.S. economy grew, incomes increased steadily, and at similar rates, for low, middle, and high income households.1 Starting in the late 1970s, however, income growth slowed dramatically for most Americans, except those with the very highest incomes. A number of factors led to this change including a sharp decline in the level of unionization, the erosion of the real value of the minimum wage, and changes in trade and macroeconomic policies.2&3 This shift in income growth patterns occurred both at the national level and here in Massachusetts. In recent decades, all 50 states have seen a rise in the share of income going to the top 1 percent of households.4 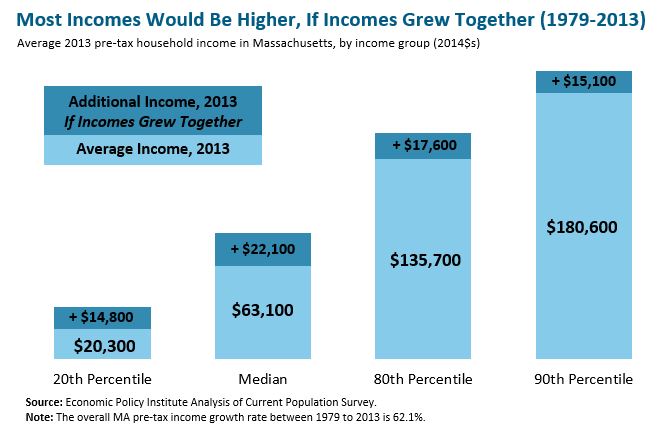 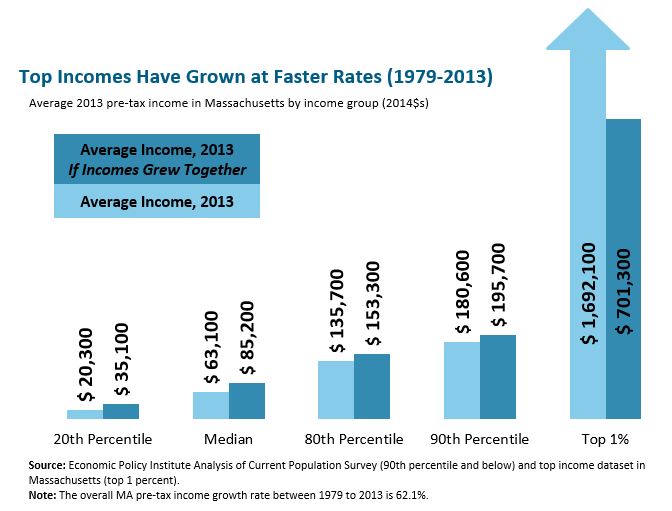 THE FULL BENEFITS OF ECONOMIC GROWTH ARE NOT REACHING MOST FAMILIES

The chart below displays a snapshot of the years 1979 and 2013. The circles represent the total personal income of all people in Massachusetts in each of those years and the distribution of that income between the highest income 1 percent of the population and everyone else. In 1979, the bottom 99 percent of households received about 90 percent of the income in the state. By 2013, this group received a much smaller share of the overall income in the state – just 77 percent. In Massachusetts, the incomes of the top 1 percent are, on average, 30 times the average income of those in the bottom 99 percent. In 1979, the top 1 percent had incomes about 10 times larger than the average household did in the bottom 99 percent. 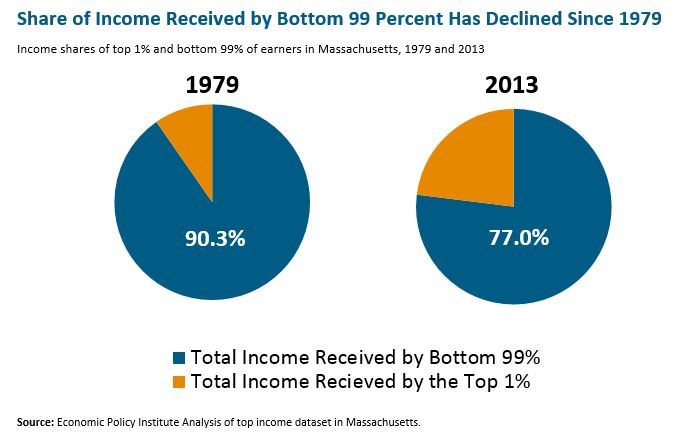 As those with high incomes continue to benefit the most from economic growth, they also pay a smaller share of their income in state and local taxes than the rest of the taxpayers in the Commonwealth. If our highest income households were contributing at the same average level as the bottom 99 percent of taxpayers, this would generate over $2 billion per year in additional tax revenue. This revenue could be directed toward smart investments that would expand opportunity for Massachusetts families and strengthen our state economy. See MassBudget’s Examining Tax Fairness and Funding Improvements for Schools, Roads, and Public Transit with Tax Reforms that Improve Fairness factsheets. 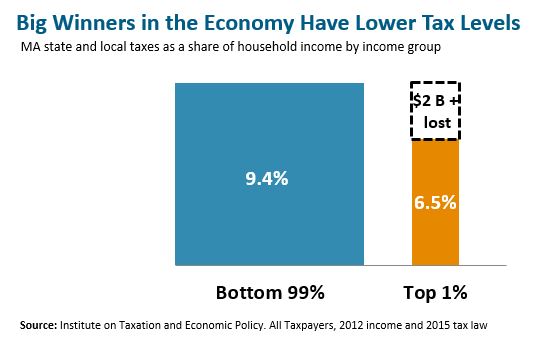 While many of the deep solutions for raising the wages and income of working people would need to be implemented at the national level, states like Massachusetts can continue adopting policies that will help strengthen our state economy while also reducing extreme inequality. Our Commonwealth already has taken important steps to improve the economic lives of working people and families. In recent years, Massachusetts has passed Earned Paid Sick Time legislation, adopted a phased increase of the state minimum wage to $11 an hour by 2017, and expanded the state Earned Income Tax Credit (EITC), boosting after-tax incomes for Massachusetts’ working families. But, there is more we can do to raise wages, improve working conditions, and expand educational and job opportunities for people in every community of our Commonwealth.

5Technical Note 1: The income data used throughout is derived from two separate datasets. Data for the 20th percentile, median, 80th and 90th percentile comes from the U.S. Census Current Population Survey, which provides accurate income data on most households, but is not well suited to track trends among the highest-income households, especially the top 1 percent. Therefore, top income trends in this paper draw on the Economic Policy Institute’s Price/Sommeiller top income dataset, which in turn offers estimates using data from the U.S. Internal Revenue Service (IRS) SOI Tax Stats on tax filer units. When people file taxes with the IRS, they do so on behalf of their tax unit, which may be an individual or a married couple that file together. In most, but not all, cases a household and tax unit are one and the same. To make this factsheet more user-friendly, the terms households, taxpayers, and families are used interchangeably. The second chart uses the two data sources. It shows what incomes were for the 20th percentile, median, 80th percentile, 90th percentile, and the top 1% in 2013 and compares that to what they would have been if income at each level had grown at the same rate (the rate of average income growth) since 1979. This average rate (62.1%) comes from the SOI tax stats. Lastly, in an effort to reduce their tax liabilities in anticipation of higher top marginal federal tax rates set to take effect in 2013, many high income earners shifted income from 2013 into 2012 (by selling stocks and other assets). Therefore, the data presented here slightly underrepresent top incomes in 2013.

6 Technical Note 2: The estimate of what median household income in Massachusetts would be today differs in this paper from the estimate in another recent MassBudget paper, “Income Growth and Gateway Cities: What Happened, and Is There a Path Back to Broadly Shared Prosperity?”, largely because this paper looks at total income growth by taxable unit whereas the “Income Growth and Gateway Cities” paper looks at total income growth by household. Our analysis here is statewide and based off of the Economic Policy Institute’s Price/Sommeiller top income dataset, which uses taxable units. The other paper uses households because it simulates household income changes at the city level.