The Single Sales Factor Tax Break:
Has It Worked?


The Governor’s budget is expected to propose extending a special tax break for multi-state corporations called “Single Sales Factor.” Proponents of this tax change claimed it would boost manufacturing jobs when it was introduced in the 1990s. Indeed, when Single Sales Factor was enacted, the head of the Associated Industries of Massachusetts proclaimed, “By adopting the single sales [factor] apportionment formula for Massachusetts manufacturers, the Legislature today took a bold step towards restoring Massachusetts as a manufacturing state.” 1 But since enacting this tax break, Massachusetts continued to lose manufacturing jobs at a rapid pace and now has 40 percent fewer such jobs than when the tax cut was enacted. Studies of states across the country have found that states that have enacted this expensive tax break have lost manufacturing jobs at about the same rate as those that have not.

What is “Single Sales Factor”?

State laws across the country have traditionally taxed the profits of multi-state companies based on the portion of business activity that takes place in each state. A state’s taxable income is apportioned based on an equal weighting of the relative amount of a company’s property, payroll, and sales. The more any of these factors occur in a state, the higher percentage of a company’s national profits will be subject to taxation by that state.

“Single Sales Factor” or “the single sales tax formula” is a rule that changes the method for determining what portion of multi-state companies’ profits should be considered state income for tax purposes. Under this rule, companies pay taxes on a percent of their profits based only on the sales they make in the state, regardless of how much manufacturing, research, design, marketing, or other activities occur in the state. The rule provides no benefit to companies that don’t make sales in other states.

The Governor’s budget reportedly will propose phasing in the Single Sales Factor to all multi-state companies over four years, at which point the Governor projects there will be a $67 million annual loss of revenue.2

It is a positive feature of the Massachusetts economy that companies have access to a skilled workforce, safe communities, clusters of high-tech firms, and a dependable legal system. State corporate taxes and tax breaks are a minor consideration on where companies locate because these other factors matter so much more.3 As Paul O’Neill, former executive at Alcoa and President George W.  Bush’s Treasury Secretary said: “I never made an investment decision based on the tax code….  If you are giving money away I will take it.  If you want to give me inducements for something I am going to do anyway, I will take it.  But good business people do not do things because of inducements.4 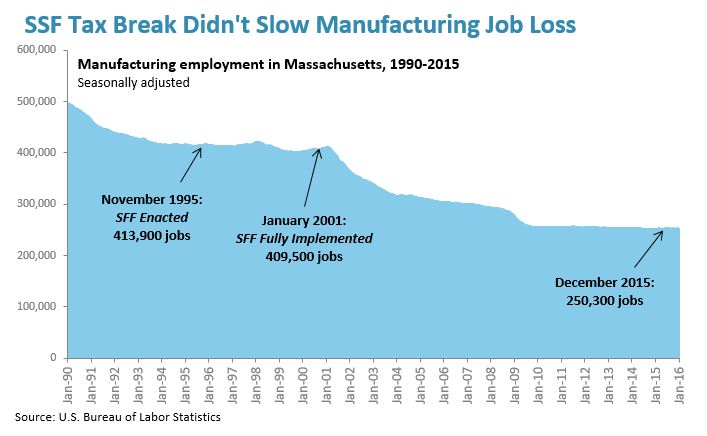 In the Massachusetts debate leading up to passage of the Single Sales Factor in the 1990s, proponents claimed the tax would provide a shot in the arm to sagging manufacturing employment.  That didn’t work out well. Only four states lost a larger percentage of their manufacturing jobs between 2000 and 2014.6

The point isn’t that the Single Sales Factor drove away manufacturing jobs. It is that there are no discernable positive effects for the economy from this tax break. A recent study by economist David Merriman found that states that put more weight on sales in apportioning corporate taxes do not experience better manufacturing employment results.7 He found that older research based on the 1978 to 1994 period, often cited by proponents of Single Sales Factor, had computational errors that, once corrected for, leave no significant effect on job creation. Updating the earlier study with data up through 2010 also showed no significant effect on jobs from Single Sales Factor.

Evidence from Massachusetts and the rest of the country doesn’t support the idea that Single Sales Factor will boost jobs.  Thus, this corporate tax break is likely a very inefficient way to spend $67 million dollars annually on economic development.

4Hearing before the Committee on Finance, United State Senate, 107th Congress, 1st Session, on the Anticipated Nomination of Paul O’Neill to Be Secretary of the Treasury, January 17, 2001, S. Hrg. 107-5.