In healthy communities, children are more likely to be born healthy and can grow up to be healthy adults. When people are healthy they are better able to reach their full potential and make lasting contributions to society. Health is influenced by a variety of complex factors, such as where one lives, access to healthy foods, and affordability of health care. Policies that address the ability of workers to care for family members, like Paid Family and Medical Leave (PFML), can also shape and influence health. PFML allows workers to take paid time off to care for themselves, for a new child, or for a family member with a serious illness or injury. Access to PFML has the potential to have both short-term and longer-term health benefits for infants and mothers, and can reduce economic and gender gaps. This brief focuses on the health implications.

Impacts on maternal and child health

Public policies, like paid family and medical leave, can improve maternal and child health outcomes which in turn improve the health of families and communities. Paid family and medical leave allows parents to start making healthy decisions before a child is born, such as expanding access to prenatal or other types of medical care. Paid leave also improves maternal physical and mental health by allowing mothers enough time to recover from child birth, lowering the rates of re-hospitalization. The impacts of paid leave on maternal and child health are discussed below.

Policies like job-protected paid leave can reduce physical and financial stresses, which can cause pre-mature birth.1 For instance, paid family and medical leave can reduce negative effects of particular aspects of work for pregnant women mainly seen in lower-wage occupations, such as prolonged standing, shift or night work, and physically demanding work, which are also associated with pre-mature delivery.2 Working longer into pregnancy has been linked to delivery complications. This is particularly important to mothers in low-wage jobs as they are less likely to be able to afford to take unpaid time off and more likely to have more physically demanding jobs.3

A study examining the aggregate effects of parental leave on child health in 18 countries, including the U.S., found that when job-protected paid leave is available, infant mortality declines an average of 2.5 percent.4 For example, in 2016, the infant mortality rate in Massachusetts was 3.9 (deaths per 1,000 live births)5 and with access to paid leave this rate could be reduced to 3.8 (or seven deaths per year). Lack of antenatal leave (leave before birth) has been associated with a three-fold increase in risk in preterm delivery.6 (The U.S. Centers for Disease Control and Prevention indicate that infant mortality rate is largely associated with low birthweights.7) Taking leave before the end of pregnancy benefits a child’s birthweight at almost the same magnitude as the harms seen in smoking during pregnancy.8

Access to paid family and medical leave may benefit children’s health through increased rates and duration of breastfeeding, as mothers are more likely to breastfeed when they take leave. Breastfeeding provides numerous short-term and long-term health benefits to babies, such as reducing infections, and lowering risks of asthma, childhood leukemia, and obesity.9 Breastfeeding also provides long-term health benefits to mothers by lowering risks of ovarian cancer, certain types of breast cancer, and Type 2 diabetes.10 One study found that the rates of breastfeeding increased for working mothers in California after the PFML law came into effect. Before the law, 44 percent of mothers were breastfeeding in the first three months and 28 percent at six months. After the law came into effect, these rates increased to 60 percent and 45 percent, respectively.11 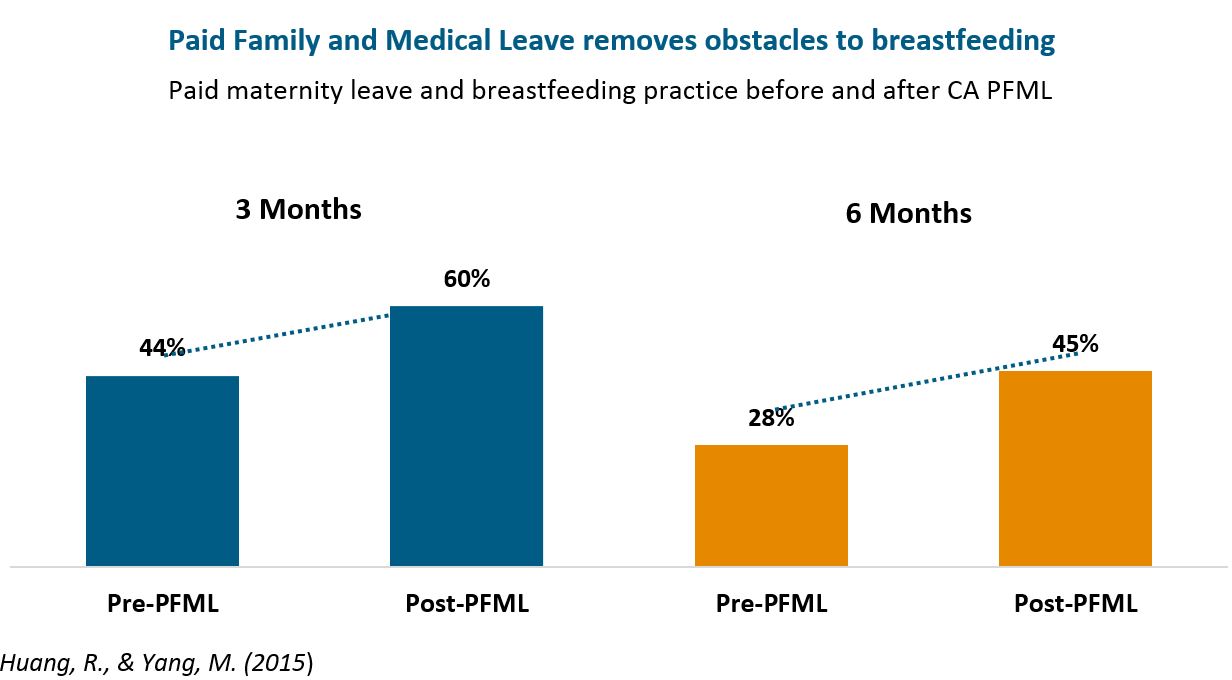 
When parents are able to take paid leave after birth or adoption, children benefit with better physical, cognitive, and behavioral outcomes.12 For instance, research suggests that maternity leave can help parents make sure their children are properly immunized, as they are in better positions to monitor their children's health and to take their children to the doctor.13 One study that examined the relationship of maternity leave and vaccinations of 185 United Nations member countries found that children are 25.3 percent and 22.2 percent more likely to get their measles and polio vaccines, respectively, when mothers have access to policies that pay them their full salary while on parental leave (after controlling for per capita GDP, health care expenditures, and societal factors).14

Paid family and medical leave policies provide parents with time to bond with and care for a new child as well as to recover from childbirth. When families are able to build strong relationships from the start, children are more likely to have healthy social and emotional outcomes. They are also less likely to have behavioral and adjustment problems as adolescents and adults.15 In California, which has the longest standing statewide PFML law in the country, new mothers took around three weeks of maternity leave before the PFML law was implemented.16 After the program was enacted, use of maternity leave increased to six or seven weeks, on average.17 Under the law, fathers’ bonding time with newborns increased by 46 percent (or two to three extra days).18 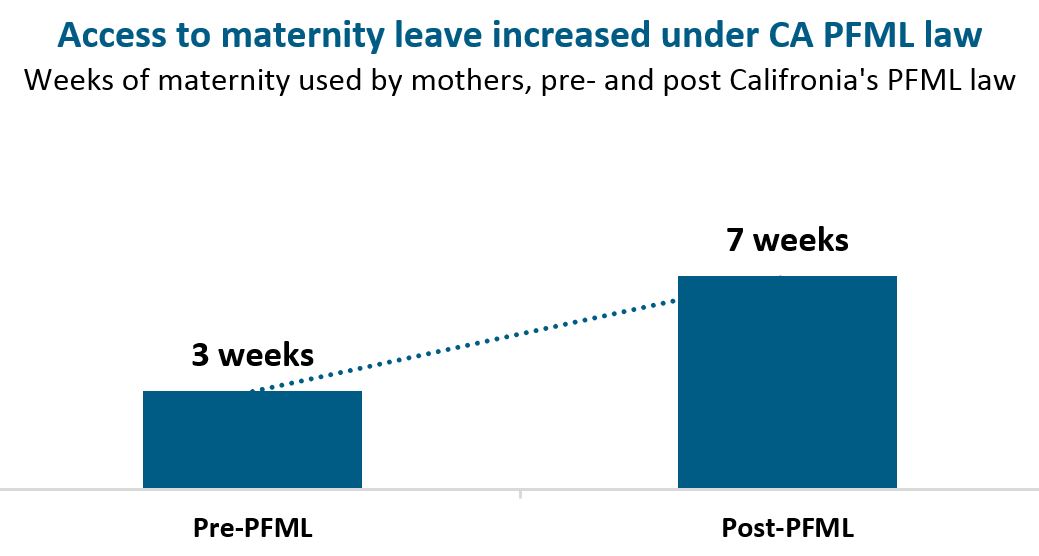 In addition to the obstacles that most women face in taking leave, the data suggest that Black women are even less likely than White women to be able to take adequate leave. The California study found that, before the PFML law, Black women averaged just one week of maternity leave compared with four weeks taken by non-Hispanic/Latinx White mothers.19 Several years after implementation, both groups averaged seven weeks of leave.

Recovery of mothers and children:

For children, studies have found that having parents present has been linked to faster recovery from both inpatient and outpatient procedures, and that parents with paid leave are significantly more likely to be able to care for sick children themselves.20 For mothers who have had either vaginal or cesarean deliveries, physiological changes, anemia, and increased risk of blood clots typically resolve within four to six weeks postpartum.21 Recovery from cesarean delivery (c-section) is longer, and activity restrictions are recommended for eight weeks after delivery.22

Having access to job-protected, paid leave after the birth of a child can improve the mental health of mothers in the short-term and the long-term. For instance, in one study, women who took at least eight weeks of maternity leave reported fewer depressive symptoms, a reduction in severe depression, and improvement in their overall mental health.23 Another study found that maternity leave is associated with reduction of the long-term consequences of stress and mental health disorders associated with the experience of childbirth. Specifically, women aged 50 or older who moved from a maternity leave program with limited coverage to one with more comprehensive coverage24 at the birth of a first child showed reduced signs of depression by 14 percent.25

Social and economic factors, such as family and social support, contribute to health. Paid family and medical leave allows family members to support one another, particularly elders. As the elder population ages, the pressure on adult children to care for their aging parents will continue to grow. According to the Bureau of Labor Statistics, about one in six Americans (16 percent) provide unpaid care to an elder (someone aged 65 and older).26 An estimated 14 percent of U.S. adults, 34.2 million, provide unpaid care for a person 50 and older, most of whom are parents or parents-in-law.27

The elder population is projected to double by 2050,28 making policies like paid family and medical leave significant for the health (financially and medically) of elders and their caregivers. For instance, elderly adults have 2.5- to 4.6-fold higher risk for hospitalization than nonelderly adults.29 While the duration of these hospital stays is about six days on average, recovery is often lengthy as only 65 percent of elderly adults recover to functional status by the time they are discharged.30

Elder health outcomes (morbidity and mortality) improve with social engagement, and the elderly have better disease and physical health outcomes when loved ones participate in their care.31 In California, one study found that the state’s paid family and medical leave program reduced nursing home usage by about 0.65 percentage points, which represents an 11 percent relative decline in elderly nursing home utilization.32 Therefore, based on California’s reduction rate, Massachusetts could experience a 15.3 percent reduction in elderly nursing home utilization under a statewide paid family leave policy.33

9 Office on Women’s Health, U.S. Department of Health and Human Services. Why breastfeeding is important.

10 Office on Women’s Health, U.S. Department of Health and Human Services. Why breastfeeding is important.

24 Overall, the authors link data for women aged 50 and above from eight countries in the Survey of Health, Ageing and Retirement in Europe (SHARE) to data on maternity leave legislation from 1960 to 2010. These countries have varying maternity leave policies, particularly in weeks offered and wage replacements. In order to determine the robustness of a maternity leave policy, the authors multiply the number of weeks by the percentage of past wages. This creates a summary indicator of the generosity of maternity leave benefits that indicates the number of weeks of full wage leave (FWW) provided to mothers around the period of childbirth in each country from 1960 to 2010. Avendano, M., Berkman, L. F., Brugiavini, A., & Pasini, G. (2015). The long-run effect of maternity leave benefits on mental health: evidence from European countries. Social Science & Medicine, 132, 45-53. Page 9.

29 World Policy Analysis Center. (2018). A Review of the Evidence on the Length of Paid Family and Medical Leave. Page 4.