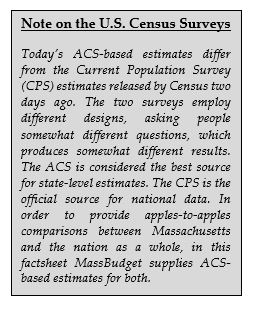 With the release this week of new American Community Survey (ACS) data from the U.S. Census Bureau, it is clear that working families nationwide and here in Massachusetts made some important gains from 2014 to 2015. The overall poverty rate declined meaningfully in the U.S., though there was no statistically significant drop, however, in the Massachusetts poverty rate. Median incomes saw strong growth in 2015 in the U.S. as a whole and somewhat more modest growth here in Massachusetts. Falling unemployment rates and tightening labor markets are primary drivers of these positive trends.

While much of this is welcome news, the data also show that poverty rates remain well above pre-recession levels (2007) and median incomes remain below pre-recession peaks. Not everyone is sharing fully in the benefits of a growing economy. Policies that further tighten the labor market can help address this problem. Revealing the effectiveness of national and state income and work support programs, the ACS data also point the way toward other policy improvements that can lead to broadly shared prosperity.

The new ACS data on poverty present a mixed picture. For Massachusetts, the official overall poverty rate (as opposed to the Supplemental Poverty Measure, see further discussion below) stood at 11.5 percent in 2015, not a statistically significant decrease from the 2014 rate of 11.6 percent–in other words, it is not possible to distinguish the 2015 rate from the rate in 2014.  In 2015 more than 1 in every 9 people in Massachusetts lived below the federal poverty threshold (which is roughly $24,000/year for a family of four). Only 12 other states had lower overall poverty rates in 2015. By contrast, the new ACS data do show a statistically significant decline in poverty for the U.S. as a whole, falling to 14.7 percent for 2015 from a rate of 15.5 percent in 2014. In the U.S., close to 1 in every 7 people lived below the poverty threshold in 2015.

While the 2015 drop in the U.S. rate is welcome news, unfortunately, despite years of economic growth in the U.S. and in MA, poverty has remained stubbornly high in the aftermath of the Great Recession. Both the Massachusetts and U.S. 2015 rates are well above their pre-recession levels (see chart above). For too many people, the benefits of economic growth are not translating into meaningful improvements in their standard of living. (Learn more in the Introduction and Poverty sections of MassBudget’s State of Working Massachusetts report.)

Another big story in the new data is the degree to which federal and state policies help individuals and families pay for basic necessities. In addition to the official poverty measure, the Census Bureau has developed an alternative measure of poverty called the Supplemental Poverty Measure (SPM). Unlike the official measure, the SPM accounts for differences in the cost of living among regions; includes a variety of everyday expenses (like clothing, housing and utilities); and factors in various forms of income support that are not included in the standard poverty measure (like SNAP “food stamps”, the Earned Income Tax Credit (EITC), the Child Tax Credit (CTC), and housing supports).

Overall, for the U.S., these income and work support programs cut the SPM poverty rate nearly in half, from 26.3 percent to 14.3 percent in 2015 (see the Center on Budget and Policy Priorities’ blogpost). These programs moved 38 million people above the poverty line, including 8 million children. 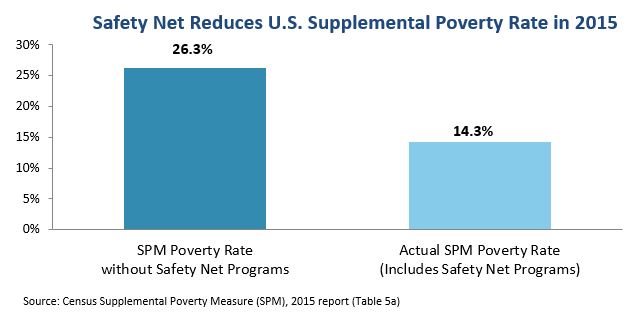 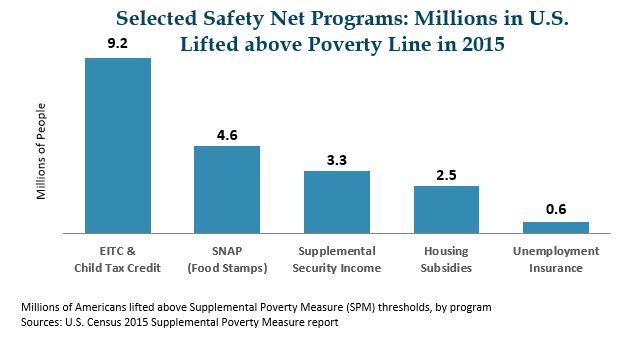 As in past years, Massachusetts is among the states with the highest median incomes in the country, ranking 7th in the new ACS data. This makes sense because Massachusetts has the best educated workforce in the country, and college and advanced degree holders as a group have higher wages and incomes than workers with only a high school degree. While strong median income growth is good news, these 2015 figures nevertheless are still below the highs they reached just prior to the onset of the Great Recession.

There are a number of policy options that could accelerate income gains for Massachusetts workers and reduce poverty. Some policy improvements will deliver measurable results only over the long-term; others can produce results in shortly after implementation. Options from both “buckets” can be pursued simultaneously. Over the long-term, we can increase access to higher education and quality pre-K through 12 schooling, as well as workforce training opportunities. In the short-term, the Commonwealth could implement policies that raise wages and improve the working conditions of working people. These policies include raising the minimum wage, providing workers with paid family leave, and further increasing the state earned income tax credit. (To learn more about other state tax code changes that can help fight poverty, see also the Institute on Taxation and Economic Policy’s new report.)

Similarly, there are policy improvements that can be made at the federal level. Many federal programs have a demonstrated track record of lifting people out of poverty and helping families build economic security. The Affordable Care Act greatly increased the number of people with health insurance (see MassBudget’s Health Coverage factsheet). As discussed above, the Earned Income Tax Credit, Child Tax Credit, nutritional support programs and other programs lift tens of millions of Americans above the poverty level each year. (For a state-by-state analysis of the effects of these programs see the Center on Budget and Policy Priorities’ report, The Safety Net’s Impact.) Improving and strengthening any of these programs would improve the lives of low and middle-income families in Massachusetts and throughout the U.S.