The Massachusetts Department of Transportation oversees and supports nearly 10,000 lane miles of roadway, over 5,000 bridges, and 36 airports.1 The MBTA is the nation’s fifth largest transit system, with 2,500 buses and trains2 carrying 1.3 million passenger trips per-day across 175 communities.3 The Commonwealth’s 15 Regional Transit Authorities operate an additional 1,400 vehicles across 231 communities.4

Where do the resources come from to operate this transportation system, and where is the money spent? The chart below shows state revenues and spending for transportation operations and debt service in Fiscal Year 2015, the most recent year for which comprehensive data is available. The width of each arrows represents the amount of dollars that flow from one source or activity to another. 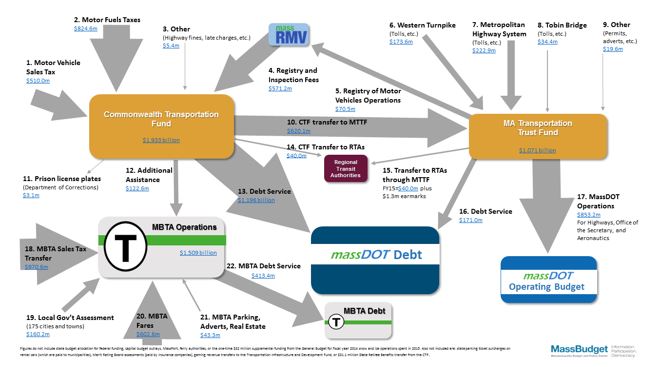 Most state transportation dollars in Massachusetts are automatically dedicated to transportation from designated revenue sources such as the tax on gasoline, car sales, registry fees, tolls, or a portion of the sales tax. The amount of investment available to meet transportation needs therefore depends on how quickly these sources increase over time and on decisions made through legislation or the budget process to dedicate different amounts of revenue or new revenue sources.

Building and maintaining infrastructure is long-term investment. The Commonwealth pays for long-term investments through issuing bonds to finance long-term capital investments.  In Fiscal Year 2015, the Department of Transportation and the MBTA spent a combined $1.78 billion on this debt service, as shown in the chart.

The chart doesn’t include federal funds, which help support those capital projects and vary annually based on the timing of federal grants and reimbursements. Nor does the chart display spending by local cities and towns.

In Fiscal Years 2016 and 2017 the structure of transportation spending flows has remained basically the same as in FY 2015. Instead of passing half of funding for the Regional Transit Authorities through the MTTF, in subsequent budgets these funds have come directly from the CTF to the authorities.