What Does the Federal Tax Law Mean for Massachusetts and How Might the Commonwealth Respond?

By Phineas Baxandall, January 22, 2018
What Does the Federal Tax Law Mean

Taxes at the state, local and federal levels are how we bring together resources to expand opportunity and ensure public well-being. Federal and state partners work together to support important programs for people of all income groups. Our contributions toward advancing public goals through taxes are based in part on our ability to pay.

The federal tax cuts will reduce the taxes paid by the highest-income one percent of the Massachusetts population by over $2.96 billion in 2019, the first year the cuts are fully in effect. If the people of Massachusetts determine that $2.96 billion could be better spent on investments in education and transportation, which could make our economy more productive and expand opportunity for our young people, the state could adjust our tax code in ways that would effectively redirect a portion of that $2.96 billion to those higher priority areas. That could be done by raising state income taxes for our highest-income taxpayers, who will be receiving large federal income tax cuts and benefitting from large federal corporate tax cuts.

What are the distributional effects of the federal tax law? 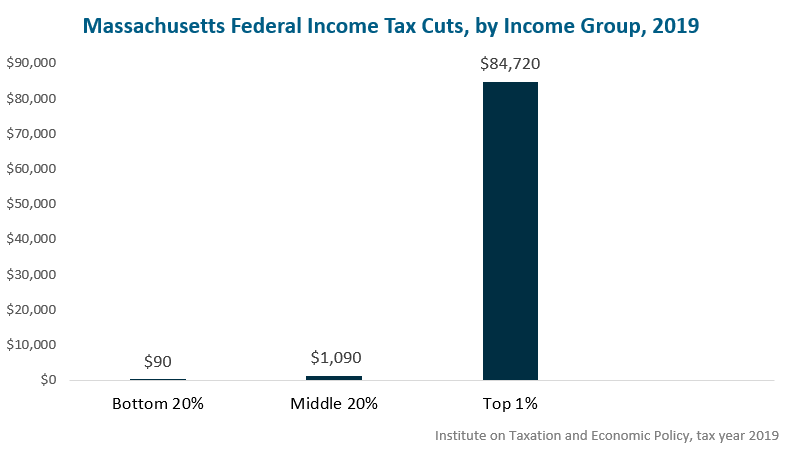 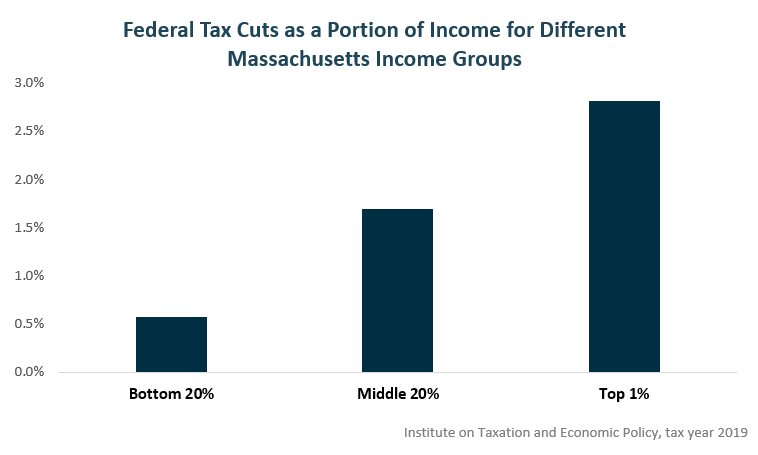 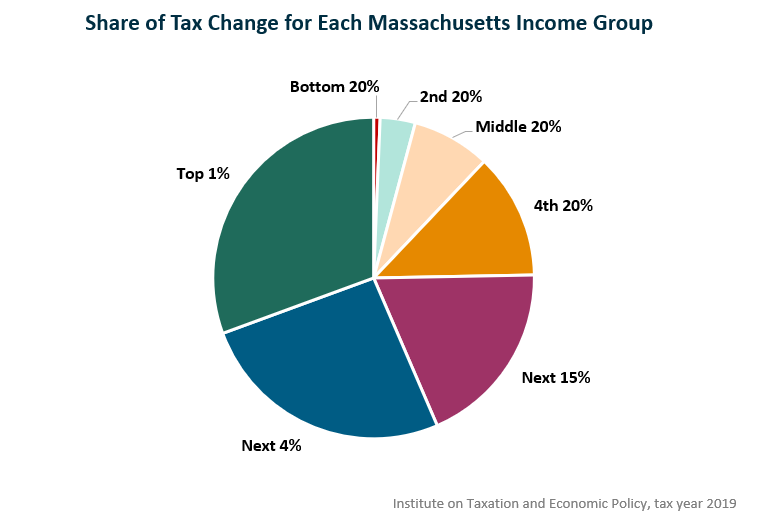 Households that earn over $1 million in a single year represent the upper portion of the top one percent of the income ladder. They would pay a four percent income surtax on income over the $1 million threshold under the Fair Share Amendment. The federal tax law will provide this group in Massachusetts with an estimated $2.58 billion combined tax cut in 2019. The new law limits tax filers’ deduction of their state and local tax (SALT) to no more than $10,000 in annual combined state and local taxes. For those with incomes over $1 million in a year, the cap on SALT deductions raises taxes by an amount that is less than half as large as the tax cut from other changes in the federal law. The average net effect of the SALT deduction limit and other tax changes for those with incomes over $1 million is a tax reduction of $95,800 in 2019. For those with incomes under $1 million in Massachusetts, the average federal tax change from the new tax law is a reduction of about $2,000 and would be about $500 larger if not for the change in SALT deductibility. 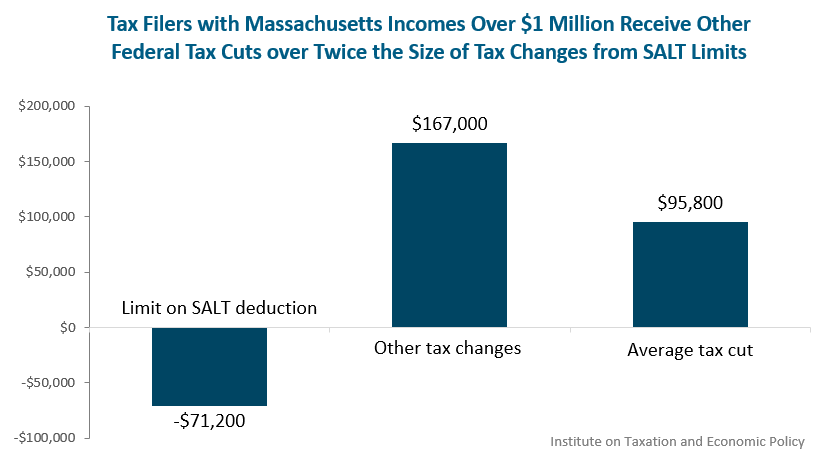 How will federal tax cuts be paid for, and at what cost to Massachusetts?

The tax cut is not free. No serious economic analysis projects that it will pay for itself. According to Congress’ Joint Committee on Taxation, the new tax law will increase the federal deficit over the ten year span by $1.456 trillion.2 While it is impossible to know for sure how Congress will fill the resulting budget deficits, it must ultimately be accomplished through some combination of future tax increases and spending cuts. Tax increases might affect those with higher incomes more; and spending cuts might affect low and middle-income earners more.

Current leaders in Congress and the White House have been explicit that in 2018 they intend to seek cuts in spending.3 Congress passed a budget resolution in October calling for several trillion dollars in spending cuts over the next decade. Speaker of the House Ryan, stated in November that “Congress will turn next year to spending cuts to try to lower the deficit, [and] that’s the second step after cutting taxes.4

To the extent that federal spending cuts occur, residents of Massachusetts will experience cuts to federal programs and cuts to state programs supported with federal dollars.5 Federal funding paid for one quarter of the state budget in Fiscal Year 2017.6 Federal cuts will also make it less likely that there will be federal and state investments to improve education, infrastructure, or other programs that support the long-term health of our state’s economy.

A Brookings Institution analysis has modeled the impact of the tax law based on an assumption that each household would pay the same dollar amount to cover the costs of the tax cut. It estimates “that each household would have to pay about $1,610 in 2018 to cover the cost of the tax cuts in that year.7 They find that once these costs of paying for the tax cut are added, over 74 percent of households nationally would be worse off than under current law because the combination of subsequent program benefit cuts and new taxes will be larger than the direct effect of tax cut in the law.

The eventual extent of the lost revenues could be substantially greater than the $1.5 trillion projection.  The hastily written tax law may create extensive new tax loopholes and opportunities for tax avoidance.8 Moreover, in order to comply with U.S. Senate rules that would not allow a larger deficit without prolonging debate and requiring greater consensus to approve the bill, many of the tax cuts expire before the end of a ten-year period. Several members of Congress who supported the tax bill, however, have stated that they have no intention of letting those tax cuts expire. If Congress does not allow those provisions to expire, then the deficit created by the tax cut will end up being an estimated $2.2 trillion. 9

How does the federal tax law affect Massachusetts state policies?

While it is too early for a full accounting of these impacts, several are becoming clear:

What can the Commonwealth do to compensate for the impacts of the federal tax law?

By adjusting our state tax system to offset some of the regressive federal tax cuts, Massachusetts could raise resources to invest in public priorities such as education and transportation that can strengthen our economy and expand opportunity.

One area where this could take place is the Fair Share Amendment on the upcoming November ballot. The Fair Share Amendment would make investments in education and transportation funded by a four percent addition to the income tax on income over $1 million. Currently, the highest-income tax filers in Massachusetts on average pay a lower share of their income in state and local taxes than do the other 99 percent of income earners.19 As described above, the new federal law will widen that disparity. Without the federal offset, a nine percent Massachusetts rate paid on income over $1 million would still be less than what California’s marginal rates have been, even with their federal offset. The most complete analysis of the relationships between taxes and migration coauthored by Stanford University professors along with economists from the U.S. Treasury was based on examination of 13 years of all actual tax returns exceeding $1 million across the country. Confirming earlier studies found the effects of additional taxes on incomes over $1 million found that interstate relocation motivated by tax reduction occurs “only at the margins of statistical and socioeconomic significance.” Applying their analysis and the new limits on state and local tax deductibility to the impact of the Far Share Amendment, over 99 percent of tax filers with incomes over $1 million would continue to reside in Massachusetts if the Fair Share Amendment is approved. An anticipated $35.4 million in state and local revenue would be lost as a result of relocation, leaving the net revenue benefit to the commonwealth at $1.86 billion (rather than the $1.9 billion that is the mid-point of the Department of Revenue estimate).20

There are other measures the Commonwealth could choose to take. For instance, currently the state links to the federal tax code for determining eligibility of 529 plan withdrawals. By decoupling from the federal definition, Massachusetts could decide that funds from 529 plans that are used to pay private primary and secondary school tuition would be subject to the state’s personal income tax. As the implications of the federal law become more apparent, the Commonwealth will have to decide how it applies state rules and where it decides to uncouple the state tax code from federal statute.

Two potential state responses to the new $10,000 limit on deductibility of state and local taxes have been the subject of recent discussion. One idea which the Governor of New York has proposed is to convert the existing income tax into a payroll tax (which remains fully deductible).21 Another proposal would be to convert income taxes into a charitable donation by granting 100 percent credit for donations to the state, which would also make the tax filer eligible to receive a federal charitable deduction.22 Both proposals merit study though they face a long list of challenges for implementation.23

Whether or not ideas for these ambitious state tax overhauls gain traction, the Commonwealth will face many decisions both large and small about how to interpret, react, and compensate for the new federal tax law and the cuts it delivers to Massachusetts.


1 Institute on Taxation and Economic Policy, December 2017. The analysis assumes that corporate tax benefits will be passed on to shareholders and employees. Comparisons are for 2019 because the new corporate tax rates is not in full effect until 2019. The average impact for the lowest-income 20 percent is 0.57 percent.

5 “Partnership in Peril: Federal Funding at Risk for State Programs Relied on by Massachusetts Residents,” Massachusetts Budget and Policy Center (February, 2017); and “How Vulnerable to Federal Budget Cuts is Transportation,” MassBudget (April 2017).

11 Calculated based on a 23 percent share of the $322 in reduced EITC credits described in this paragraph.

17 Institute on Taxation and Economic Policy, “The Consequences of Adopting a Territorial Tax System,” September 18, 2017.

22 On the legal basis for such a plan see, “Federal Income Tax Treatment of Charitable Contributions Entitling Donor to a State Tax Credit” at Social Science Research Network, January 8, 2018.

23 Alan Essig, “The Problems with State Workarounds to the Federal SALT Deduction,” Institute on Taxation and Economic Policy (January 2018).