Who Pays? Low and Middle Earners in Massachusetts Pay Larger Share of their Incomes in Taxes

Taxes are the main way communities pay for the things we do together. Taxes pay for essential programs and infrastructure we take for granted, like fire protection, public education, and health inspectors; roads, bridges, and public transit; and the support for people facing hard times. Examining how much people at different income levels pay in taxes is important when considering the fairness of tax policy. 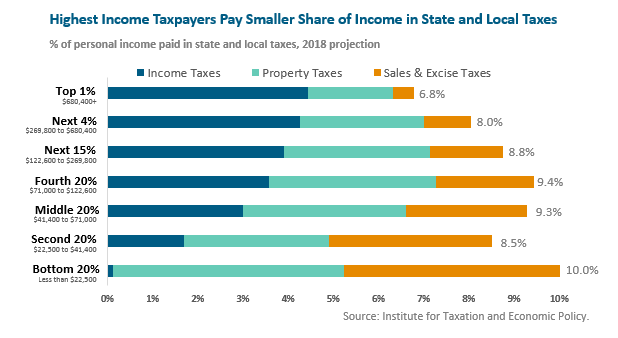 Massachusetts state and local taxes are composed of different types of taxes that impact higher- and lower-income taxpayers differently. When people with higher incomes pay a larger share of their incomes for a type of tax than do lower-income taxpayers, economists describe that as a “progressive tax.” When higher-income people pay a smaller share of their incomes toward a particular tax than lower-income people do, it’s called a “regressive tax.” Regressive consumption taxes can sometimes have other merits, especially in enhancing stability of revenues, and thus may be a valuable part of the overall system. When considering progressivity and regressivity, it is important to examine not just individual tax types (e.g., income taxes or sales taxes), but rather the overall tax system in a state.

A long history of systemic barriers to opportunity has prevented Black and Latinx people in Massachusetts from equitable access to high-paying jobs, education, and other avenues leading to higher household income.4 As a result, Black and Latinx workers are over-represented among low-income taxpayers and underrepresented among higher-income taxpayers. Given the “upside-down” structure of the Massachusetts tax system, this means Black and Latinx taxpayers tend to pay a larger share of their incomes in state and local taxes than White taxpayers do. In other words, the structure of Massachusetts’ current tax system makes it relatively harder for people of color to get ahead.

While whites comprise about three quarters of all Massachusetts tax filers, they represent 86 percent of the highest-income 5 percent of income earners, a group that pays a smaller portion of its income in taxes than do other filers.5 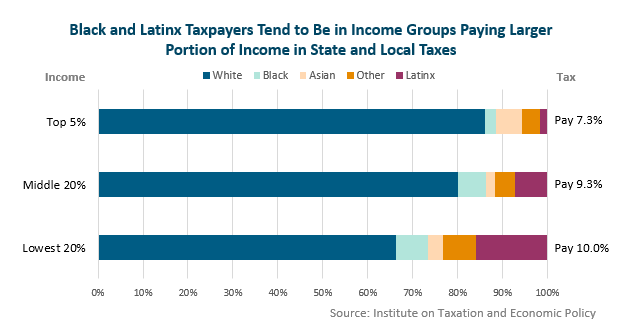 More revenue would be available to the Commonwealth for education, infrastructure, and other public programs if people with the highest incomes paid the same average portion of their income as other Massachusetts households. For instance, if changes to state tax law caused those with the highest 1 percent of incomes to contribute the same portion of their incomes in taxes as do the middle 60 percent of households, they would pay an additional $2.12 billion to the Commonwealth in 2018.

Despite those state tax increases, when federal tax changes are included in the picture, the net result would be a substantial tax cut for the highest-income 1 percent. Recent changes to the federal tax law deliver very large tax cuts to America’s highest income households (low- and middle-income households receive far smaller cuts as part of these federal tax changes).6 In 2018, Massachusetts households with the highest 1 percent of incomes will receive an estimated $2.51 billion in federal tax reductions. Thus, even if state tax law was amended as described in the previous paragraph, the highest income Massachusetts households still would receive a net (i.e., combined state and federal) tax reduction of some $400 million in 2018. 7

SEVERAL STATES HAVE TURNED THEIR TAX SYSTEMS “RIGHT-SIDE UP”

See MassBudget’s additional research on the income tax, the property tax, and the sales tax.

1The Massachusetts tax system is still more regressive than presented in this chart because the chart does not take the effects of the “federal offset” into account. When calculating income subject to federal tax, tax filers can deduct up to $10,000 of state and local taxes paid plus any state or local taxes they pay through business pass-through entities like S-corporations. These tax deductions disproportionately benefit upper-income taxpayers because: (1) they are more likely to receive the full $10,000 deduction for state and local taxes paid; (2) they are more likely to be able to deduct significant business earnings, and (3) they are avoiding a higher rate of federal tax on the deducted income because the federal income tax rates, unlike Massachusetts’, are higher at upper levels of incomes. See “Sweeter than SALT: Higher-Income Households Get Federal Tax Cuts More Than Twice SALT Losses,” (Mass. Budget and Policy Center, Jan. 2018).

2For a methodological description, please see, “Methodology,” in Who Pays? A Distributional Analysis of the Tax System in All 50 States (Institute on Taxation and Economic Policy, Oct. 2018). The data show the effect of current state and local tax laws, including the estimated amount of income, consumption, and property taxes paid by residents in that year. The data present the impact of tax changes in effect through September 10, 2018. Income taxes include personal and corporate income taxes. Property taxes include local levies on homes and motor vehicles as well as estate taxes, with property taxes on rental property distributed partly to property owners and partly passed on to tenants. Sales taxes include general sales and use taxes, as well as excise taxes on alcohol, tobacco, and motor vehicle fuels. Findings are not comparable to earlier years’ analyses because some taxes were not included previously. Unless otherwise stated, the Massachusetts data in this paper takes taxpayers of all ages into account including those over age 65. For reasons explained in its Methodology section, ITEP typically excludes taxpayers over age 65 from their state-by-state analyses. In order to facilitate accurate comparisons, the analysis in the last section of this paper examining multiple states, follows ITEP in not including taxpayers over 65.

4“Obstacles on the Road to Opportunity: Finding a Way Forward,” (Mass. Budget and Policy Center, October 2018).

5The highest-income 1 percent of households are not broken out for special analysis here because too few Black and Latinx taxpayers in the sample fall within this top income group. Without a sufficient sample size, it is not possible to generate reliable estimates.

8These five progressive state tax systems have top tax rates of 13.3 percent, 8.97 percent, 8.97 percent, 8.95 percent, and 8.95 percent, respectively. Delaware combines a graduated income tax that has a top rate of 6.6 percent with the absence of a sales tax, increasing the progressivity of the overall system. Among the other states with the 10 most progressive state and local tax systems for individuals are Oregon, New York, and Maryland (which has a similarly high top tax rate when also including county taxes). All three of these states include some form of “millionaire’s tax” as part of their overall tax systems.