Our Commonwealth does best when all people experience rising prosperity. But for several decades, the wealth and income of the top 1 percent of households has grown briskly while others have been left behind.1 While there are many reasons for this trend, one contributing factor is the way the federal tax deduction for charitable giving disproportionately rewards the giving of those with incomes over $1 million compared with donations made by moderate- and low-income tax filers.

Higher-income households certainly have more money to give away and consequently tend to give larger dollar amounts than households with less income. However, even considering these differences, the tax benefits of charitable tax deductions are heavily skewed toward the top. The average tax filer in Massachusetts with an income under $50,000 deducted $141 in charitable giving in 2016, whereas tax filers with an income over $1 million deducted almost $187,000.2 While the average income of the latter group is 160 times greater than the former, their average charitable deduction is 1,320 times as large.

Research shows that high-income households do not necessarily give a larger share of their income than do people with lower incomes. Many studies even find that overall, those with high incomes give a smaller share of income than do middle- and low-income givers.4 Nevertheless, the federal tax system delivers disproportionately large benefits to high-income households for their charitable giving. 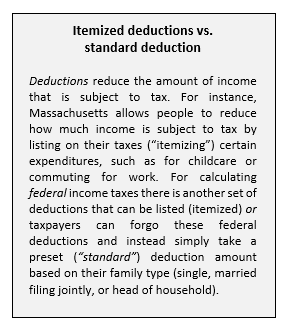 A key reason the tax benefits for charitable giving are skewed so heavily toward high-income households is that federal tax filers only can deduct their charitable giving if they itemize their deductions. For most moderate- and low-income people, it makes more sense to take the larger (and simpler) standard deduction. For very high-income people, the standard deduction represents only a small portion of their income, prompting the vast majority to itemize deductions – including claims for charitable deductions – thus avoiding taxation on a larger share of their income.

These differences are expected to become much greater when people file their 2018 federal taxes because substantially fewer moderate- and low-income people are expected to itemize their deductions. The federal tax law enacted at the end of 2017 doubles the standard deduction available for those who don’t itemize (to $12,000 for singles and $24,000 for joint filers). Both changes are expected to discourage moderate- and low-income tax filers from itemizing, but won’t substantially affect the choice to itemize among those with the highest incomes.

For those with the highest 1 percent of incomes, the portion of contributions that gets deducted from income taxes is projected to remain at 99 percent, according to national estimates by the Tax Policy Center.6 Meanwhile, among those with incomes in the middle, the percent of charitable giving that will get deducted is projected to fall to less than a quarter. And for those people with the lowest incomes, the amount of charitable giving that receives a tax deduction is expected to fall to 5 percent. In sum, the benefits of the charitable tax deduction will become significantly more skewed toward those with the very highest incomes.

Massachusetts does not have a charitable deduction for state income taxes. However, if the state’s income tax rate is reduced to 5.0 percent in January 2020, as anticipated by the Department of Revenue, then a state charitable deduction would be activated automatically the following year as a result of a trigger established in 2002. Adding a state charitable deduction to our tax code would reduce income taxes disproportionately for those with the highest incomes and would reduce state revenues by about $300 million annually,7 leaving less money for education, public health, transportation, affordable housing, and other programs funded through our state budget.

1While the highest-income 1 percent of households in received 10 percent of all income in Massachusetts in 1974, that share increased to a quarter of all income in 2014. See “Wages & Income” in State of Working Massachusetts 2017 (MassBudget 2017), http://www.massbudget.org/reports/swma/wages-income.php . Wealth is distributed more unequally than income. Data on wealth disparities over time is available at the federal level through the Federal Reserve’s Survey of Consumer Finances. See Figure 5 “Wealth Concentration Has Been Rising Toward Early 20th Century Levels,” in Center on Budget and Policy Priorities, “A Guide to Statistics on Historical Trends in Income Inequality” (Dec. 2018) at https://www.cbpp.org/research/poverty-and-inequality/a-guide-to-statistics-on-historical-trends-in-income-inequality.

2IRS, Statistics of Income Division, Individual Master File (2016), Table 2. “Individual Income and Tax Data, by State,”  If tax filings with negative income are included in the “$50,000 and below” group, then the average charitable deduction for this group would be $138.

4“Who Gives the Most to Charity,” The Almanac of American Philanthropy (Philanthropic Roundtable 2016) conducts a meta-study of major examinations of how charitable giving varies with income and finds, “If you measure charitable donations as a fraction of the donor’s income, giving is most robust at the top and bottom of the earnings spectrum.” See also, Pamala Wiepking and René Bekkers, “Who gives? A literature review of predictors of charitable giving. Part Two: Gender, family composition and income,” Voluntary Sector Review (2012); James, R. N., & Sharpe, D. L. (2007). “The Nature and Causes of the U-Shaped Charitable Giving Profile,” Nonprofit and Voluntary Sector Quarterly, 36(2), 218-238; McClelland, R. and Brooks, A.C. (2004), John W. Mayo, and Catherine H. Tinsley. 2008. “Warm glow and charitable giving: Why the wealthy do not give more to charity?” Journal of Economic Psychology 30(3):490-49.; and Wiepking, P. (2007) “The philanthropic poor: In search of explanations for the relative generosity of lower income households”, Voluntas, 18: 339-358. On the other hand, a 2008 Congressional Budget Office study found those with incomes over $500,000 contributed the largest percent of their income. See CBO, “Options for Changing the Tax Treatment of Charitable Giving” (2011), Figure 2. Research suggests high-income individuals give less in U.S. states with high inequality. Moreover, in an experiment, high-income people were less likely to participate in a giving activity after their state had randomly been portrayed as highly unequal compared to individuals whose states had been portrayed as more equal. See Stéphane Côté, Julian House, and Robb Willer, “High economic inequality leads higher-income individuals to be less generous,” Proceedings of the National Academy of Sciences (2015) at https://www.pnas.org/content/112/52/15838 . Historically over the last roughly 100 years, changes in U.S. inequality have likewise tended to move inversely with changes in charitable giving by high-income households. See Nicolas J.Duquette, “Inequality and philanthropy: High-income giving in the United States 1917–2012,” Explorations in Economic History (Oct. 2018), https://doi.org/10.1016/j.eeh.2018.08.002

7The most recent IRS data shows almost $6.1 billion in charitable deductions claimed by Massachusetts tax filers in 2016. If the same amount of income was deducted on state income taxes and thereby not taxed at a state rate of 5 percent, state revenues would be reduced by $305 million. Actual charitable giving deduction claims could be somewhat higher because incomes and the population have grown since 2016. The amount could also be larger because some tax filers who don’t itemize federally will be allowed to claim itemized deductions on their state income taxes. On the other hand, not every dollar claimed for charitable deductions directly results in a loss of revenue if other deductions and exemptions have already fully reduced tax liability.

8“Who Pays? Low and Middle Earners in Massachusetts Pay Larger Share of their Income in Taxes” (MassBudget 2018), http://www.massbudget.org/report_window.php?loc=Who-Pays-Low-and-Middle-Earners-in-Massachusetts-Pay-Larger-Share-of-their-Incomes-in-Taxes.html