Child Poverty in Massachusetts Unchanged, Most Children Have Health Insurance

Children in Massachusetts fare better than in much of the rest of the nation, as child poverty in the Commonwealth remains unchanged and health insurance coverage is widespread, according to data released today by the U.S. Census Bureau with its American Community Survey (ACS): 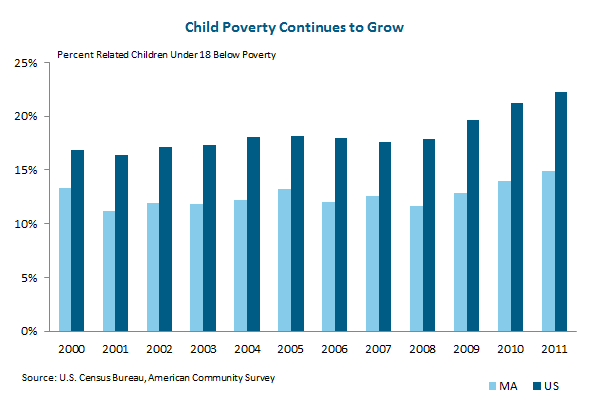 The national child poverty rate has also increased since 2007, from 17.6 percent. The Census Bureau estimates that there are more than 16 million children nationwide living in poverty. Surprisingly, during the last economic recovery, child poverty in the United States did not decline overall. This trend continues, as the recent slow recovery is not yet pulling children out of poverty. 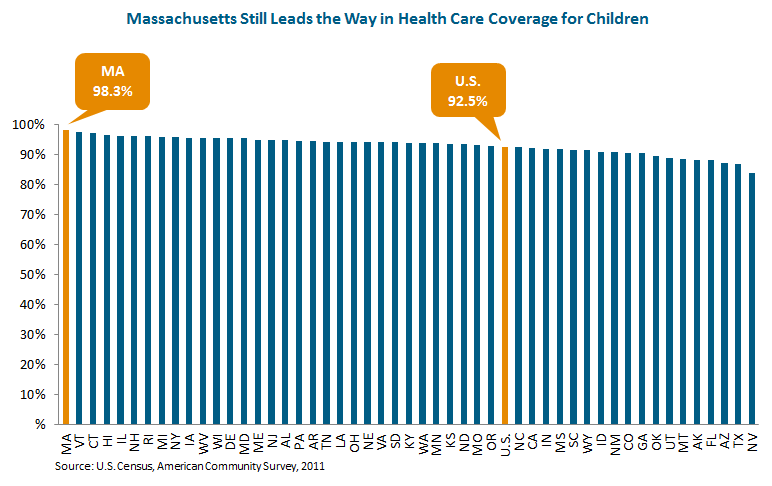 These numbers may differ slightly from figures released last week by the Census Bureau with the Current Population Survey (CPS). The CPS is the official source for national level poverty and income data, but the ACS is based on a larger sample and provides better information for comparing one state to another, and for providing more detailed information on the status of children.

Because these data come from surveys of a random sample of households, one cannot be certain that the estimate produced by the particular sample included in the survey reflects the actual rate for the entire population. When comparing two measures—for instance, the poverty rate in two different years or health insurance coverage for two different states—it is important to consider how this sampling variability may affect the comparison. If we can determine that the difference that appears between the two samples would occur due to sampling variability fewer than 10 times out of 100, then we can say that we have a 90 percent level of confidence that the difference between the two measures reflects a true difference, and is not simply a result of random variation. In other words, the chance that the difference between the two estimates is simply the result of random chance is less than 10 percent. The 90 percent confidence level is typically used when analyzing ACS data, and that is the measure we use here when defining a difference as significant. For more on calculating levels of confidence and testing for significance, see Appendix 4 in the ACS user guide.