Data released today by the Census Bureau from its American Community Survey (ACS) show that Massachusetts continues to lead the nation when it comes to health insurance coverage. In 2011, the proportion of people in the state who lacked health insurance coverage was 4.3 percent, compared to the U.S. average of 15.1 percent. In other words, 95.7 percent of people in Massachusetts had some form of health coverage in 2011, compared to 84.9 percent nationwide. 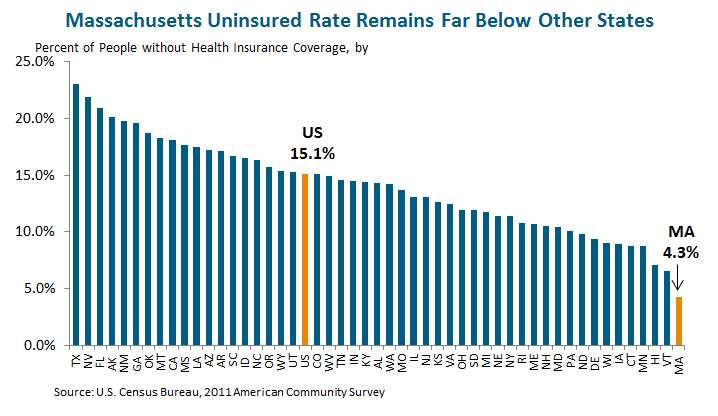 The American Community Survey (ACS), which is conducted on an ongoing basis, contacts over 3 million households each year and asks questions about a variety of demographic measures, including age, income, employment, health insurance coverage status and type, and racial characteristics. The Census Bureau began conducting the ACS in 2000, and added questions about health insurance coverage in 2008. Because of its large sample size the ACS provides reliable single year data on the state level, as well as other geographical units (e.g., counties) with populations over 65,000, making it a useful source of information when comparing state health insurance coverage rates. However, because health insurance questions have only been asked since 2008 (and the survey methodology was changed in 2009), the ACS data cannot currently be used to analyze historical trends in coverage.

The Current Population Survey (CPS) is an ongoing survey that focuses on wages and employment. The CPS also includes an Annual Social and Economic Supplement (ASEC), conducted mainly in March of each year, which includes more detailed questions about income, health insurance, and other demographic measures. The ASEC uses a much smaller sample size—about 100,000 addresses across the country—than the ACS, but it has been conducted over a longer period of time. The survey asks about health coverage in the year preceding each March, and has tended to result in under-reporting of health insurance coverage and thus higher reported rates of uninsurance in the past, although CPS has made some adjustments to account for this problem. The CPS data can be used to look at historical trends on the national level and, with some caution, on the state level (for instance it is generally advisable to pool two or three years of data when looking at state-level numbers).

The Massachusetts Health Insurance Survey (MHIS) began in 1998 and has been conducted annually since 2006. The survey reaches about 5,000 households in Massachusetts and is usually conducted in the spring of each year. Survey results for 2011 are not yet available. In earlier years the survey appeared to under-report the number of people without health insurance coverage. Changes in the survey's methodology were made in 2008 and data from that and subsequent surveys cannot be compared to earlier survey results.

While each survey has produced slightly different estimates of health insurance coverage, they all tend to show the same general trend. Despite the variation in the MHIS and CPS ASEC results, both show a sharp drop in the number of uninsured people following passage of the Massachusetts health reform law.