New data released today by the Census Bureau from its American Community Survey (ACS) show that the poverty rate in Massachusetts remained at roughly the same level as in 2011. The poverty rate measures the percentage of people who live in households with incomes below the poverty threshold. In 2011, this threshold was $11,484 for an individual and a little over $22,800 for a family of four.

The ACS data released today provide more reliable state-level measures of poverty than Census data released last week. See the end of this fact sheet for detail on how the Census Bureau measures changes in the poverty rate. 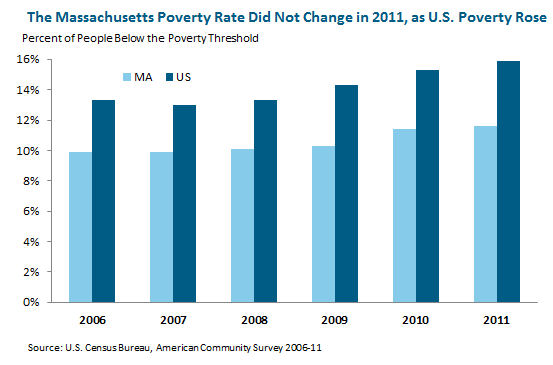 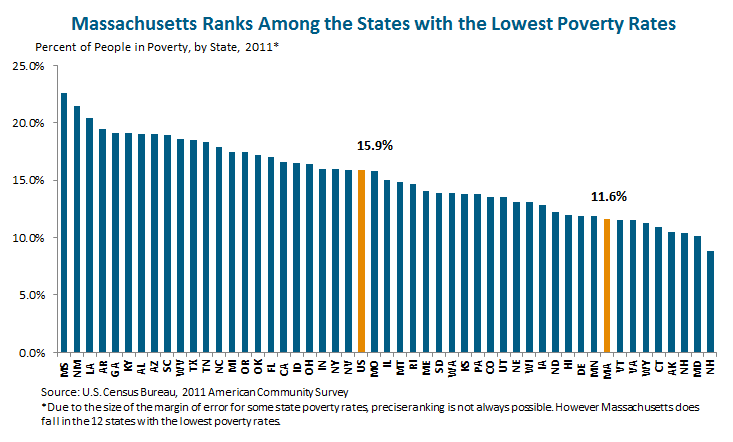 To determine the poverty rate the Census Bureau counts all money income earned by a family before taxes—in other words, non-cash benefits such as Medicaid and Supplemental Nutrition Assistance Program (SNAP) benefits are excluded, as are tax liabilities and credits. The federal poverty threshold varies depending on the size and composition of the family and is updated each year for inflation. For 2011, the poverty threshold was about $11,484 for a single person under the age of 65 and a little over $22,000 for a family of four (thresholds for individuals and couples over the age of 65 are somewhat lower). The poverty thresholds do not vary by geography and thus do not reflect differences in cost of living among states. The Census Bureau has begun to provide national-level data using an alternate poverty measure that takes into account taxes (including the value of the Earned Income Tax Credit) and non-cash support such as Supplemental Nutrition Assistance Program (SNAP) benefits. For more discussion see here.