How Vulnerable is Massachusetts Transportation to Federal Spending Cuts?


A high-quality transportation system is important for our quality of life and the strength of our economy.1 Our state and federal governments work together to fund the construction and maintenance of our roads, bridges, rails, and public transit systems. In the coming months Congress is expected to debate proposals that could destabilize this partnership. This fact sheet examines the extent to which the Massachusetts Department of Transportation (MassDOT) and transit agencies across the state rely on federal sources of revenue for their operations and capital investment. It describes the federal grants that are most vulnerable to near-term budget cuts and how larger sums of federal transportation funding could face cuts after 2020.

The Massachusetts Department of Transportation (MassDOT) oversees 9,578 miles of roads, over 5,000 bridges, 358 miles of rail track, as well as public transit, aeronautics, and transportation licensing and registration across the Commonwealth.2 Like other states’ transportation departments, MassDOT maintains a separate “operating budget“ for operating expenses and a larger “capital budget” for capital expenses, such as reconstructing a highway off ramp or new train signals.3 Both budgets receive federal support, but far more on the capital side.

MassDOT’s operating budget received $82.5 million in federal transportation support in Fiscal Year (FY) 2016, the most recent year for which an audited financial statement is currently available.4 These funds comprised 7 percent of the department’s total operating budget revenues. Most of this federal operating revenue ($47.2 million) is federal grants, with the remainder comprised of federal reimbursements for MassDOT payroll costs from federally-funded capital projects.5

Not all federal grants received by MassDOT appear in the state budget. Some recipients are local, regional, or quasi-public entities. Other grants are received by the Massachusetts Transportation Trust Fund, which is controlled by MassDOT but separate from the Commonwealth’s budget.6 For FY 2018, Governor Baker’s budget proposal anticipates $14.8 million in federal transportation grants, the largest of which is $6.4 million to address special transportation needs for elderly and individuals with disabilities.7 Looking back at the last twenty years of state budgets proposals in Massachusetts, the peak year for anticipated federal transportation grant funding in the budget was $112.3 million in FY 2013.8

Federal support for transportation in Massachusetts is especially important in the Commonwealth’s investment in capital projects. Like other states, Massachusetts has a process to prioritize and designate funds for the most needed durable transportation investments as part of a capital plan. The Department of Transportation’s Capital Plan for Fiscal Year 2017 is $2.016 billion dollars, almost twice the size of its projected operating budget.9 According to MassDOT, $669.6 million of capital budget revenues are from federal sources, approximately one-third of the revenues that support the capital budget.

Federal transportation support to the Massachusetts Bay Transportation Authority (MBTA) is overwhelmingly for investment in capital programs. As a transit provider in a large-population urban area, the MBTA is not permitted to use most federal transit grants for operations. The MassDOT figures cited above do not include the MBTA’s separate Capital Investment Plan during this period.15 These future plans strongly rely on the Federal Transit Administration. Anticipated federal sources total $3.614 billion from FY 2017 through FY 2021 -- more than half the $6.811 billion in capital investment planned for the period.16 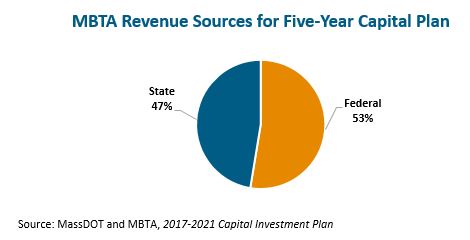 The Federal Transit Administration (FTA) provides funding to other agencies besides the MBTA. Most of this funding is restricted for capital investments, although there are exceptions, such as for certain kinds of preventative maintenance and for compliance with the Americans with Disabilities Act. The FTA annually pays grants to Regional Transit Authorities as well as the Department of Public Utilities as part of a rail safety program. Several of the small grants MassDOT lists in its operations budget are also funded by the FTA. In total, FTA apportionments to entities within Massachusetts were $511.5 million in federal Fiscal Year 2016.17

Over the longer term, the funding of federal transportation has been strained by Congressional reluctance to increase the federal gas tax rate or raise other new transportation revenues. Congressional Budget Office analysis found that federal infrastructure investment declined from a peak of 1.03 percent of Gross Domestic Product in 1980 to 0.55 percent in 2014, the most recent year of the study.22 Congress has not increased the main source of federal transportation revenue, the 18.4 cent-per-gallon gas tax, since 1993. The value of this tax continues to erode each year, already losing over 40 percent of its value from inflation. Gas tax revenues have been further diminished by automobile fuel-efficiency improvements and a long-term slowdown in the growth of driving miles. Congress has averted cuts to big federal transportation programs only through a series of temporary and one-time infusions since 2008, mostly from the federal General Fund.23 The current five-year federal transportation act, which authorizes $305 billion in federal spending,24 relies on $70 billion of General Funds to make up for shortfalls in the gas tax. These revenues are not transportation user fees and are more vulnerable to federal cuts.25

In the meantime, the federal funding most vulnerable to cuts will be “discretionary” grant programs, which are subject to annual Congressional approval. President Trump proposed to cut these appropriations from $18.6 billion to $16.2 billion, a 12.7 percent decline in his budget outline.26 The President proposes cuts to Amtrak and to cut the Transportation Investment Generating Economic Recovery (TIGER) program, which has made $154.4 million in awards to Massachusetts since 2009.27 The President’s budget outline proposes also to approve no new grants for the Capital Investment Grants programs for expanding and improving public transit capacity.28 Massachusetts has received grants from these competitive programs in the past and the lack of this funding source would make it more difficult to launch large new transit expansion and improvement projects in the future.

3There can be exceptions for the categorization of some activities such as preventative maintenance, personnel who work continually on capital finances, and construction to comply with the Americans with Disabilities Act.

5MassDOT, Legislative Report on Revenue and Expense, Budgeted Fiscal Year 2016, p. 4. In addition, MassDOT’s operating budget includes a $48,633 reimbursement from the Federal Highway Administration for a pilot study with the University of Massachusetts related to Climate Change.

8See Governors’ budget proposals, FY1998 to FY 2018. The comparison for years prior to the full consolidation of MassDOT includes equivalent transportation items assigned to other departments. The FY 2013 budget proposed by the Governor anticipated $54.6 million for the Amtrak Vermonteer line improvement and $24.4 million for South Station expansion.

16This federal-source total includes $388 million in federal low-interest TIFIA and RIF financing that the MBTA must pay back over time.

17This total represents Massachusetts apportionments listed by the Federal Transit Administration in its “Fiscal 2016 Apportionment Tables.” When grants for service in urbanized areas that extend across state lines are not listed as subdivided into state portions, the amounts here are counted wholly as for Massachusetts when the central city is located in Massachusetts. The total does not include the $100 million in federal Fiscal Year 2015 appropriation in Table 16 that remained unobligated because the MBTA paused the project to renegotiate cost and scope.

18As a Congressional Budget Office report explains, transportation spending is unusual for having a “split budgetary classification”: “Federal programs obtain the authority to incur financial obligations (referred to as budget authority) either in permanent law or in annual appropriation acts; the spending to pay for those obligations is recorded as outlays in the budget. Budget authority and outlays derived from annual appropriation acts are usually classified as discretionary, and those derived from other laws are labeled mandatory. Generally, the budget authority and outlays of a federal program are both classified in the federal budget as either mandatory or discretionary. However, since 1988, for the surface transportation programs examined in this report, the budget authority has been classified as mandatory while the outlays have been classified as discretionary.” CBO, The Highway Trust Fund and the Treatment of Surface Transportation Programs in the Federal Budget, (June 2014).

19Gas taxes and their accompanying revenues have never fully functioned as a user fee and they cover a declining portion of the cost of driving. See Who Pays for Roads, How the ‘User Pays’ Myth Gets in the Way of Solutions to America’s Transportation Problems (Frontier Group, May 2015). In addition to the motor fuels tax, the Highway Trust Fund receives a much smaller amount of revenue from excise taxes on the sale of trucks, trailers, and truck tires. The Congressional Budget Office estimated in 2011 that 80 percent of Highway Trust Fund allocations are by formula.

21Congressional Budget Office, The Highway Trust Fund and the Treatment of Surface Transportation Programs in the Federal Budget, (June 2014), p. 12.

25The U.S. House of Representatives, starting with the 112th Congress, began treating General Fund infusions into the Highway Trust Fund as subject to the same budgetary spending caps as other programs. See Congressional Budget Office, “The Highway Trust Fund and Treatment of Surface Transportation Programs in the Federal Budget,” (June 2014), p. 16.

27Since the TIGER program began granting awards in 2009 through 2006, Massachusetts entities submitted 126 applications for over $2.2 billion in project grants. With limited funds and competition from projects in the other 49 states, Massachusetts received seven awards, totaling $154.4 million. These awards were: $20 million in 2009 to the City of Revere for transit facilities and streetscape; $20 million in 2009 for Fast Track New Bedford; $55.5 million for the Fitchburg Commuter Rail Extension and Wachusett Station; $10 million to the MBTA in 2011 for Merrimack River Bridge Rehabilitation; $15,523,700 to the City of Boston for Connect Historic Boston; $20 million in 2014 to the MBTA for Ruggles station modernization; and $13,389,750 in 2015 for Lowell Canal Bridges. See TIGER awards at https://www.transportation.gov/tiger .