A First Look at the Governor's Proposals on Education, Transportation, and Revenue

In recent days, the Governor has introduced three major policy initiatives. 1) Increased funding for education, from early ed. through college. 2) Fixes and improvements to strengthen our transportation system. 3) A revenue plan that would pay for these initiatives. Taken together, these proposals represent a significant new effort to invest in our people, our infrastructure, and the long-term economic prospects of our state.

Among other things, the Governor's proposals include:

What follows is a first analysis of the Governor's proposals, including how they would affect Early Education & Care, K-12, Higher Ed., Transportation, the Sales Tax, and the Income Tax.

Education plays an important role in helping grow state economies. In Massachusetts, as with most states in the nation, there is an increasingly strong connection between improving the skills of the state workforce and creating a high-wage economy.5 Recognizing this connection, the Governor proposes increasing K-12 education support in FY 2014 by about $84 million and by significantly more in future years. This proposal includes new funding for a couple of targeted grant programs and for increasing Chapter 70 education aid, an important source of revenue for public school districts across the state. Specifically, the Governor proposes increasing:

It is important to emphasize that while the Governor's office has released some information outlining these education investment proposals, full detail will not be available publicly until the Governor's FY 2014 budget is released on January 23, 2013. The Governor has, however, indicated that when fully phased in his education initiative would increase investments in education by $1 billion annually.

Since 2001, Massachusetts has cut higher education spending by 30% when adjusting for inflation.7 At the same time, the economic evidence increasingly suggests that a well-educated workforce is critically important for the creation of a strong, high wage, state economy.8 Under the Governor's proposal, an additional $152 million would be available for Higher Education in Fiscal Year 2014 and $274 million in the following year. Funding would be allocated to public institutions of higher educations and specific programs. These programs include: 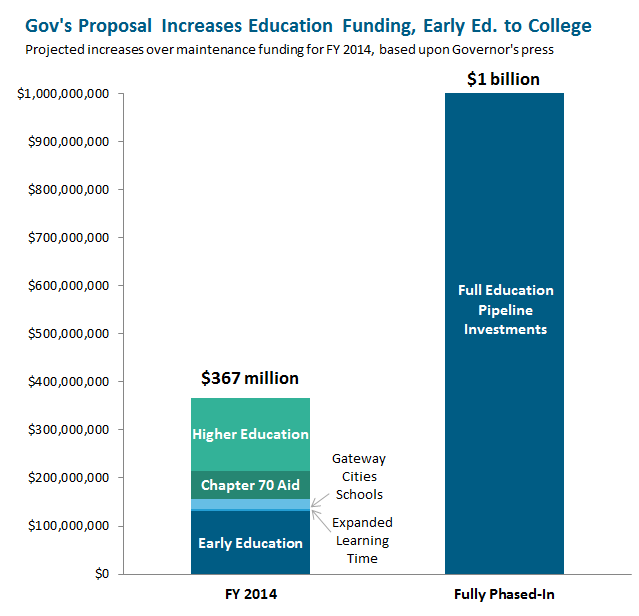 Just as investments in education help boost state economic strength, a growing body of research makes the case for the economic development benefits of investing in Massachusetts's transportation system. A significant portion of revenue raised through the Governor's tax reform proposal would be dedicated to repairing and maintaining the state's existing transportation infrastructure as well as to making long-delayed network expansions and improvements. Investing in modernizing the state's subway, bus, road, and bridge networks would help stimulate the economy both by creating new construction jobs and by reducing travel times statewide, providing residents more reliable access to work and helping businesses bring goods to market more efficiently.11

In addition to directing significant sales tax revenue to transportation, the governor proposes a new regular schedule for adjustments to the state gas tax, tolls, MBTA fares, and RMV fees so that the value of these taxes and fees would more automatically keep up with regular cost growth. These revenue sources would remain dedicated to transportation-related investments and services. Specifically, the Governor proposes:

The current tax structure in Massachusetts is regressive; middle and lower-income people pay a larger share of their household income in taxes than do higher-income people (see this MassBudget factsheet.) 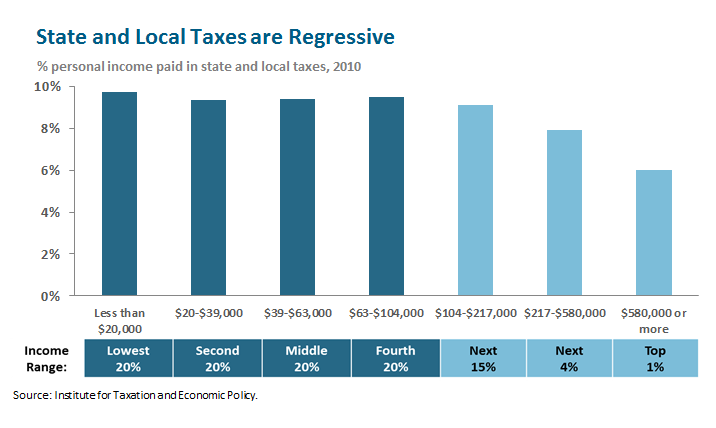 This flaw in our tax system is in part due to the regressive nature of the sales tax (see chart below.) 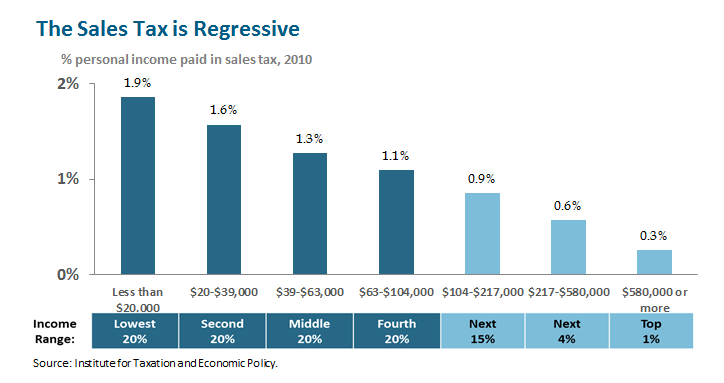 The income tax is the only major component of our tax system that functions to reduce overall regressivity (see this MassBudget factsheet.) 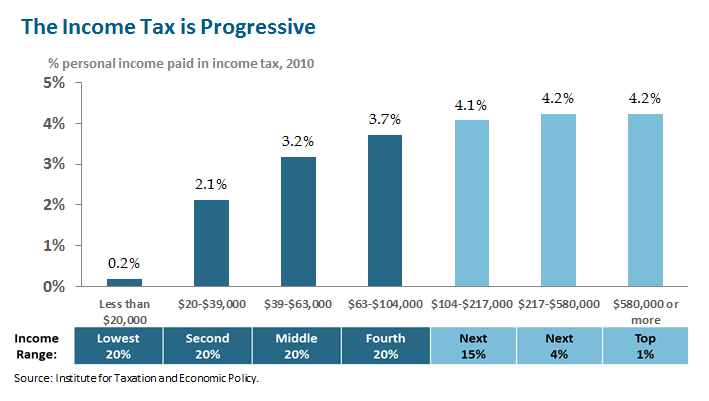 While Massachusetts applies a flat 5.25 percent rate to taxable income regardless of the income level of the taxpayer, a number of features of the Massachusetts income tax produce the markedly progressive net effect seen in the chart above. Two of the more notable of these features are the "Low Tax/No Tax" status, which exempts households with very low income from the income tax, and the automatic personal exemption (PE). The PE applies to all tax filers and removes a set amount of income from taxation ($4,400 for single filers and $8,800 for married couples). This means that for low and moderate income families, a relatively large share of household income is not subject to the income tax. For high-income filers, however, the fixed value of the personal exemption removes only a small share of their total income from taxation. The net effect of the PE is therefore progressive.

The Governor's newly announced plan for increased public investments in education and infrastructure includes a proposal to raise an additional $1.9 billion in annual revenues, and to do this in a way that reduces the tax system's overall regressivity. As a result, the system would move somewhat closer to a flat-tax structure, where people at all income levels pay the same share of their income in taxes—and away from the current, markedly regressive structure. While the Governor's full revenue package is composed of many pieces, in this factsheet we look briefly at just a few of the major elements of the plan.

The Governor has proposed decreasing the sales tax from the current 6.25 percent to 4.5 percent. Costing the Commonwealth roughly $1.4 billion annually, this change will lower the taxes of people in all income groups. Given that the sales tax is regressive, as discussed above, any reduction in the sales tax rate will disproportionately benefit low and moderate income households. As a result, this change will reduce the regressivity of the tax system.

Additionally, the Governor proposes doubling the automatic personal exemption (PE), from $4,400 to $8,800 for single filers and from $8,800 to $17,600 for married filers. This change will cost the state an estimated $1.1 billion annually and will help reduce overall tax regressivity.

The Governor's proposal also eliminates a number of specific existing personal income tax exemptions and deductions. The eliminations of tax expenditures recommended by the Governor would raise approximately $1.3 billion. Together with the proposed increase to the personal exemption, the net revenue gain from these two reforms would be about $240 million—a relatively small portion of the overall tax reform package.

The Governor proposes a number of changes to business taxes as well:

In addition, the proposed reduction in the general sales tax rate will reduce the sales taxes paid by businesses on many of their purchases.

1 For more information about the economic gains of high quality early education and care on both parents and children, see Economic Gains from Early Education and Care.

2 For more information about funding for early education and care, see Declines in Spending on Early Education and Care in Massachusetts.

3 For information about recent increases in the number of children on the waitlist, see Declines in Spending on Early Education and Care in Massachusetts.

11 Includes a two percent cost growth over FY2013 funding and the addition of the proposed $152 million.