The state housing budget funds affordable housing programs for low-income people as well as emergency shelter and housing supports for low-income, homeless families and individuals.1 Because it has extensive housing resources and developed a long-term plan to end homelessness, Massachusetts ranks among the top states in addressing the needs of homeless children and their families.2 Recently, however, it has severely limited homeless families' access to shelter. There is evidence that these restrictions may be forcing some homeless families to sleep in cars, public transit waiting rooms or hospital emergency rooms3 before they become eligible to stay in state-supported shelters. While restricting access to shelter, the state has expanded housing supports for low-income families. There is some concern that these supports may be insufficient to keep these families housed over the long term. This brief describes programs that support low-income, homeless families, discusses recent changes and looks at the House and Governor's Fiscal Year (FY) 2014 budget proposals for these programs.

In the late 2000s the Massachusetts Interagency Council on Housing and Homelessness developed a Housing First policy to end homelessness by 2013.4 Historically the state provided low-income homeless families and their children under 18 years old with shelter through the Emergency Assistance (EA) program. The Housing First policy aims to reduce the use of shelter by helping homeless families' secure housing. In FY 2010 the state moved homelessness programs from the Department of Transitional Assistance to the Department of Housing and Community Development (DHCD) to improve access to affordable housing resources.

When Massachusetts began implementing its Housing First policy, the Great Recession hit. In late 2008 revenues plummeted—caused by declining economic activity and exacerbated by almost $3 billion in income tax cuts adopted between the late 1990s and 2002. (See Income Tax Cuts and the Budget Deficit in Massachusetts: http://www.massbudget.org/report_window.php?loc=tax_cuts_factsheet.html)

As the economy slowed, low-income parents, who lost their jobs and housing, turned to EA for shelter.5 In July 2008, 2,240 families were living in shelters; by November 2012 (in FY 2013) that number had grown to 3,800 before dropping to 3,453 in February 2013.6 This rising demand forced the state to house families in hotels and motels because the shelters were full. Due to the worsening economy, in the early years of the recession the cost of shelter programs increased markedly.7 Between FY 2009 and 2011, before the state began shifting funding away from shelter and into short-term housing subsidies, EA's budget grew by $72.2 million after adjusting for inflation. 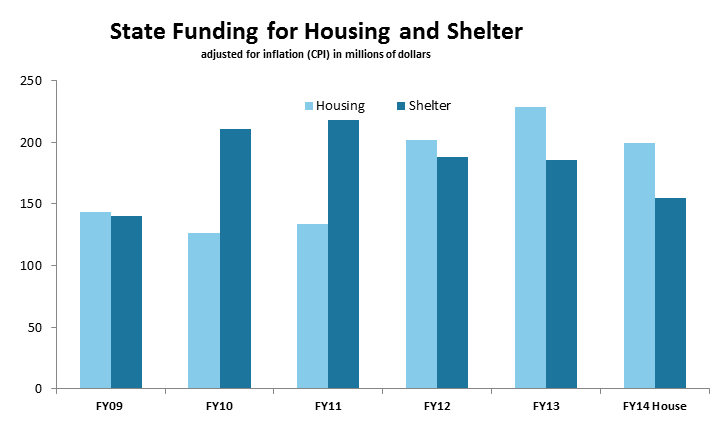 In an effort to reduce reliance on and costs for EA, the state began restricting low-income, homeless families' access to shelter. The FY 2010 budget lowered the income level at which families were eligible for EA from at or below 130 percent of poverty to the current level of 115 percent.

In FY 2012, the state further limited families' access to shelter while taking another step in expanding housing resources with the creation of the HomeBASE program. HomeBASE provided three types of assistance to help families who were eligible for EA to find and secure housing. Its housing and moving assistance programs provided up to $4,000 in one year to help families relocate to permanent housing. Its rental assistance program provided families with up to 3 years of subsidies to help families pay for permanent housing. The rental subsidy program required that families pay no more than 35 percent of their income in rent and utilities.

In FY 2012 only homeless families who were victims of domestic violence, whose head of household was 21 years old or younger, or who lost their house to fire or natural disaster, could immediately enter shelter. Others, who became homeless because they were evicted or asked to leave their current housing, were diverted to HomeBASE for housing assistance. The state did allow families who were unable to find housing, to move into shelter if they had nowhere else to live.

Even as the state expanded access to housing through HomeBASE, demand for shelter continued to increase as the economy remained sluggish. Many low-income families were unable to find affordable rental housing particularly in high cost regions of the state like Greater Boston.10 In an effort to lower shelter costs and end the use of hotels and motels,11 the FY 2013 budget significantly limits families' access to EA while increasing some housing supports.

The new rules adopted in the FY 2013 budget limited the population of families who could qualify for EA and HomeBASE. Only families who lose their housing because of domestic violence, fire or other natural disaster, eviction through no fault of their own or because their current housing is deemed unsafe, unhealthy or uninhabitable, are eligible for EA.12 Families who leave overcrowded housing or are asked to leave often cannot move into shelter until they have lived in unhealthy conditions.

While DHCD has not directly assessed how many families have been turned away from shelter during FY 2013, the number of families applying has fallen and the reasons why they are entering shelter have changed since the adoption of the new eligibility rules. While an average 1,100 families applied per month for EA in FY 2011 and an average 1,400 families applied per month for both EA and HomeBASE in FY 201213, in early FY 2013 as the state began implementing the eligibility restrictions, the number of applications dropped to an average of 840 per month.14

The reasons that families entered shelter also changed. Prior to FY 2013, over half of families reported being homeless because they were evicted, had been living in overcrowded conditions, or were asked to leave. Under the new rules only those families who were evicted are eligible for EA. Those who left overcrowded housing or were asked to leave often cannot enter shelter until they have lived in unhealthy or unsafe conditions. Since the adoption of the new rules more than half of the families entering shelter reported that they had been living in unhealthy or unsafe conditions.15

While the FY 2013 budget cut access to EA it expanded some affordable housing programs including:

Most of this expansion in housing funding, however, appears to be targeted to homeless families who are already eligible for EA. HomeBASE is only available to families who qualify for EA. The new MRVP vouchers will be used to help families living in shelters, particularly those in hotels and motels, move into permanent housing.16

Families who are no longer eligible for EA may have access to limited housing resources including RAFT. Like HomeBASE, RAFT provides short-term assistance of $4,000 in one year. It is unlikely to be sufficient to help many of these families afford housing in high cost regions like Greater Boston. Moreover, RAFT is a homelessness prevention program that provides one-time funding to help families stay in current housing or move into new housing. It is of no use to those who have no place to live.

There is evidence17 that since the state adopted the new EA eligibility rules, low-income homeless families have been forced to sleep in unsafe conditions before they can move to shelters. Groups who work with these families have encouraged the Governor and Legislature to give those who are in imminent danger of becoming homeless, access to EA. There is also concern about the 6,000 families receiving HomeBASE rental subsidies, including those receiving the multi-year subsidies, whose benefits will run out in FY 2014. It is not clear how some will be able to afford to stay in their housing as market rate prices may well be beyond their reach.18

Both the Governor and the House FY 2014 budgets propose no changes to the current eligibility requirements for EA and HomeBASE and recommend reducing funding for the two programs.

Both budgets propose increases in housing, largely through the creation of a new housing trust fund.

In the late 2000s Massachusetts adopted a plan to end homelessness by improving access to affordable housing. With the onset of the Great Recession many low-income parents lost their jobs and housing and turned to the state for temporary shelter. State spending on EA increased to meet the rising demand. To cut costs, the state has limited low-income families' access to EA while increasing housing resources to help families move out of shelter and into housing. Some of these programs may be unlikely to prevent homelessness over the long term. The short-term subsidies provided by HomeBASE and RAFT may do little to provide permanent housing for many families who earn too little to afford the high housing costs in much of the state. While a recent increase for MRVP can help families pay for long-term housing the amount of funding appears to be inadequate to help all of those who are currently living in state-supported shelters. Increasingly evidence has been pointing to the detrimental effects that irregular housing can have on the health and development of children.20 Until there are sufficient resources to help low-income families' secure affordable housing, the state's shelter system is an important safety net that prevents parents and their children from sleeping in places not meant for human habitation.

4For information on the state's adoption of the Housing First policy see: http://www.boston.com/news/local/massachusetts/articles/2010/10/10/mass_continues_push_to_end_homelessness_by_2013/

6DCHD caseload as of February 2013: http://www.mass.gov/hed/docs/dhcd/hs/ea/homelessnumberchart.pdf . As noted in this brief, caseload numbers may have dropped in part because fewer families are eligible to enter shelter with the changes adopted in FY 2013.

7Of the state's budget for shelter programs, including shelter for homeless individuals without children, the largest portion of goes to EA and to caseworkers who work with homeless families.

9Information provided by DHCD that the average monthly income of EA families is $629 which amounts to $7,548 per year.

13Averages compiled from data collected by DHCD between FY 2011 and January of 2013. The average from FY 2012 is higher than FY 2011 in part because of the increased number of families applying for rental assistance when HomeBASE first opened in the fall of 2012

14 In July 2012, the first month of FY 2013, 1,135 families applied for EA and HomeBASE. Once the initial eligibility changes went into effect, the number of families applying for these programs fell to an average of 840 families between September 2012 and January 2013.

15Based on DHCD weekly reports that provide information on the reasons why families have reported becoming homeless.

17October 26, 2012 letter to the Governor and Legislature asking for the expansion of EA benefits: http://www.mlac.org/pdf/EA_Regs_Sign_On_Letter.pdf. See also Out in the Cold: Homeless Children in Crisis in Massachusetts, Massachusetts Law Reform Institute, 2013 appendices 2 & 3 available at: http://www.mlri.org/uploads/12/fc/12fc1058ba4fdb3d0d4883d082aed86d/Out-in-the-Cold-FINAL.pdf

19The Governor's Issues Brief on the proposal to consolidate public housing authorities is available at: http://www.mass.gov/bb/h1/fy14h1/exec_14/hbudbrief10.htm