The Income Tax in Massachusetts

Income taxes are a form of tax that may be levied on various kinds of income, including wage and salary income, capital gains income, dividend and interest earnings, and income from rental properties. In Massachusetts, the income derived from any of these sources is subject to the state income tax, and almost all forms of income are taxed at a single rate, currently 5.25 percent (short-term capital gains are the one exception, being taxed at 12 percent). The income tax is the single-largest source of tax revenue for the Commonwealth, with collections totaling $11.9 billion in Fiscal Year (FY) 2012.1

THE INCOME TAX KEEPS OUR TAX SYSTEM FROM BEING MORE REGRESSIVE

As noted, the overall tax system in Massachusetts is regressive because the sales and property taxes are regressive. The chart below shows the overall tax levels of families at different income levels in Massachusetts and, specifically, the share of family income that is paid in income taxes vs. other taxes. What we see is that low-income families in Massachusetts pay a significantly larger share of their household income (9.5 percent) toward state and local taxes than high-income people do (6.0 percent). Notably, however, those with high incomes pay significantly more of their income in income taxes (4.5 percent) than do low income households (0.2 percent). 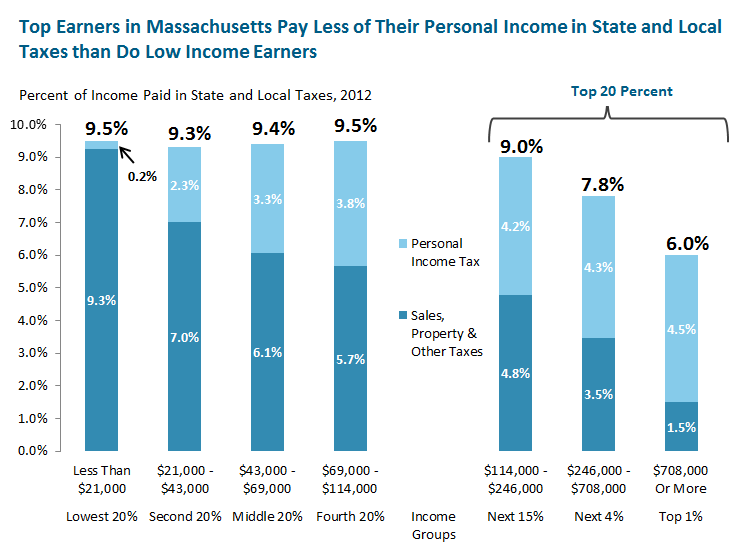 WHAT MAKES THE INCOME TAX PROGRESSIVE?

While many states and the federal government use a graduated income tax (a structure that taxes high incomes at higher rates than low incomes), the Massachusetts Constitution prohibits the use of such a tax. Instead, Massachusetts has a "flat rate" structure, taxing both low and high incomes at the same 5.25 percent rate. The tax rate, however, is not the only element that determines how much income tax a filer owes. Several other elements of the Commonwealth's income tax structure make the net effect of the state's income tax quite progressive.

The Massachusetts income tax--despite its flat-rate structure--is progressive in its results primarily because of four provisions, each of which reduces the impact of the income tax on lower-income families and individuals: 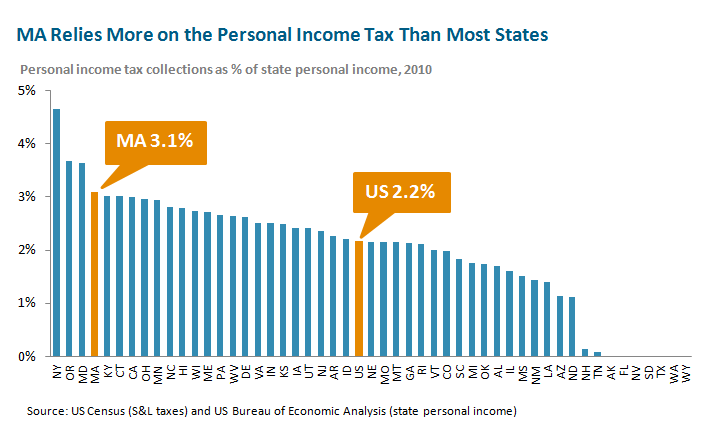 This does not mean, however, that Massachusetts is a high tax state. When one factors in all state and local taxes (not just personal income taxes), Massachusetts ranks below the national average. When we look at total taxes as a percent of state personal income (SPI), we find Massachusetts state and local governments collected an amount of tax equivalent to 10.2 percent of SPI in 2010 (the most current US Census data available for all 50 states). The national average, by comparison, was 10.6 percent.5 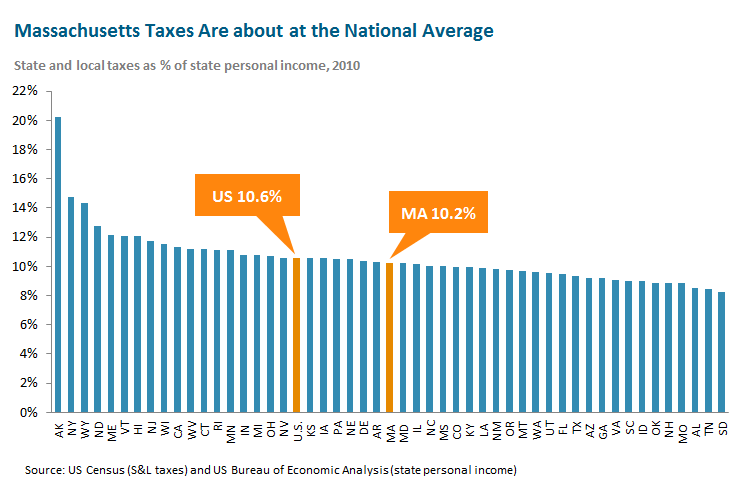 Massachusetts's heavier reliance on the personal income tax not only reduces the regressivity of Massachusetts's tax system, it also helps state tax collections keep pace with overall growth in the economy6; collections from some other important taxes - such as the sales tax - typically do not keep pace with economic growth.7 When growth in tax collections tracks the state's overall economic growth, the Commonwealth is better able to maintain its investments in the physical and human capital that provide the basis for the state's long-term economic success.8

In terms of top personal income tax rates, Massachusetts is again in the middle of the pack. As of 2012, Massachusetts' 5.25 percent top tax rate was 28th in the nation and well-below the highest top rate of 12.3 percent.9 It is important to repeat, in this context, that Massachusetts applies a single, flat rate to almost all taxable income. Many other states instead use a progressive rate structure, applying different rates to different income levels. A state with a higher top rate than Massachusetts, therefore, also may apply a lower rate on some income than Massachusetts.

WHAT WOULD BE THE REVENUE EFFECT OF AN INCOME TAX CHANGE?

COULD THE INCOME TAX BE MORE PROGRESSIVE?

The state's overall tax system results in lower-income people paying a larger share of their incomes in taxes than do higher-income people (when all state and local taxes, including sales and property taxes, are taken into account). Making the income tax more progressive would help to make the overall system more equitable.11 This could be done by expanding any of the four items categorized above. Similarly, since the income tax is more progressive than our other major taxes, shifting our tax system towards greater reliance on the income tax also would make the overall system less regressive.

5 See MassBudget Factsheet, Where Does the Taxachusetts Label Come From?, September 2012: http://www.massbudget.org/report_window.php?loc=FactsTaxachusetts.html

6 Personal income typically tracks growth in the economy (though during the last three decades, much of this growth has gone to upper-income households). See Institute on Taxation and Economic Policy, The Progressive Income Tax, July 2012: http://www.itep.org/pdf/pb41pit.pdf

9California raised income taxes on the top 1% of earners via ballot initiative in 2012.