Among the many cuts to important state programs over the past decade, Unrestricted General Government Aid (UGGA) has experienced some of the deepest. UGGA, or general local aid, is a form of revenue support that flows from the state to cities and towns, helping them fund vital local services such as police and fire protection, parks, public works, and schools (UGGA is in addition to Chapter 70 education aid, which goes directly to school districts). General local aid has been cut about 46 percent, adjusted for inflation, since FY 2001, leading to a wide range of local service reductions.

Under the Governor's FY 2014 proposal, general local aid would be increased for the first time in five years, albeit by a relatively small amount. While an important step towards reversing deep cuts, the Governor's proposed increase would only reverse a small portion of them (as shown in the graph below). 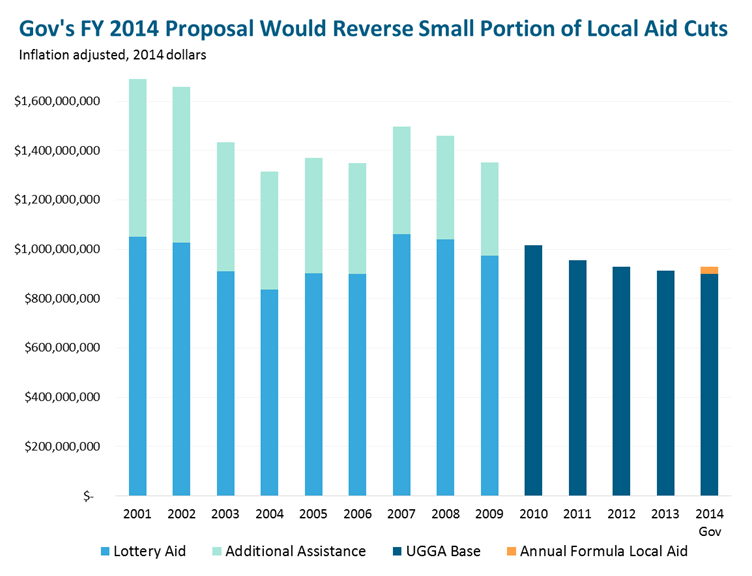 The Governor proposes funding general local aid at $31 million above current FY 2013 levels, with this additional funding channeled through a new distribution formula called "Annual Formula Local Aid." Overall, this new formula would distribute aid in a progressive manner with lower property wealth and lower income communities receiving greater aid. The first $899 million of general local aid, by contrast, would be distributed as a base funding amount equal to the appropriation cities and towns received every year since FY 2011.

While the $31 million distributed through this new formula represents a relatively small amount—a one-year increase that's just a bit higher than inflation growth—the decision regarding how to distribute this money may have a lasting effect in future years. Once a new formula is implemented, it is likely to last for some time and could be used for distributing increasing amounts of local aid for years to come.

HOW THE FORMULA COMPARES TO DISTRIBUTION OF PREVIOUS YEARS

For many years up through FY 2009, the state distributed two separate forms of general local aid, Lottery Aid and Additional Assistance. While the lottery formula is simple and directly progressive with respect to property wealth, Additional Assistance was mired by problems over the past couple of decades, distributing money across communities in a way that was increasingly hard to justify and understand.

Acknowledging that whatever underlying logic Additional Assistance once reflected had long since been lost, the Legislature in FY 2010 merged it with Lottery Aid and created the new Unrestricted General Government Aid program. This move to a single UGGA appropriation did not reflect a substantive reform of general local aid, however; UGGA has never had a formula of its own, since previous years' aid amounts have either been cut across the board (FY 2010 and FY 2011) or level funded (FY 2012 and FY 2013).

Defining local revenue capacity in a slightly more nuanced way, the Governor's proposal adds an income variable to the existing lottery formula. Since most taxpayers pay their property tax bill with money earned throughout the year (i.e. their income), ignoring different income levels risks oversimplifying the calculation of local wealth—communities with higher property values but lower incomes would be more strained in their efforts to fund local services. The Chapter 70 education aid formula has for many years used income measures alongside property measures in calculating local required contributions to school department budgets.

Policy discussions around reforming the distribution of general local aid have mostly assumed that a new formula should only be used for distributing new aid, rather than for also channeling communities' base aid. This is driven by a concern for stability, not wanting new policy changes to result in actual reductions for aid in certain communities. The Governor's proposal reflects this concern by only distributing through the new formula the $31 million increase over FY 2013 levels. By taking this approach, meaningful movement towards greater equity will take some time, as contested base aid amounts will continue to be baked into total allocations.

For more information on the history of how general local aid has been distributed, please see MassBudget's paper Demystifying General Local Aid in Massachusetts.